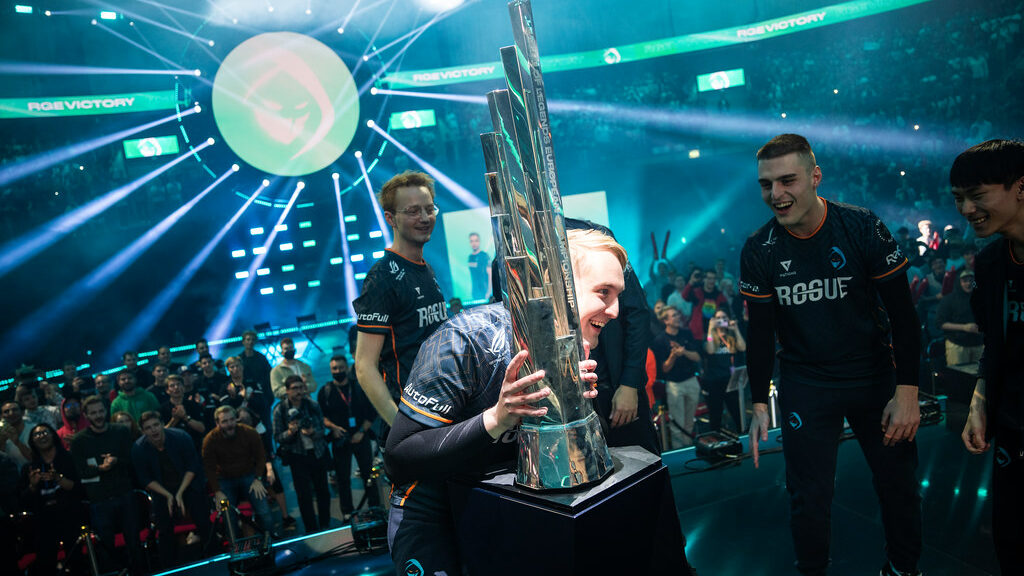 Trymbi: “No fun games at Worlds, every team has to be respected.”

Ahead of our pre-Worlds 2022 interview, Rogue and Adrian “Trymbi” Trybus made history in the League of Legends European Championship (LEC) after their 2022 summer finals victory. As the fifth organization to ever lift the trophy, Rogue engraved their logo on the LEC’s Champions Wall and in the league’s history. Previously considered “chokers” in Europe due to failing at the final step, the team finally overcome the stigma and silenced their haters in Malmö.

Worlds 2022 will be Trymbi’s second international tournament, and he is looking forward to it: from experiencing different cultures and playing against international teams, he can’t wait for the tournament to start. Find out about his journey for the whole 2022 season and his Worlds expectations.

Yohan: To kick-off the interview, I would like to ask you to reflect on 2022. Rogue always lacked this little ‘something’ to come up with the LEC title. However, this time around it was different. How did you do it, how did you find the answer?

Trymbi: It’s hard, I don’t know. Everything kind of aligned with what we needed. We were playing well, and we had a good read of what we wanted to play.  Overall, I think it was a different environment. The one that helped us out and I think for sure a little bit of luck with some of the stuff that happened.

Some things happened to be very good for us and that was nice. But I mean, obviously, hard work is important and we enjoyed being there quite a lot. Overall, we had a great time on stage, so I think that was also a big part. The stage was a huge factor for us to win.

Settling the score with G2 Esports at Malmö

Trymbi: Losing to G2 before the finals was not good. It was this kind of loss [where] you really get knocked down, and you’re not sure whether you should stand up or just stay there right on the floor.

Also, the loss in spring against G2 [Ed.: 2022 LEC spring finals]. When I think about it now, it’s also this kind of loss where you knew that you were good, but you didn’t really showcase it, and then the series ends. You are not sure how it happened and why it happened, and [you] think about the fact that you could prevent it, but it didn’t work. The whole season just ends like this.

I guess those are the moments. Obviously, I think the regular summer split was also not the greatest. It was one of those splits where we were not first. It wasn’t the normal Rogue to see.

Yohan: It was a great trade offer in the end. You were not first in the regular season, but you won the title.

Trymbi: Of course. I said it in every interview so far: I don’t really care if we are first or not. It’s about playoffs only. For sure it’s a great trade offer.

Yohan: And did the loss against G2 during the spring finals give you even more motivation? Did it motivate you to push even more?

Trymbi: It motivated me because we didn’t show what we are capable of. I wanted to make sure that, in the following split, we [would] try our best for playoffs to showcase that we are not the chokers that everyone talks about.

There was for sure a motivation, but also: seeing them win. I was thinking that it would be nice if I could do that too, experiencing the feeling that you could be the one doing it that day, but it didn’t go your way, and you are obviously upset.

Trymbi on finding balance in 2022

Yohan: Both splits were amazing from you individually. How did you manage to maintain such high-level performance throughout the whole year? Were there any sacrifices?

Trymbi: When it comes to the season in general, you want everything to go your way, but it doesn’t happen that much. I feel like this year I was quite upset with a lot of stuff. My mood was not the best throughout the year.

I felt like I was pushing more, and overall, I was not happy with things for the most part. So, there was kind of a trade-off. Obviously, I think I was not that negative. I think I was quite positive as I am usually. But it’s just the overall feeling: I was always not sure, always rethinking stuff. Always trying to push it harder.

But it was different. I can’t compare myself to players that play 20 games per day. I’m not [that] kind of guy: I hate playing solo queue to the level that I spam games. I hate playing on autopilot and refuse to do that because I think it’s very bad.

I try to do my best and get as many productive games as possible. You know, sometimes, there are days that you just don’t feel like playing. I tell myself: whatever, I can’t play, I have to do something else. Even if that “something” might look like slacking, it helps mentally to come back.

This year, I tried to take care of my mental health, and I have been doing a lot of different things outside of the game. It certainly helped me out, because I was trying to be more active with what I [was] doing outside of playing.

Overall, I tried out new things in my life when it comes to taking care of myself, and it helped. This year, I also got a better grasp of what my habits can look like. I think I was much more consistent in that as well and I felt like I could improve my gameplay alongside it.

Yohan: Now Worlds is coming up and it will be your second attendance. Would you say that you have picked up something from your previous participation that would help you with the tournament this year?

Trymbi: It’s not that easy to tell, because the meta changes every year. I’ll probably pick up new things. But I remember all the knowledge that I got throughout last year at Worlds 2021. It will be a different story now, though.

Last year, due to COVID, we had to go a little bit earlier to Iceland, which I actually preferred. When I heard that, this year, we won’t be going to New York that fast, I was a bit upset. Not only because of potentially scrimming, but also because of getting to travel and seeing new things. It is what it is.

We will get a couple of days to scrim against different teams from different regions. It’s about getting used to what it’s like to live there, the jet lag and the new schedule. Overall, making sure that you are ready.

Yohan: Do you think the meta during the Play-in stage will be what we should expect throughout the whole competition? Would everyone get a clear picture of the meta?

Trymbi: It’s not going to be the meta at its fullest when it comes to what they’re going to pick. During the Group stage, it will change a bit as it did for several years, but some picks will remain. At least, we will see how some teams view the meta currently, and it’s always helpful to check it out.

It’s not easy right now to have the clearest point of the meta.  Regardless of how much time we had to figure it out in Europe, I don’t think it will be the same. It will be figured out later and if we are cautious about it, everything should be alright.

Yohan: What was your reaction to the group that you got? I would say you have the best chance out of the European teams.

Trymbi:  I mean, still not the easiest group, but yeah, it gives quite a bit of help due to the fact that it’s not the best of the best teams. Still, we have Top Esports in our group, so it’s a tough opponent. Also, GAM are crazy and unpredictable and it will be a pleasure to see what they will prepare against us.

It’s hard to tell. When you look from the perspective of the other teams, I guess we have the easier group, but still not to be underestimated. I hope we will show what the number one seed from Europe should show, and not completely run it down or something.

We can put up a good fight and try to convincingly get out of groups, but for now, I can’t underestimate any of the teams. We will see if we are able to play our game. If we do what we are good at, we will have a good shot at getting out of this group.

Yohan: Does it give you more pressure to perform being the first seed from Europe? Does it make you a little bit more nervous?

Trymbi: Not necessarily. I already gave up on trying to think about the pressure. I think I put enough on myself anyway, from my individual standards. Regardless if we won, people still think that we have very little chance. That’s at least how it will be for the rest of the year, and people will still think of us as those chokers, right?

We are always underestimated when compared to other teams or when it comes to being in the higher spots. It’s a plus of being an underdog, but I hope one day this will change, so I can at least have the privilege of feeling the pressure that fans put on my shoulders. For now, I guess I have to enjoy the fact that we are the underdogs, so I don’t need to believe that there is any pressure from the fans toward us. At least, for now.

Patch notes have made Trymbi sad

Yohan: Nasus has been talked about a lot by you and LS. You’ve been teasing it as well with hovers. So, I am curious, are we going to see Nasus for Worlds?

I got baited like this a couple of years ago and I told myself I won’t look at those changes ever again. It’s just a list and whatever is on PBE stays on PBE.

I think the champ is quite strong when it comes to what it brings in the latter stages. I don’t think he is something that you can just blind and be so powerful. He has a lot of flaws and it’s not the easiest champ to pull off. But, I would for sure hope that I can pick it up one day.

I already put enough practice into it and I feel like I can have a good shot at showcasing what the champion potential is. I don’t know if it’s going to happen and I don’t really care.

I’m not going to force myself to pick it just because I like to play it or because me and LS were having debates/games with it. I don’t know if it’s going to happen in this tournament or not. I don’t want to be pressured to just pick a champion that I was teasing or I think was good.

Looks like a nice champion, but I have no clue if it’s going to be picked. Personally, I think I can pull a lot of champions right now, so I hope I will get enough practice to show good mechanics. If it’s going to be Nasus, we will see. No fun games at Worlds, every team has to be respected.