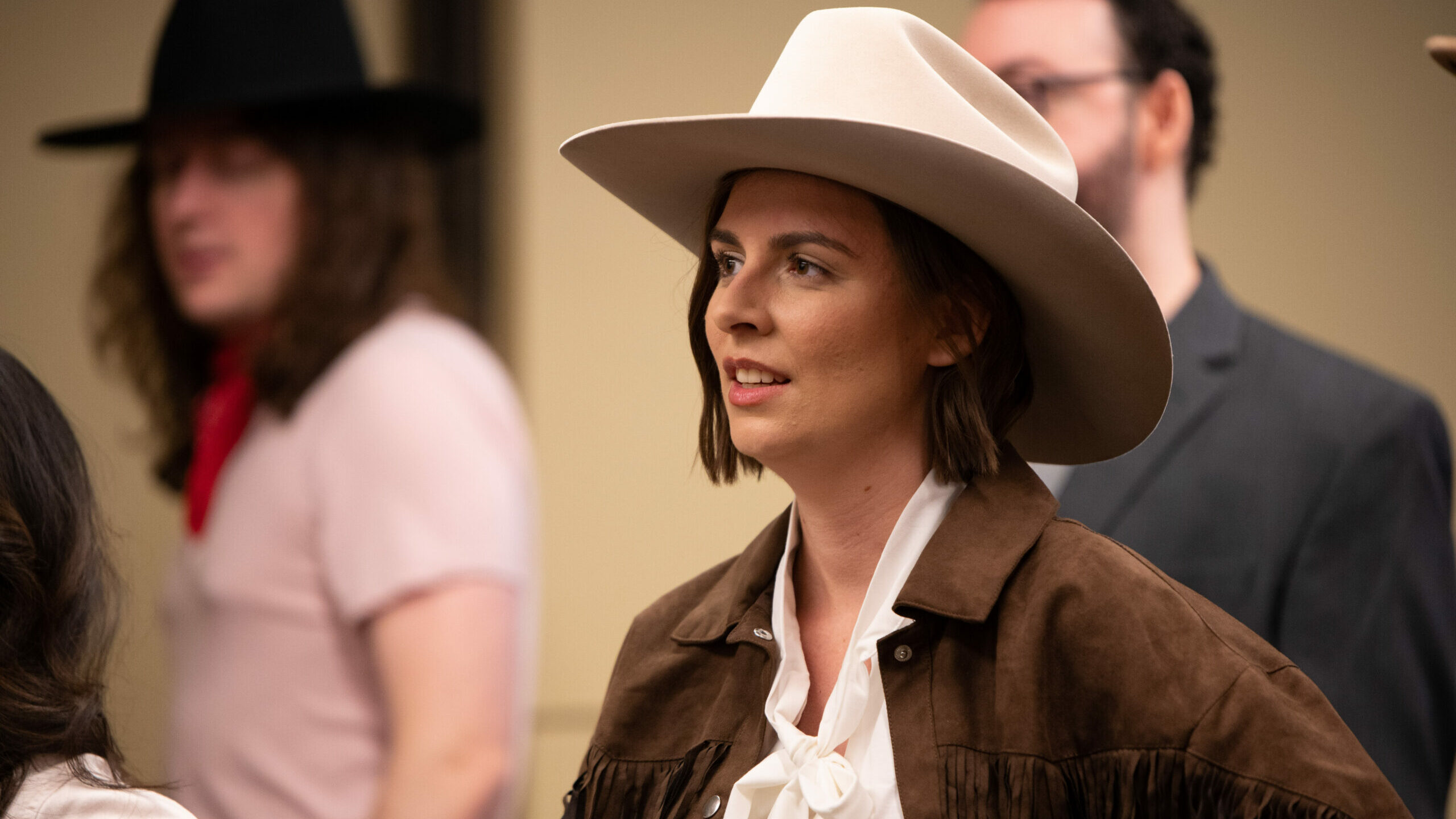 The International 2022 (TI11) begins tomorrow with twenty teams vying for the most coveted Dota 2 trophy — the Aegis of the Immortal.

We caught up with Alexandra “Sheepsticked” Roberts, one of the broadcasting talents at TI11, for a quick interview.

She talks about casting DPC SEA and rooting for BOOM Esports, but at the same time, wanting Entity to win TI11, the elements she brings to the table, and more.

Jaxon: Congratulations on securing the TI11 casting gig. How elated are you?

Sheepsticked: I feel amazing, I worked really hard this year on learning about the Dota 2 scene and getting better at what I’m doing so to see it all pay off with a TI invite is a dream come true.

Jaxon: How has your journey from freshly dipping your toes into Dota 2 casting to casting at TI11 been?

Sheepsticked: It’s definitely been a journey I can appreciate. I never really watched pro Dota before this year, would occasionally tune in to finals matches for Majors, TI, etc, or if I had nothing else to do I would watch whatever pro game was going on at a big tournament, otherwise I just grinded pub games all the time.

So coming into this work I felt (whilst confident about my ability to learn) nervous about how to panel and cast for a lot of teams.

My first panel for BTS SEA DPC, as an example, was with Avo and Godz who both know extensive amounts about the players and teams, whilst I had none of that knowledge. But getting fully immersed in it and spending an entire year just learning as much as I can about everyone has been amazing and I feel very comfortable nowadays with what I’m doing, and other talents are always really helpful and willing to give you facts and knowledge.

Sheepsticked: Last year in 2021 I got to attend TI10 to play in the All-Stars match, and whilst I was there Bruno was kind enough to let me go on a panel.

It was thrilling, yet terrifying, and was mostly extremely stressful because obviously, I hadn’t prepared for it at all. I did as much research as I could the day before but overall I didn’t know as much as I wanted about the teams and their drafting, playstyles, etc, to feel comfortable.

I’m someone who tries to do the maximum amount of prep possible so I can avoid getting caught off guard, so that panel was something else. It went well enough though and I was happy and motivated to do more work.

Going from that to now, when I’ve got absolute pages and pages of information on most teams and players, and the experience of panelling and casting for multiple regions under my belt, feels really good. I’m happy with every step of my journey.

At the beginning of covering DPC SEA, I’d reached out to a lot of people and gathered as much information as I could on the region’s culture, but I felt like a fraud even mentioning some of their memes, for example, because it wasn’t a region I had come from and I didn’t truly know the origins of what I was talking about.

But after covering DPC SEA for 3 tours and getting to actually interact with the players and teams and fans, and being there as new memes and jokes came about, you really feel involved with it and I’m way more comfortable talking about everything now. Helps that SEA fans are the best and are super welcoming, they’ve been awesome all year.

I got to cast for the DPC SEA Regional Qualifiers too and I enjoyed just trying out everything and getting to feel the differences and challenges that come from every part of covering Dota.

Learning how much I need to prepare and how to streamline that process, what the most efficient pieces of information to convey are for how much time you have on each part of a broadcast, how to gel with different talent, and so on, it’s all been cool to figure out.

Jaxon: From your perspective, what criteria made Valve extend a TI casting gig to you?

Sheepsticked: Obviously just because I’m a girl Kappa. But seriously, I’ve been in Dota since 2014 and have been contributing to the community with artwork, streams, videos, and memes for years.

Whilst I wasn’t massively known before this year I think my name was out there and that got me a chance to get to TI10, then to the DPC, and from there I’ve worked hard to prove myself.

Arlington Major gave me the chance to show I could perform consistently under pressure with a crowd and I felt really good working there. I’m guessing Valve was happy with my performance which is why I got the TI11 casting gig.

Jaxon: How do you see yourself fitting into the vast pool of English talent recruits for TI11, and what element are you hoping to bring to the viewers?

Sheepsticked: It’s definitely a little new because I haven’t worked with some of the other talents before so I’ll need to try and adapt fast. However, I’d say I’m really good friends with most of them so it shouldn’t be too hard.

At Arlington, Lizzard, for example, was extremely accommodating and did an amazing job of helping to prop my ideas up on the panel, since I always came up with talking points and notes that I wanted to cover. He was amazingly helpful and supportive.

I love love love the English talent so much that I’m so excited to work with everyone.

For elements I want to bring to viewers, I highly value pro players and everything about them, so it’s what I try to value the most when preparing for events. If I can watch/read interviews, watch their streams, or even talk to them, then that’s invaluable information to be shared on the panel.

Whilst it’s nice to imagine people might like me, the viewers are here for the pros and their games, so if I can share a thing a player said or thinks about the game, or their team and how they interact with each other, it’s that little extra glimpse into their lives that makes them more human and I think it’s the best thing you can give to an audience.

In general, though I just try to know as much as I can in general. If a new hero is rising it’s cool to know where it came from, like Chen’s uprising at Arlington after Puppey spammed it at the Riyadh Masters. It’s not always clear-cut though or easy so I just want to do what I can and of course, panelling and casting isn’t a one-person show, you can always rely on everyone else to bring awesome stuff to the production too.

Jaxon: Speaking of talent, a lot of new faces have landed an opportunity to showcase their on-air persona. Which new faces are you looking forward to casting with or simply observing casting, if given the chance?

Sheepsticked: I wasn’t in the timezone to watch much DPC CN this year so I’m excited to watch Snare properly for the first time. The bits I saw from him were always stellar so I’m happy for him to be at TI11 and can’t wait to watch. He’s got a really cool style.

Which team is she rooting for at The International 2022?

Jaxon: How about this year’s teams? Which teams are you looking forward to seeing the most?

Sheepsticked: Always gonna rep my favourite SEA team, BOOM. Some of their players have never been to TI before so I’m really excited for them that they made it. Japoy on the main stage let’s go!

Other than them, I’m personally rooting for Entity to win it as I love their playstyle and Stormstormer is one of the nicest dudes I’ve ever met. Team Liquid is my favourite team in general so really looking forward to seeing them perform.

I’m also always looking at beastcoast because that team makes the most insane runs and knocks out the wildest teams before they burn out.

Jaxon: You’re one of the people who are well-versed in the analytical side of Dota 2. What made you pursue that angle rather than play-by-play, or what is just happenstance?

Sheepsticked: I’m just not that interested in play-by-play. I actually toyed around with the idea for a while when I was re-watching the famous ‘The Play’ clip, because it had a really unique flair to it utilising story-telling in a lead up to the actual fight.

I could be wrong as I don’t watch that much casting, but it feels like no one is really doing that sort of casting anymore and personally that descriptive style of story-telling really appeals to me.

I thought about if I would be able to do play-by-play and create a similar style, but in the end, it would be a lot of work and I wasn’t confident I could get good at it in a reasonable time frame, and there’s all the extra work that goes into good play-by-play like getting voice training too to consider.

Analysing just suits me better for now, and I love telling the stories of teams and players which is easier for a panellist.

Jaxon: How do you see the meta evolving throughout TI11, and which regions might surprise us the most?

Sheepsticked: It will be awesome to see how China does at TI11. Thunder Awaken has been having a good year and beastcoast usually turns up at LANs, so maybe SA will rock the boat too. I’m sure most people will just be looking to see if a team other than Spirit or LGD take the aegis.

The meta is always unpredictable, I don’t know what I could say about it haha.

Omniknight looks like he’s rising in popularity very quickly, so maybe we see adaptations to that like Shadow Demon popping up more, and then you have the personal metas surrounding the teams that get really far.

BetBoom and Entity will probably be bringing a lot of Visage. Also, I’m just saying, but Magnus did get a cheeky buff in the latest patch.

Jaxon: Lastly, how do you see yourself doing in Dota 2 in the next few years (many say that it’s dying)?

Sheepsticked: I’ll be giving my all to any event that I attend in Dota. People have been saying that Dota is dying for maybe 4 years now and it’s still doing fine, especially on player count.

A lot of retirements are happening after this TI like Matumbaman and Faith_Bian, so maybe that has a chain effect, but there’s loads of young talent too like in OG so I don’t think it’s all doom and gloom.

In any case, I’ll be working on my own projects on the side. It makes sense for anyone to always have stuff to fall back on. For now, I’m happy to give my best to Dota.