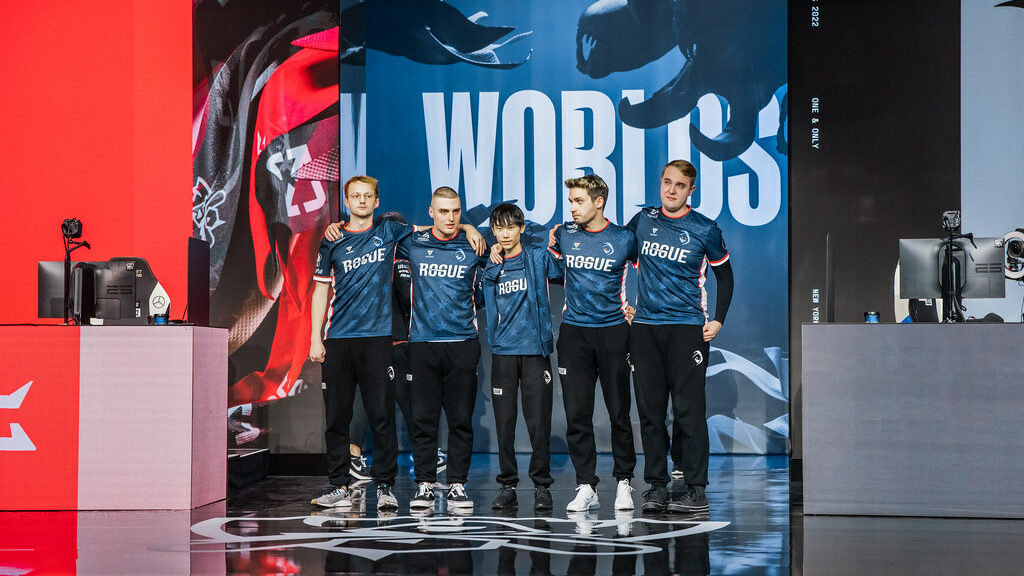 Worlds 2022: What Rogue can learn from losing to JD Gaming

Despite losing against JD Gaming 3-0 in the Worlds 2022 quarterfinals, Rogue can return to Europe with plenty of lessons learned and a sense of accomplishment. After their bittersweet GAM Esports-fueled qualification in Week 2 of the group stage, the team has shown during the playoffs that it has progressed.

Indeed, rather than getting annihilated as other European and North American teams were during the group stage, their losses came down to minute yet crucial details—the sort of detail that world-class teams have mastered to a better extent than EU and NA in 2022.

As such, their Worlds 2022 match against JD Gaming was the best crash course into “becoming a world-class team” that they could have received—one that they would do best to take into 2023, preferably with the same roster and coaching staff (if not with additions in the upcoming KOI era).

As for the lessons JD Gaming taught them, they are as follows:

Rogue’s Game 1 lesson: every plan has counter plans at a fundamental level

Rogue’s early Lucian-Nami draft telegraphed their intent to play around the side lanes, secure a heavy lead there (especially using Renekton top and Lucian-Nami bot in those matchups), and starve off JDG. Instead, JD Gaming’s Level 1 Red-Side jungle invasion threw a wrench into what all aspects of Rogue’s draft needed most: synchronizing wave states with Vi’s initial clear.

In simpler terms: JD Gaming played a Wild Draw 4 UNO card on Rogue, and Rogue had no card in hand to stall JDG from winning.

Without countermeasures, Rogue was off kilter for the rest of the game, constantly reacting to their opponent’s moves. Despite that, they performed well given the circumstances, but JDG’s victory was assured from Level 1 onward bar fluke events and bugs.

Game 2: Every choice has a consequence (Difficulty level: extreme?)

Once again, Rogue telegraphed their intent through Lucian-Nami, but JD Gaming did not need to worry about a strong top lane matchup this time around. Instead, both teams know that bot lane is where the party is—especially as JDG selected the high-pressure Aphelios and Lulu tandem.

Rogue’s ability to internalize what had happened, and adjust accordingly, was likely absent as those events may have been overlooked. However, JD Gaming gained the following pieces of information well before Kanavi’s Viego pathed bot-side:

Rogue’s jungler, Malrang, prioritized taking down Red Buff over ganking the lane and was unable to cover the lane in time. There are many what-ifs (such as “what if he ganked the lane before Missing placed vision?”), but the situation was unrecoverable.

JDG’s ensuing towerdive (and favorable 2-kill exchange) did irreparable damage in the bot lane and took the lead on Aphelios, one of the best scaling champions in the game, and spiraled out of control.

What Rogue had in resilience, they lacked in their foresight and attention to detail—and JD Gaming punished them. One can hardly consider accelerating Maokai’s progress as a solid fallback early-game plan, as he couldn’t prevent structures from falling left, right and center.

Game 3: Every positioning choice has a consequence—but you already know that, so keep learning

In Game 3, 2022 LEC winners Rogue joined the Worlds lobby at last: they showed that they had learned their lessons from the previous losses to some extent, and they played to their strengths. However, their fate in Game 3 was a loss despite securing a strong lead.

The mistakes that Rogue made during team fights (specifically Comp) would have gone unpunished in Europe, but JD Gaming’s teamfighting is so refined that minute blunders (a slightly aggressive Lucian dash) resulted in a major punishment (through Ornn’s ultimate, or other means at JDG’s disposal).

Every choice from Rogue’s back line and front line during teamfights had dire consequences (or great ones in the ones they won). In the end, JDG’s alertness during crucial moments bested Rogue.

However, Game 3 alone proved that Rogue had reached a satisfactory mark at Worlds 2022, as they matched JD Gaming as equals. That alone should provide solace for European League of Legends fans, and for Rogue (or should we say KOI) as they approach the offseason and the 2023 LEC season.