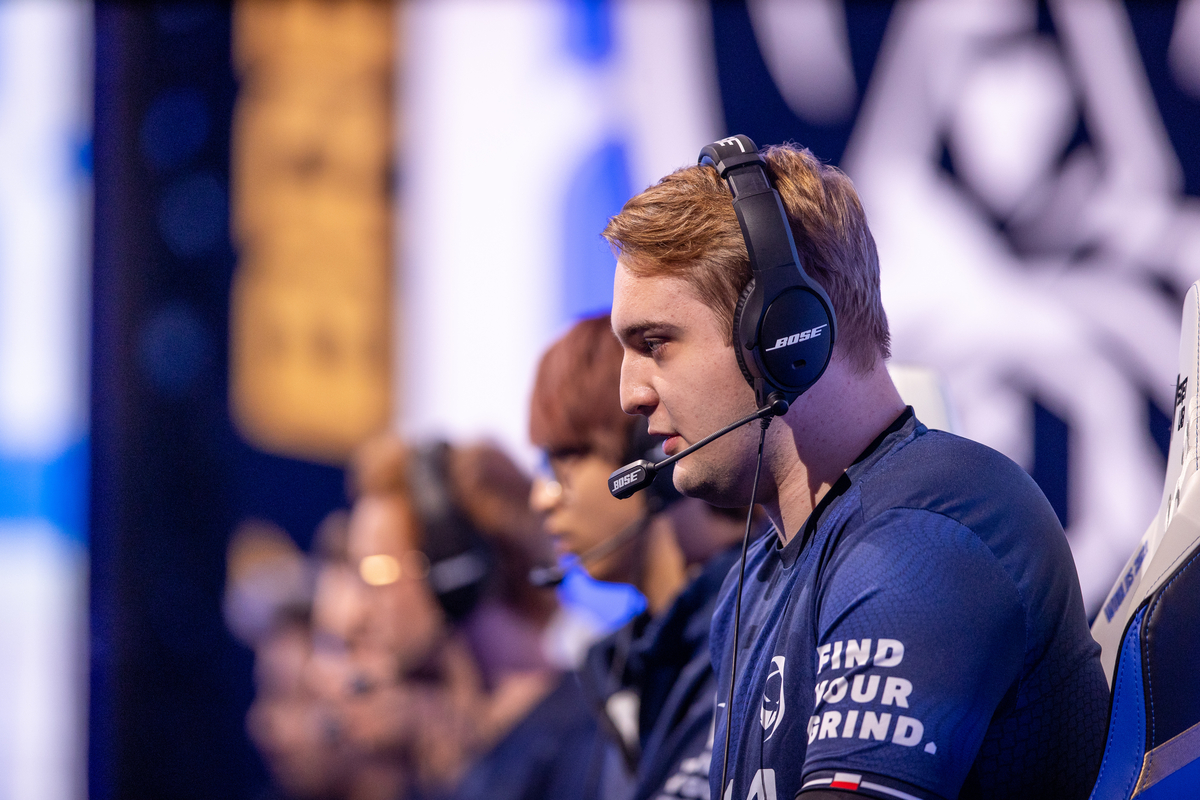 Among the LEC representatives at Worlds 2021, Rogue has performed the best with some really close games against DWG KIA and FunPlus Phoenix. Despite losing two times and being third in their group, Rogue showed some promising gameplay before the final round of the group stage set to take place on Oct. 15.

Rogue’s support Trymbi joined Jaxon to give his thoughts on their current situation and their performance throughout Worlds.

Could you tell me what are your takes from the first round of games in your group?

I think DK and FPX are for sure really good. Today’s game (vs FPX) was a little bit tough from my perspective, but I wouldn’t say they are unbeatable. From the support way of playing, it was hard because I died Level 2, so it was basically unplayable at the later stage. This game wasn’t showing too much how we can play because the game was decided due to my death mostly.

Other than that, yeah, I think DK, FPX, C9 are all good teams, and it is going to be a challenge to match them and win games. Obviously if we don’t win, we are not getting out of groups.

I wanted to talk a bit about the DK game. Even though you lost, you guys had a really good game. You lost in the early game and in the mid-game, but what was the reason that you guys came back because we have actually never seen you comeback with such a big deficit?

For sure, one of the biggest reasons was how Hans sama was playing. I think he was really good in that game, and also today [Ed.: against FPX] he was stepping up as well. Another reason is that we tried to not give up too fast because I think yesterday’s game against DK would have been a remake if it was a scrim game. Considering how we played in the early stages and the laning phase of that game, it was just unplayable.

I think besides those early deficits, we still try to do something on the map unlike before, when we used to be more passive and wait for the enemy's mistakes. Obviously, we still wait for them, but right now we are more aware of what we can do as a team, and everyone is trying their best. The fact that we didn’t have too much tools to play but still tried and, at some point, it didn’t look that terrible, is really nice. There are three games to go and we will see how it goes.

The gamechanger against DK was the flank at the end. How would you have approached that Dragon team fight differently if you knew about the flank?

I would say that it would be still hard to play around because I think I didn’t have any wards, and I was playing Nami, so it was really hard for us to maintain any vision and to try to figure out what the enemy was doing. We were on a timer where we had to facecheck, or we either lose the drake or, they TP to our nexus and end the game anyway. We had to do something and, unfortunately, we didn’t know about it.

That said, I don't think it would have changed anything because we didn’t have any information on anyone from the enemy team so they could have camped us in any other bush. I don’t think it was a mistake or anything.

I think the game could have been easily won if Hans gets the kills that he almost got on mid lane. It was just unlucky that he didn’t have enough damage to kill both Talon and Aphelios. I am pretty sure we kill them both there if he kills Aphelios, and we just end the game. It was the unlucky part of that game, but we cannot really blame anybody for that. The game was pretty much lost in the early game so the fact that we almost won was pretty impressive.

How does it feel for you to know that you can come back from such deficits? Do you think it improves the mentality of the team?

It for sure helps because we basically never had competitive games like this. There were some games, for example like our game versus Misfits. We got one good Fiddle ult and we basically won the game out of it, but it is not a comeback that you are really satisfied with, besides the one doing the play.

I think it for sure helps because you understand that, even against the best teams, you are able to actually try and maintain some calmness to try your best and potentially win the game. Even though it feels absolutely lost, it is still doable so it is for sure nice.

Obviously, I don’t think we as a team like when we are at a deficit because we were always the guys who had some lead in the early game. That is, for sure, something that’s a bit different than usual, but we are trying our best, and I think we are for sure doing better in the mid-game. Although we are losing the early games, it doesn’t matter because, at the end of the day, what matters is how you play as a team and how you can get some advantages in the mid-game to try and win it as a team.

It's your first Worlds competition and you have made a huge jump this year from Ultraliga to Worlds. How does it feel now to play against two world championship teams?

It for sure feels really good. The supports are really good and they know how to play the game. They force you a lot to think what they want to do and how to counter it. It’s really nice to play against them, and this is something that you don’t experience much in EU. All players are chilling a little bit more than they should, so it is really nice to see how you are being pressured and also how you can think of countering them.  If for sure helps to improve.

At the end of the day, I wouldn’t like to lose too many games to those guys, so it would be nice to win now, but we will see how it goes. Today’s game was a bit dummy I would say. If I could have been a little bit better, maybe we could have done more. If I could do better as I always do, it would be for sure an easier game but unfortunately, I think Crisp 1v9ed today. I need to step up for sure, and it would be nice to win some games. We will see if we can get out of groups, which I think is possible.

A lot of people were saying that it would have been better for RGE to start from the play-in stage, can you tell me your opinion on that?

Honestly, I don’t know. That’s something already in the past, and I don’t think it would matter too much. Obviously, there would be some more games, but there would be as well games where we don't really play against the best possible teams, so it would be a bit flippy. Also, I feel like we started practicing pretty early anyways.

I wouldn’t really see much difference between us going from Play-ins to here. I think it is whatever. Even if people think it would have helped us a lot, I don’t think so. I mean, it could obviously, but I can't really go back to the past and see if it would actually happen.

Mid-game has been a big problem for Rogue in the LEC, but now you have shown a different mentality. What was the preparation for Worlds that allowed you to change the team environment completely and help you with what happened in the LEC?

We tried to get a better structure on how we want the things to go during the game and outside of the game. That was the main reason why right now it is a little bit better. I feel like we allowed ourselves to make more mistakes to get some advantages out of it and just improve. Normally, I think for the last year, we are a bit too negative about the mistakes, and we are really not getting anything out of it. Right now, we are more aware of the situation. We cannot really play 100% always and try to be the best version of ourselves, although everyone would like it to be.

Right now, we are kind of allowing ourselves to get more mistakes so we can actually learn from them, and it for sure helps in practices. I just think we are more aware of what's happening as well. I think everyone stepped in to try and get better results and overall, just to become a better player.

I am not sure if we are the best version of Rogue right now. I don’t know, but it looks really promising, and if we can get the laning phases that we always had, it will for sure look better. Overall, I think the practice was really good and we got a lot out of it.