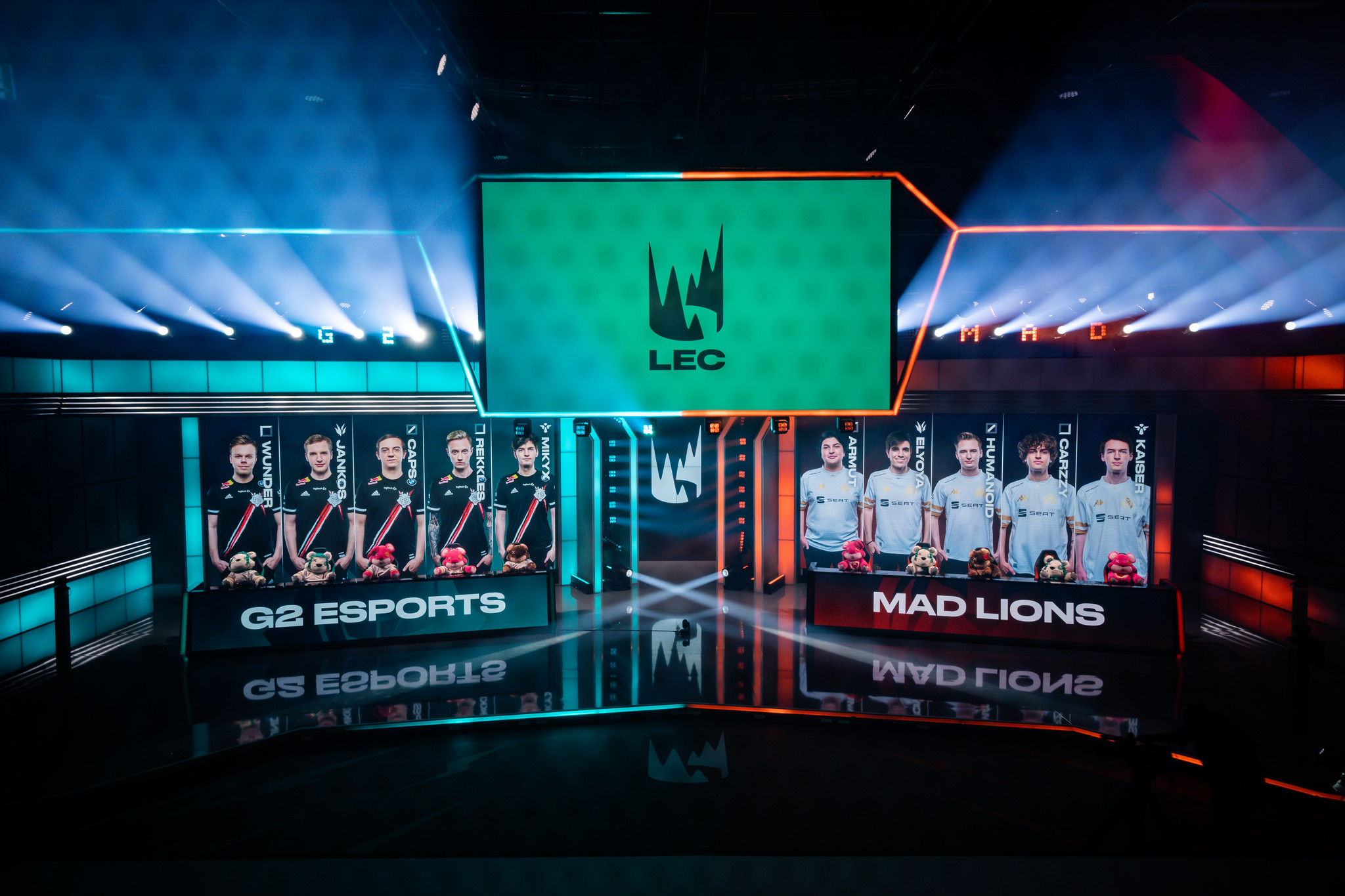 Blasting off we go into the 2021 LEC summer split—roster changes, MSI semifinalists, contenders and all. Teams sought to convince others—or themselves—of their viability in the league, leading to a tense Week 1. Eventually, some teams fared significantly better than others on the standings.

However, the standings do not tell the full story: strength of schedule, roster changes and injuries, and overall level of play are more important in the big picture and as time goes on. With that in mind, and based on Week 1 showings, we ranked the teams as follows:

MAD Lions have defied initial predictions with a strong start, showing the importance of proper rest in a tight competitive schedule. Indeed, after they reached the 2021 Mid-Season Invitational Semifinals, they took a break from competitive League of Legends until three days before the summer season’s start.

Humanoid had the strongest performances among all players on the roster, with a combined KDA of 13/6/15 throughout the first week, and with a show-stopping display on Akali against Fnatic serving as the exclamation point on a great summer start.

Despite losing a game to an awakened Fnatic, Rogue are tied with MAD Lions thanks to a strong Week 1 showing. In Rogue’s case, their top-notch macro and execution across all stages of the game propelled them to relevance early in the summer split—often turning games into unrecoverable states using that alone, as was the case against EXCEL Esports.

Greater than the sum of its parts, Rogue thrived when it controlled the game’s flow with synchronized pressure (when adequate) across all lanes. However, the team’s drops in focus levels may be worth noting, as was the case in a game they could have won more handily against Team Vitality. At least, Odoamne has learned one thing out of that game:

Welcome back, G2 Esports. We missed your presence for too long—clowning around and all. We also missed the inevitability of losing a game to Schalke 04 Esports during the regular season. Speaking of which, we would like to give a special shoutout to Wunder for enduring that map split and the tilt that ensued—hope you were able to take your frustrations out on Burning Crusade.

But for what it’s worth, G2 Esports had a solid return to action. Nitpicks about the way they lost to Schalke 04 aside, they are here to stay—as long as no more than one player runs it down at a time. As for Wunder's 0/7 stat line against S04, it was duly noted.

Misfits Gaming are the top team in the standings thanks to their team fighting, but they must improve to climb through the power rankings. Indeed, erratic actions in their games against SK Gaming and Fnatic could have cost them those games instead, leaving them at a 1-2 record.

A team may be greater than the sum of its parts, but Misfits’ individual strengths (specifically Vetheo and Kobbe’s strengths) willed it to its current spot. Along the way, Vetheo’s KDA ratio has reached critical levels: 22/2/15 overall, with a 18/2/10 KDA on Akali (a future permaban against him). At least Rogue knows something that Misfits's opponents didn't...

Don’t let their 1-2 record fool you: Fnatic have shown signs of improving from the spring split, with Jungle Bwipo as the spearhead. Although Bwipo blundered his way into MAD Lions’ roaming/ganking parties, his showings were overall convincing of his status as a LEC-ready jungler.

In addition, Adam has needed little time to adjust to the LEC. Of all the deaths he conceded, only one of them showed a lack of awareness of the danger levels that an enemy jungler’s moves would put him through. As he gains more experience, Fnatic will be primed to make trouble for the Top 3 teams (MAD, G2, and Rogue).

The L9 crew has arrived, as the diamonds in the rough that they should be: amazing individual play with the occasional lapses of map coordination in the early game. An improvement in the early-game would torpedo them near the top, but it requires patience—from themselves, and from the community.

LEC viewers have already seen Vitality’s potency when they secure an early-game lead at Schalke 04’s expense, but Vitality need more than that to contend for the title. If nerf gun battle royales is what this group needs to gel together on the rift, so be it.

Holy shit we just lost our first game, time for FFA deathmatch at the office

Astralis earned its record with two victories over struggling teams, but those teams exposed AST’s indecision and execution-related inaccuracies during team fights and around objectives. Against stronger teams, especially Team Vitality, one series of mistakes is all it would take to throw a large lead and lose the game.

To Astralis’s credit, the squad is much improved from its spring split self, with teams going the extra mile to upstage them. No longer pushovers, MagiFelix’s Astralis have strong solo laners, a decent jungler who managed to win two LEC games with a broken left hand, and a serviceable bot lane (at least when promisq isn’t running it down randomly).

Beyond the reported sale of the team by 2021’s end, Schalke 04 are either unlucky or unable to restrain themselves, causing them to fumble twice in Week 1. Isolated incidents have derailed their first week significantly, causing their power level to be an unknown variable.

Broken Blade was Schalke 04’s sole consistent asset in Week 1, guaranteeing a lead in lane until his teammates’ woes spiral over his way. Against G2 Esports, in the sole game where they gained a lead and stuck to executing their game plan by the book, Broken Blade’s top lane difference (starting level 5 onward after forcing Wunder to recall) led to a memorable victory. That victory, and the fluke-like ways in which they lost their other contests, would highlight promise instead of a grim future for Schalke 04’s lineup.

A classic Schalke start to the #LEC Split pic.twitter.com/YFHqtH7YAx

Excel Esports’ revamped roster has yet to fully gel in the summer split, its macro in the early game suffering as a consequence. Rogue ran circles around them through strong laning and well-timed pressure (and forced recalls), and Astralis’s better team fighting was also a pain point.

With changes to its mid lane and support positions, and a patch change that reined the game towards Excel’s strengths, expectations are high regarding their performance level as the split progresses. In some ways, they showcased that in their matchup against Team Vitality. But they will need more than that to make the playoffs. Maybe more games with Kryze on Ignite-Teleport Wukong? Oh wait...

Never playing ignite top ever again trust me on this one

SK Gaming’s 0-3 start could have been more disastrous. Indeed, they have faced tough circumstances since the offseason: TynX’s benching, Treatz’s swap to the jungle, Jesiz’s return as interim support, Blue’s illness, and Twohoyrz’s emergency arrival. Nevertheless, they did their best and showed signs of life.

Alongside Treatz’s relatively impressive timings, Twohoyrz’s laning and roams provided a lifeline to SK Gaming until their nexus exploded. In fact, victory slipped away from their fingers against Astralis—a promising development. Their clash against Schalke 04 may prove interesting should they improve their team fight coordination.

would've had more pressure in lane if i hit my E's, and we would've killed them lvl 6 if i hit my E as well, but i have no hands!!!

but on the bright side, regardless of the 0-3 week i feel a lot more comfortable and next week is BLUE angle