Global LAN events are always interesting to watch, as the metas from multiple regions clash. At Masters 3, we're seeing which region has the best strats for this ever-evolving young esport.

The overall professional meta will continue to develop as buffs and nerfs come to the game. Viable characters might fall out of favor and underpowered agents could dominate in the future.

For now, we have a relatively clear look at how the professional meta looks - at least in terms of which agents teams are playing.

As you can see, Jett is still the most dominant agent in the game. Almost every team has a Jett on almost any map - with very few excetpions.

Sova's pick rate has dipped a bit, but that's likely related to the lack of Sovas on Split and the increased pick rate of Skye, who has a similar kit.

Still it's clear that Jett, Sova, Skye, and Astra are four agents that some teams consistently play, with Astra, Skye, and Sova getting dropped on specific maps.

The middle tier of Killjoy, Viper, Sage and Reyna/Raze all seem to be map dependent. Viper has been replacing the Astra pick on Icebox for most teams - with some playing her on Split as well.

To me, it's more interesting to look at the bottom of the picks. The Yoru experimenting seems to be over. Teams just aren't playing him when it counts.

Phoenix, who was once considered one of the best dualists in the game, hasn't seen any love either. 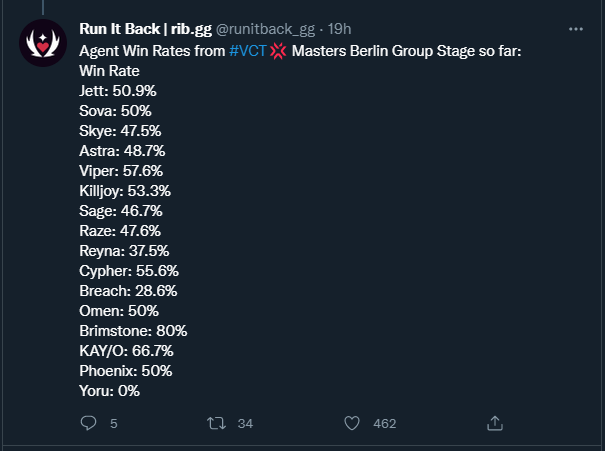 Riot have a history of balancing Valorant from the top down, meaning they focus on what's happening in the professional scene.

Jett has needed a nerf for a while, but she will probably never fall out of favor until another Operator-focused agent comes out.

We'll keep an eye on the stats as Masters 2 continues and see if anyone deviates from the plan in the playoffs.