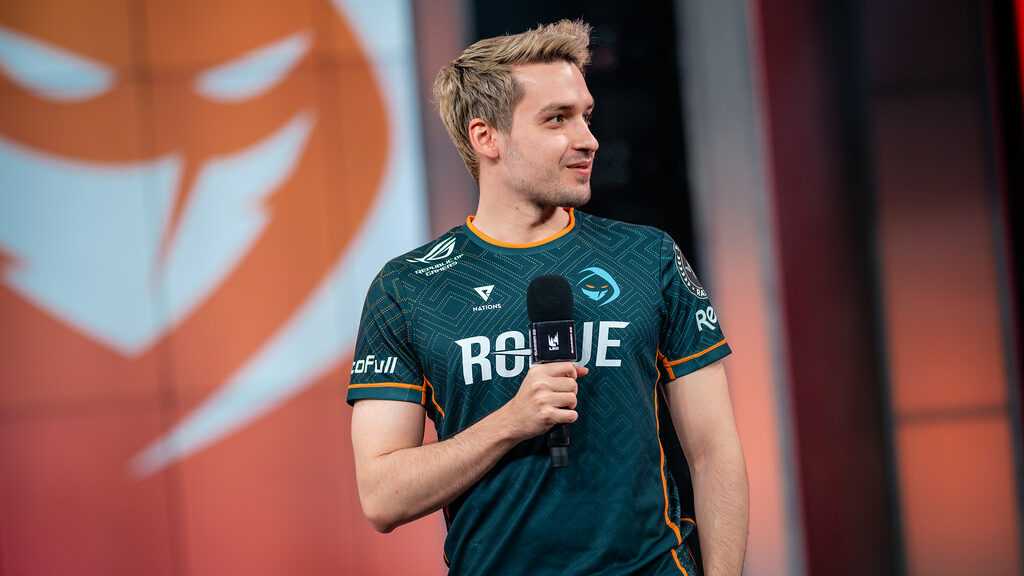 His revenge will be swift

Odoamne looks forward to facing MAD in the LEC finals

Following a successful bo5 series win against MAD Lions. Rogue and Odoamne qualified for the upper bracket final of the 2022 LEC Summer playoffs. With the win, Rogue has also locked their spot for the LEC finals in Malmo, where they will experience playing in front of a huge crowd for the first time ever.

Despite being in a losing position, Rogue found their way back in the series and won 3-2 in the end. The start of the playoffs was everything that the EU fans wanted, and so far, all playoff games were intense.

After Rogue’s victory, top laner – Andrei “Odoamne” Pascu – sat down with Jaxon for a post-game interview:

Yohan: Congratulations on the win. That was some intense League of Legends there. Can you share your first thoughts about the series?

Odoamne: Honestly, I’m not too tired.  Even though the series was long, intense, and filled with bangers and a lot of action on the map, I feel pretty good. I’m glad that we stepped up and constantly felt throughout the series that we should win.

Sometimes it did feel like we were kind of inting and losing and level ones didn’t help us either. It was a bit hard in Game 3 & 4 with those level ones, but it feels pretty good.

We locked Worlds with this win. However, I’m not really thinking about it too much because we have other things to worry about right now. But it does feel nice to qualify to Worlds on your own merit and not because G2 would beat Misfits and auto qualify us and MAD Lions.

It’s a pretty lame feeling if we lose today and then tomorrow G2 beats Misfits.  People would react like “Wow you are going to Worlds”, but I wouldn’t be too happy if it happens that way. I am a lot happier that we [Rogue] got this qualification with our own hands.

Yohan: But it does feel like a relief to lock Worlds, right?

Odoamne: Yeah, it’s great. I just don’t want to look too far ahead because I feel like a lot of teams stop after they qualify. Psychologically, there is a chance that once you qualify for Worlds, that’s it. The grind is over, the job’s done. I don’t want this to be the case with us, that’s why I think this way.

Yohan: You’ve had a lot of bo5’s in your career. Was this one of the most intense series you’ve ever played?

Odoamne: No, I don’t think so.  Actually, I felt pretty chill during the whole series. As a unit, in Game 1 comms were a bit messy and there was a bit of pressure just because of our communication. It wasn’t making our job any easier.

Throughout the series, communication got better for us and everyone settled into a comfortable spot, where we could actually play the normal way.

For example, the series against Fnatic when we reversed swept them, that one was a lot more intense. This one I felt like was just – Yup. I didn’t feel the same amount of pressure that I had against Fnatic.

Yohan: Rogue was losing 1-2 in the series, and there was a moment during Game 4 where it looked like it was over. However, you turned around the game and won. What do you think happened there?

Odoamne: Yeah, the game was going bad because of level one, our bot lane didn’t have fun again. I think I also entered the fight at Herald where I kind of died for free. MAD was over eager because they were looking to dive me on bot, but Gwen made a mistake and I got the chain CC on her when she was tanking the tower.  I suppose she tanked four tower shots, which left her at 20% HP and their whole team suddenly realized that they didn’t have a wave and Gwen was low HP, unable to fight.

They were so deep in our jungle, very overextended and that was our ticket to get ourselves back. I am happy we had the tools to punish them, I got a really good Ornn ult, the team rotated very well and we were given the opportunity to make a comeback back.

Yohan: During Game 3 you banned Teemo, what was this ban about?

Odoamne:  We had a completely free ban and Larssen didn’t want to ban a mid-laner, so he just banned Teemo instead. That was pretty much it. I guess mental-edge.

Yohan: Rogue has qualified for Worlds, and also Malmo. It’s been a long time since you played in front of a big crowd. Are you excited?

Odoamne: Definitely! This is my second year with Rogue and it’s been a good one so far. Even last year we had great moments, we made it far throughout the season and playing a final online or in the studio doesn’t feel nearly as good, you know?

When I started all the way back in 2015, even if I was playing for 3rd place matches, I was making it to the offline event and it was always a great feeling. It felt like a nice reward, getting to experience a big arena and play League of Legends in front of a crowd.

We didn’t have this for three years now because of Covid, but now that we have it, that makes me super happy. This whole time made me realize how lame it is to not have that happy ending that every player enjoys: To play in front of a big crowd.

I am really excited, not only for myself but also that things are going back to normal and that we get to have all these LAN events for everyone to enjoy because League of Legends is a lot more fun in front of a crowd.

Yohan: So, if you do make it to the LEC finals, whom do you want to face and whom do you think will make it there alongside you?

Odoamne: G2 will probably make it as I don’t see how they can lose two bo5’s in a row.

Whom do I want to face? I guess there is a grudge match against G2 because they beat us, or more like they stomped us last spring.  At the same time, I would like to face MAD Lions. I got reverse swept in my first-ever finals and I am looking for my revenge.

Yohan: Is this the year where Rogue Odoamne finally lifts the trophy?

Odoamne: Honestly, I don’t know… It’s hard. G2 is also looking really good. We even saw the last split, in the lower bracket a lot of crazy stuff happened.

In the last split, they were not really title contenders but once they went to the lower bracket, something clicked. I just want to take it one series at a time. I don’t think lifting the trophy is going to change the outcome of any result. We need to scrim and prepare well for the games because, at the end of the day, it’s about preparation.

Pastrytime has retired from casting competitive League of Legends
Lol

How to solve LoLdle’s Classic mode fast and easy: a guide