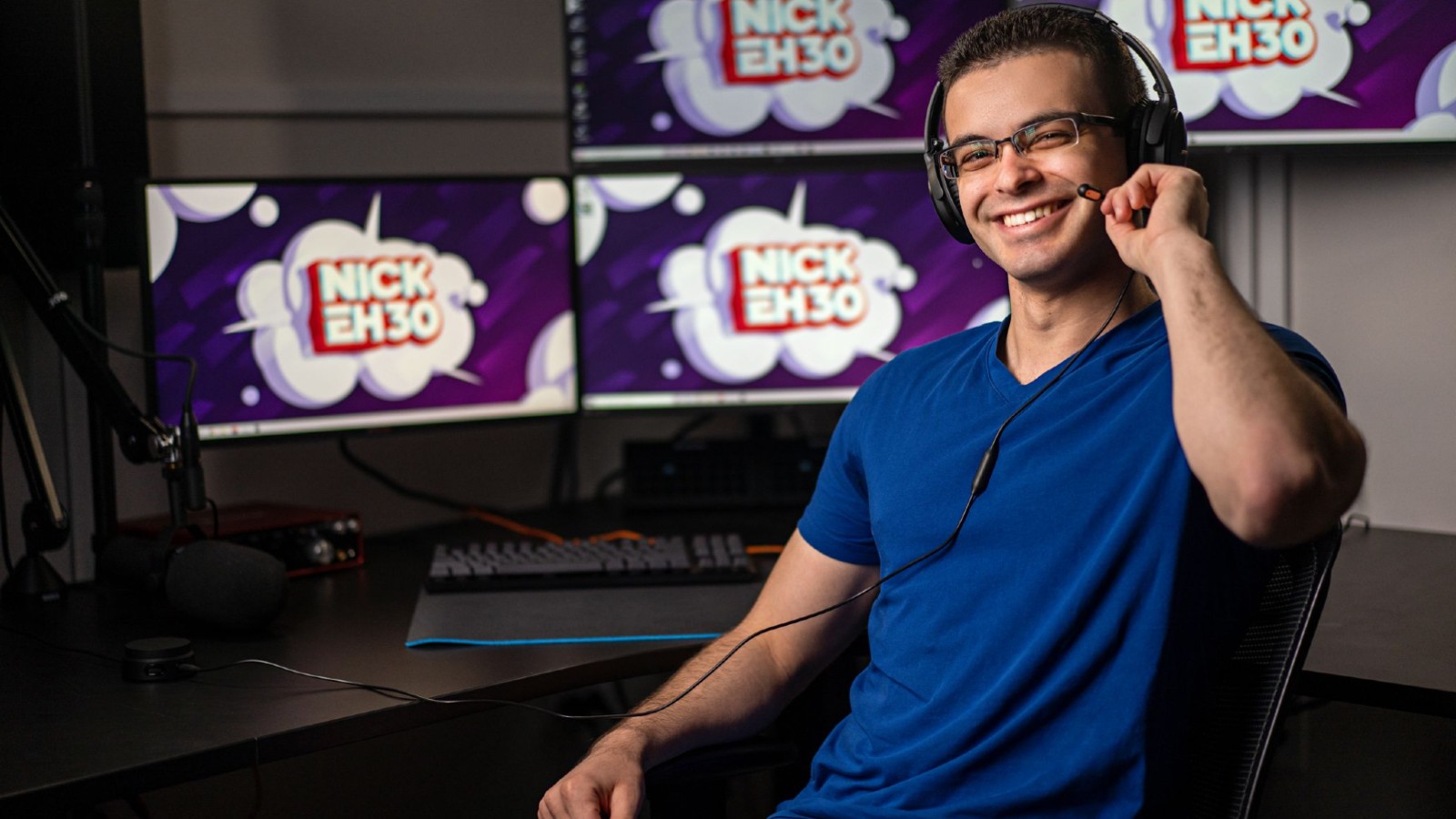 One word comes to mind when most people think of popular streamer Nick Eh 30: positivity.

The Canadian was among the original crop of streamers to pick up Fortnite and ride it to a major career. Now, Nick has over 2.5 million followers of Twitch and 5.6 million subscribers on YouTube.

In an environment that both fosters and rewards toxicity, Nick’s success proves that there’s a void in the market for positivity in streaming and gaming. We sat down to talk with Nick about staying positive, his career, and, of course, the game that helped him catapult himself to streaming fame: Fortnite. 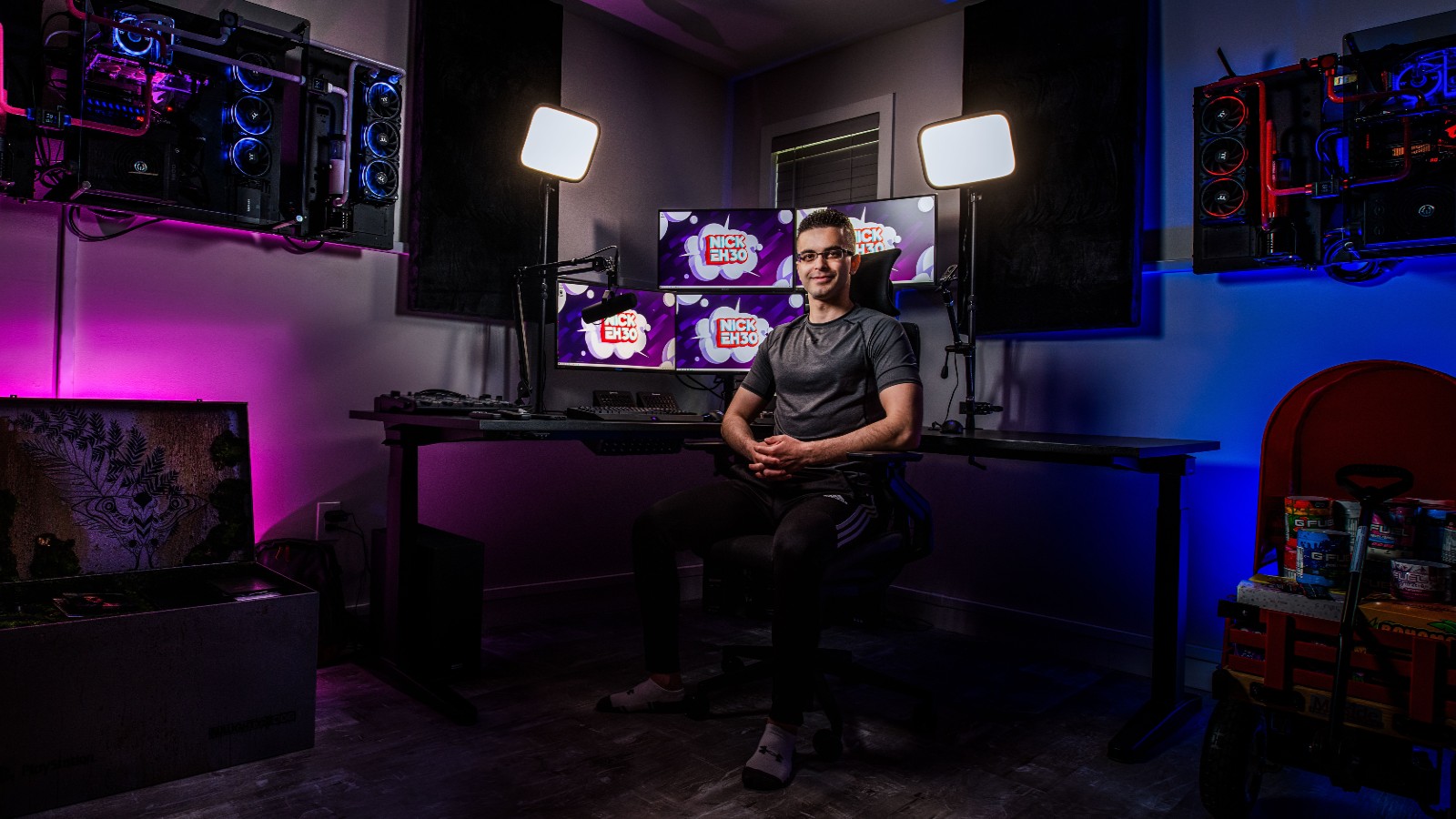 I want to start with a quote from SypherPK: “Going family-friendly in Fortnite as a big streamer – it can make you lose your sanity. And don’t even tell me Nick Eh 30’s pulled it off. I know Nick Eh 30’s losing his sanity. I see it. Every day I see Nick Eh 30 doing a custom where he runs 100 people over with a truck or hulk smashes them. Every day I see that. That’s his way of coping with this BS.” What’s your response to that?

First off, I just wanna start by saying that me and SypherPK are amazing friends. We’ve collaborated a lot lately. I think Sypher was just kind of meming, you know, for the banter. He knows I know he’s not being serious.

I definitely think that there’s a space for positivity in the space. Sure, I’m staying family-friendly, and that limits who I can collaborate with and all that stuff. But I do feel like there are a lot of younger people out there and people who are being influenced by us so I try to set the best example I can.

If anything, being positive helps me become better in life. It makes me excel and want to improve.

For example, when I die in Fortnite, I don’t want to just get angry and yell. I want to try to take that moment and learn from it.

Don’t get me wrong, I do get upset sometimes. But I always try to look at the positive, clip that moment, break it down, watch it back when my stream ends, and just see what I could’ve done 10 seconds before that or a minute before that. There’s always something you can do.

“I give the analogy of: if you’re building a house, it’s on four beams. You want to make sure you’re not just being held up by one beam. It’s not just gaming keeping you going”.

Does the positivity ever burn you out? Obviously, you’re a big streamer. You get stream sniped. Do you ever just want to cuss out a stream sniper?

Heck ya! There are times where I do get frustrated. But I think it’s about balancing your life out.

I give the analogy of: if you’re building a house, it’s on four beams. You want to make sure you’re not just being held up by one beam. It’s not just gaming keeping you going.

I make sure that I have fitness, my community, my family, my friends – I have all of these different support structures that – if something goes wrong with one, that’s not the end-all-be-all. I also think that who I’ve been playing with recently makes me stay super positive.

You mentioned fitness. Do you think physical fitness makes you a better gamer?

Oh, 100% – both physically and mentally. I’ve been going to the gym a lot recently, and even when you’re, for example, doing arms – as you work out your hands get stronger so you’re able to play a lot longer and more consistently.

“I notice that – especially during tournaments – one of the biggest things is that it doesn’t matter how much I practice, I’m always nervous. Always”.

I’ve noticed that it also helps to get the nervous energy out a little bit.

I actually totally forgot to mention that. That’s a really good point.

I notice that – especially during tournaments – one of the biggest things is that it doesn’t matter how much I practice, I’m always nervous. Always. 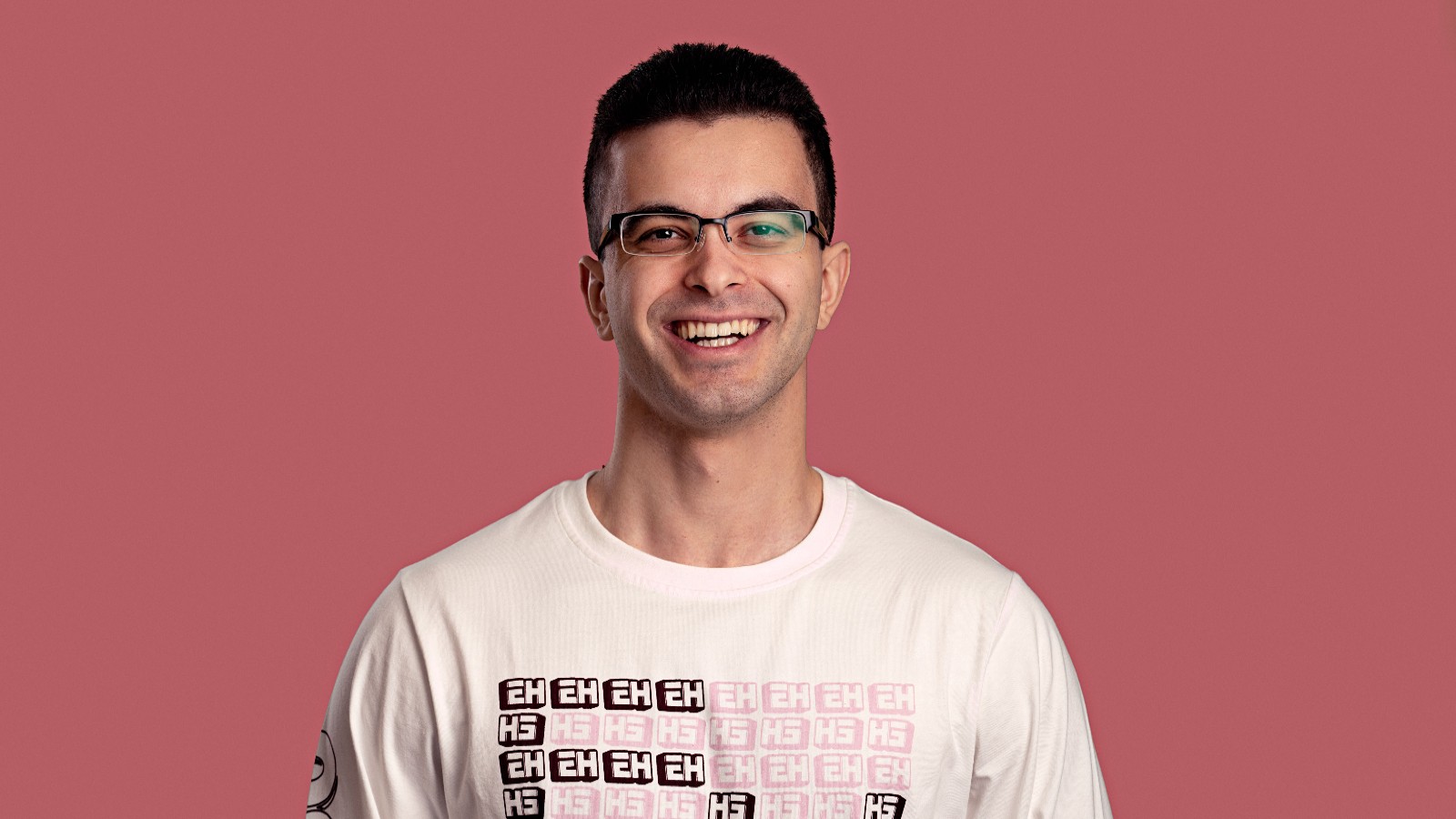 We asked Nick what kept him on Fortnite after all of these years. For him, it’s all about getting better at a game that has one of the highest skill ceilings in the space.

People who haven’t followed Fortnite for that long probably don’t know that you were one of the original editors. At one time, you were the best editor in Fortnite. At what point did you notice that other players were missing this huge element of the game?

I appreciate that. Honestly, I didn’t even go out to search for the “Edit God” title or anything. I was just streaming every day and playing off-stream. I was doing 12-hour streams seven days a week non-stop and I was just excelling because I was playing it so much because I loved it so much.

I’m telling you, just wanting to get better at something is such a motivating factor. And the name just came. I don’t know where it started or anything but I’m just grateful that I have myself cemented in the original beginning of Fortnite history. I’m just thankful for my community for that.

What Fortnite creators are you watching right now when you’re not streaming?

There are a lot of great ones. I like to support my friends. A lot of people I play with – I like to be in their streams.

I’ve been watching SanchoWest, Alixxa, Punisher, FaZe Replays. Also, when it comes down to competitive, I’m always trying to learn. So, I’m watching other top streamers who are super good at competitive like Clix, Bugha – there are a lot of great competitive players.

I try not to just watch for enjoyment. I also watch to learn, so I’m taking notes and clipping things. That way I can put it in my editing software, slow it down, and kind of emulate what they’re doing when they building, when they’re tarping – trying to listen for call-outs, that kind of thing. Seeing how they rotate, why they rotate, when they rotate. Stuff like that.

So you’re really clipping plays and slowing them down in your editing software?

Oh, I literally did a stream a few weeks ago where I saved all of these TikTok clips that I saw of people doing techniques. I went into my software and I’m slowing it down and analyzing what works and what doesn’t.

I’ve actually implemented it into my game. People who have watched my streams, in the beginning, know that I’ve learned a lot of really cool stuff from TikTok and other streams. Heck ya!

I wouldn’t say I have a least favorite season. I have a favorite Fortnite Season, which would probably be (Chapter 1) Season 4. Just because that was the first time that Fortnite had an event.

Ever since then, that’s when all of the events started coming, one after the next. It’s when we started to get a story in Fortnite, and it really started to pick up, which I enjoyed.

I would probably say that the most memorable one was the Marshmello concert.

It was the first of its kind. It had over 10 million concurrent viewers, it broke records, it had great music. I remember vibing-out with SanchoWest. I just love it when I’m reacting with friends. Again, that helps me stay super positive as well – when you’re surrounding yourself with positivity.

That goes back to who I like to watch. I love to watch positive streamers and people who are setting a good example because it reflects. It reflects into your mentality and what you say on-stream.

If someone’s constantly complaining about a game and saying they don’t like this, you’re subconsciously gonna say, ‘You know what? I don’t like that [either].’ But if it’s always positivity, you have that mentality as well.

“I love to watch positive streamers and people who are setting a good example because it reflects. It reflects into your mentality and what you say on-stream".

What are some changes you’d like to see in the next Fortnite season?

I think the biggest thing that’s going to keep Fortnite relevant in the long-term – and I think Epic knows this – is Creative. It allows anyone to jump in and do whatever.

The big change? Go from 16 players in Creative to 100. Then, you don’t need devs making maps for Battle Royale. It’s the community and self-sustaining. 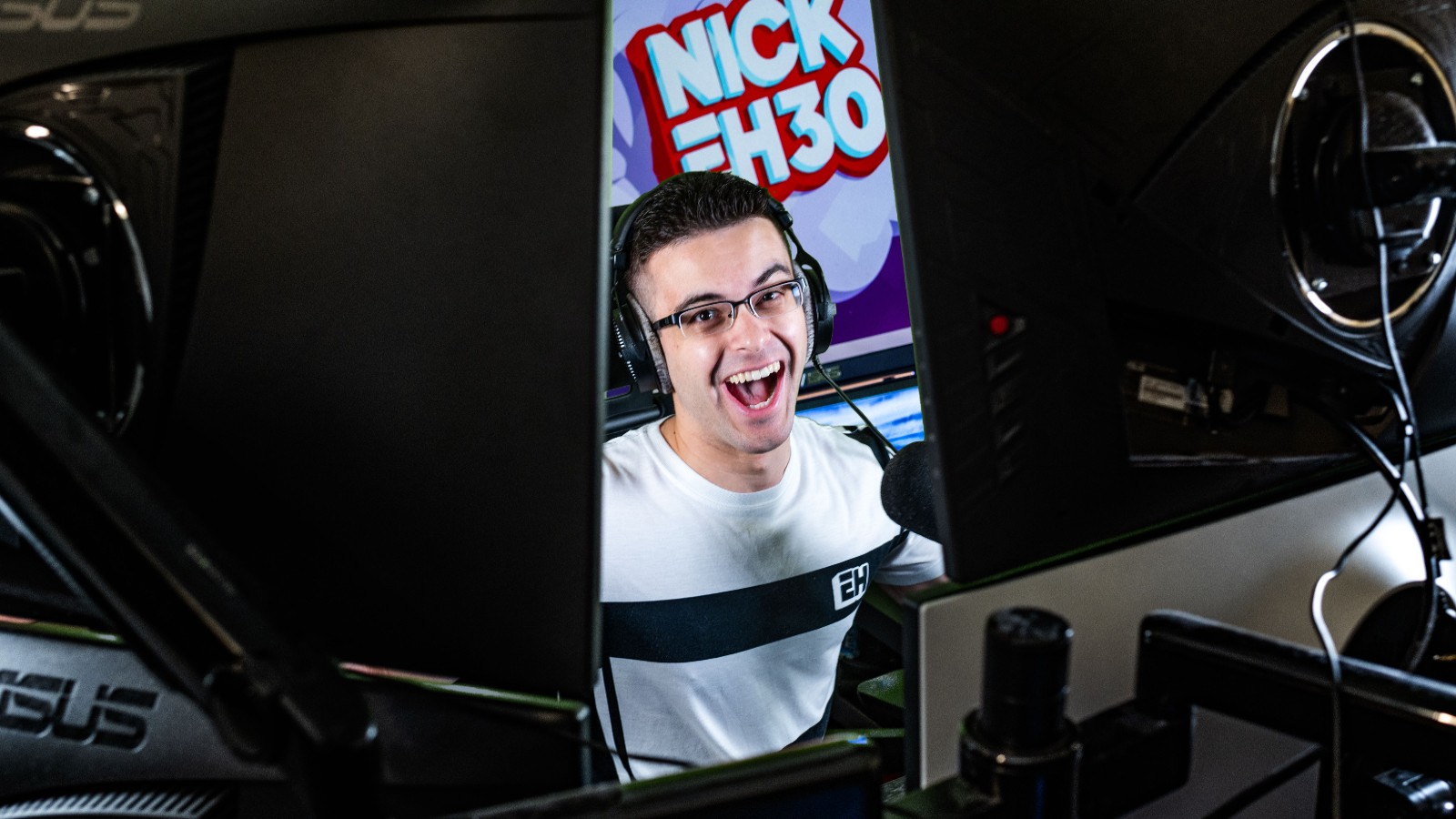 You can catch Nick Eh 30’s Twitch stream nearly every day, along with frequent uploads to his YouTube channel. He’s on Twitter @NickEh30, so follow him there as well. We’re excited to see what’s next for one of Luminosity Gaming’s newest signings. According to Nick, he has some big plans for 2021.