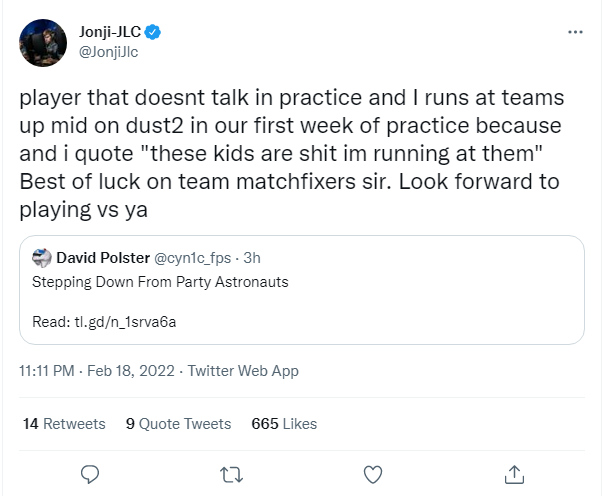 There's just nothing like it. One week before a tournament, and all hell has broken loose. You just don't get this in Europe. Thankfully. I don't think I could take this much drama.

Do you guys still say that, or am I now a boomer from outer space?

cynic has left the Party Astronauts, is the underlying story here. If you'd have told me I was writing something on that yesterday, I'd have turned my helmet off and came back next century.

But thankfully, cynic's 'I'm leaving' post outlined the fact that he was clearly the hardest working and best player on the team. I'm barely even embellishing. He verbatim says "In addition, I have been the hardest worker by a large margin since the day I joined the team, and to see my teammates still doing the bare minimum a few weeks before incredibly important events feels like a huge slap in the face."

EU player leaving team = boring twitlonger, "had some internal problems, still wish the best for the team", no drama

Especially when you have Jonji on your team.

Doesn't get vaccined for 6 months knowing he's going to Europe to play for pro league, fucks an entire team of 5 guys, says he wants to make something in CS. I hate fake humans, always have always will say it how it is. Freak of nature

There's barely even anything for me to comment on here. This is absolutely hysterical. A few days before this Jonji was defending him for not being vaccinated, and now he's straight up throwing him under the bus for it.

cynic f'd around and got found out, it seems. He's been deleting some tweets in return, which is the move of someone who's losing the argument.

Yeah, Jonji's hours in the last two weeks aren't all that high, but I can't really blame him too much for not wanting to play in NA when there was an EU bootcamp on the cards. Alright, I CAN, but it's much funnier for the drama if we assume Jonji is right.

Seems like the coach wasn't all that happy either.

With 5 days left until EPL roster lock cyn1c has suddenly informed us that he is joining a new team.

We are now looking for a new player to replace him.

There's literally no game these guys can play that will have me more glued to my screen than waiting for Jonji's next tweets did, and no conclusion of a game will make me feel more empty than seeing him apologise and say he wasn't coming back for drama.

For someone who doesn't want to be involved in drama, Jonji seems to find a whole lot of it. And he's really, really good at it.

Forget IEM Katowice, I want to see more Party Astronauts pile in and add to the discussion. Let's get another player saying they're both complete idiots or something. I want to know about how Jonji chews with his mouth open and it ruins practice or something. Make it as dumb and as loud as possible.

We don't get this in Europe, and we really need NA to provide it. It's not like you guys are providing much else at the moment.