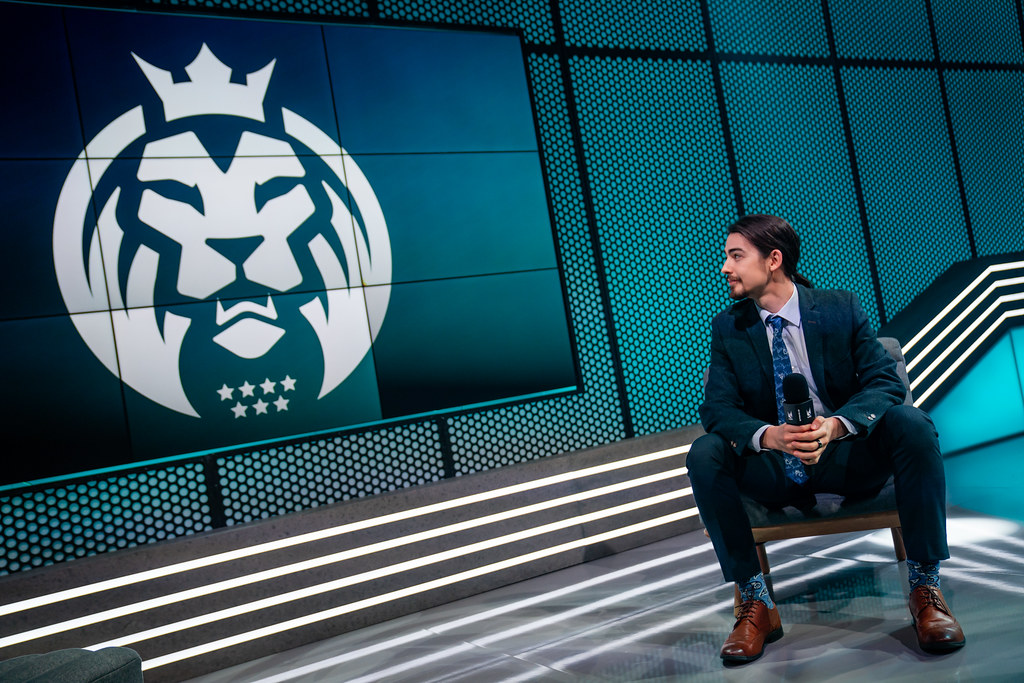 Talking points during the Interview:

MAD Lions made a complete turnaround in the LEC 2022 Summer split. From a struggling team that failed to reach the playoffs in the spring split, the organization established themselves as one of the favorites for the top places. Considering their successful 2021 year, their resurgence was due.

With the addition of Nisqy, MAD Lions became more proactive on the map and the void of leadership seems to be fulfilled. Currently second in the standings, the team is building consistency, and their winning mentality became a factor in their success.

Following the opening win from Week 4 of the LEC against Team BDS, MAD Lions’ coach James “Mac” MacCormack joined Jaxon for an interview.

Yohan: Congratulations on the win! A bit one-sided, but what are your thoughts on the game?

Mac: I think we had a good showing. We managed to do the things that we practice all weekend on scrims, so I am really happy. We had a challenging week of scrims I would say.

Obviously, we are looking much better this split, so we have been playing really good teams, and we have been pushed a lot more on a bunch of things like meta, draft, laning phase, teamfighting etc.

This week was harder for us in scrims, but a lot of the stuff that we have been talking in the recent weeks like: The way that we are playing the mid-game, the way we are accelerating our leads and the way how we are setting for objectives has been pretty good today(vs. Team BDS). I think that’s a big takeaway for us, which is really positive.

Yohan: I would like to go into the topic of the recent two-week break. I know you are a big fan of preventing burnouts in esports, was this break good for you? Do you think it made you lose some of the momentum or do you think it was good for this break to occur?

Mac: I think it’s a good thing, for the industry in general. Whether it’s good for us, specifically, is another question. We always put a lot of emphasis on wellness and mental well-being.

I would say that we are in a phase where everyone feels motivated to play more and we found something that benefits this team more than the team from last year. So, we are adapting a little bit in that sense.

We did take a few days off and we wanted to make sure that players had the ability to go home and spend time with family. But actually, all the players wanted to carry on grinding, so that’s something that we were very happy to hear.

I think it’s really good to have a break. For us, I think it was great to have some more time to practice and figure out the meta a bit more and test things, but it wasn’t a huge break for us.

Yohan: And what about you personally? Are you more of a fan of the 8-week straight competition or you would like to see more of those breaks being implemented? Let’s say we would have the LEC being played every two weeks? What do you think about this idea?

Mac: Each two weeks? Wow, this would make for a long season. I think if that’s a tradeoff for having bo3’s, then I would be really happy with this. I think bo3’s lead to a higher caliber of League of Legends.

I don’t know how the system could possibly work, since you still have to do the double-round robin at the end. But if there was a way of introducing more series and having more breaks, I would be super in favor of that. (laughs)

I think it might be quite difficult to do logistically. That would be something that I would be interested to hear. So yeah, if we are still doing bo1’s then I think it’s difficult, because while it’s good to have every so often (each 3-4 weeks), it’s often easy to lose your momentum and you don’t have anything to test yourself against.

Yohan: We are seeing a different MAD Lions compared to Spring split. We are in the middle of the split, and we can safely consider MAD as one of the favorites for the top places. Can you tell me what are the factors for this big change from Spring to Summer, how can a single player make such a big difference? Without talking badly of Reeker.

Mac: I think you have a point. One player can change a huge amount and I think you are also right about not speaking badly of Reeker. I think he is a good player and has the potential to develop it into a much better player.

The thing is, he just didn’t gel that well with the team and there are two areas that are really important, and that Nisqy gives a lot in.

One is obviously socially. Nisqy is such a fun-loving person that brings a lot of joy around him. He also had good pre-existing relationships with a lot of our players, so that was a very easy transition for him coming into the team.

Also, he is proactive. He is the type of person that will get other people up and say: Cmon, let’s go play sports together, or let’s go out to the restaurant together, or hey, we have a problem, let’s talk about this.

The other one is in-game, he is much more experienced than Reeker and that’s a big advantage that he has over him. He has a really defined style as a player. He knows exactly how he wants to play the game; he knows what his strengths are and he knows how to commit. He has a very clear philosophy and that gives the team some direction.

Something that we really lacked last split, and this is not Reeker’s fault at all. It just happened to be the connection of individuals that we had. In the really clutch and decisive moments in teamfights, we often lacked a unified voice.

Someone that would say: Go in now. It doesn’t matter, everyone flash on this guy or everyone run, it’s a bad fight. We were just a bit too slow to make those decisions in the moment and Nisqy brings that a lot.

Yohan: What about the meta changes? We’ve seen a lot champions rise in priority. Do you actually think the meta can change a lot for the upcoming weeks in the LEC?

Mac: Yeah, I think so. People will still take a little while to figure out even the aftershocks from the durability update. When you first come into a patch, often players and coaches tend to look at what looks good in lane.

So, you end up with a really heavy bias towards one thing. Like laning phase. Later on, the meta evolves a little bit and you realize that actually, there is another champion that could be weaker in lane, but can be really good into the meta AD carries, for example.

That process, from the durability update, I think is still ongoing, and I think there have been a lot of pretty big patches. Obviously, the durability patch brought enormous changes to the whole system of the game.

I think there is that, and then I also think that there are just a lot of big updates and big changes recently, which happens.

Yohan: What is your opinion of the new champion Nilah? She seems like a 200 years type of a champion.

Mac: It does look a little bit that way, to be honest. I don’t focus too much on the new champions until I actually have to play them. So come the first scrim day, where we have Nilah enabled, I will sit down and watch a lot of vods of her.

I imagine that she will look really broken. Then again, you never know how well something is going to transition from solo queue to competitive. When I first saw Bel’Veth, I thought: This champion looks scary. She is terrifying in solo queue, and there a lot of disgusting montages.

But there have been very few teams that have taken her out into competitive. There is always that, hopefully Nilah isn’t too insane in competitive but there is a general trend towards power creep in League, because the new champions have to do stuff that the old champions can’t.

I think the people who are designing the champions have a pretty tough job and they have to get really creative with what they can do. Sometimes you end up with game-changing kits. For example, if you play against Evelynn, it changes the way that you play the game, because your wards don’t work in the same way.

I think that’s a natural progression for League of Legends and the champions that come out. They have to be creative with the designs.

Yohan: The LDL (2nd Chinese league) have introduced a new format, where you wouldn’t be able to pick champions more than once in a series. What is your opinion on this format? Do you see it being successful and maybe even being implemented in the bigger leagues?

It will test players in a way that they have never been tested before. And you can argue that that’s a good thing, because it forces players to be adaptable, but you can also argue that it’s a bad thing.

I think League of Legends requires a huge degree of adaptability anyway, but the patch update is every two weeks, right? We play a new patch and recently they have been quite big and there have been a lot of changes. The patches are becoming more and more impactful, whereas in 2020 we had smaller patches, with fewer champion changes, generally speaking.

But, already because of that, I think players have enormous burden of adaptation on them. If you are a player, you need to be able to play at least 5-6 champions to a level that you are happy playing them on stage, which takes time.

Having even fewer options and even more burden to actually have more pocket picks is really tough with such a short patch cycle.

It will challenge players in a really different way. I don’t know if it’s a good way or not. I think there is an argument that it can contribute to burnout, because players will literally have to practice like 10 different champions, in order to have a champion pool that can effectively leverage to counter pick properly in situation like this.

In a world where this becomes the main system, you will have to select players that are naturally versatile. If it’s adopted, it will change the League competitive eco system enormously.