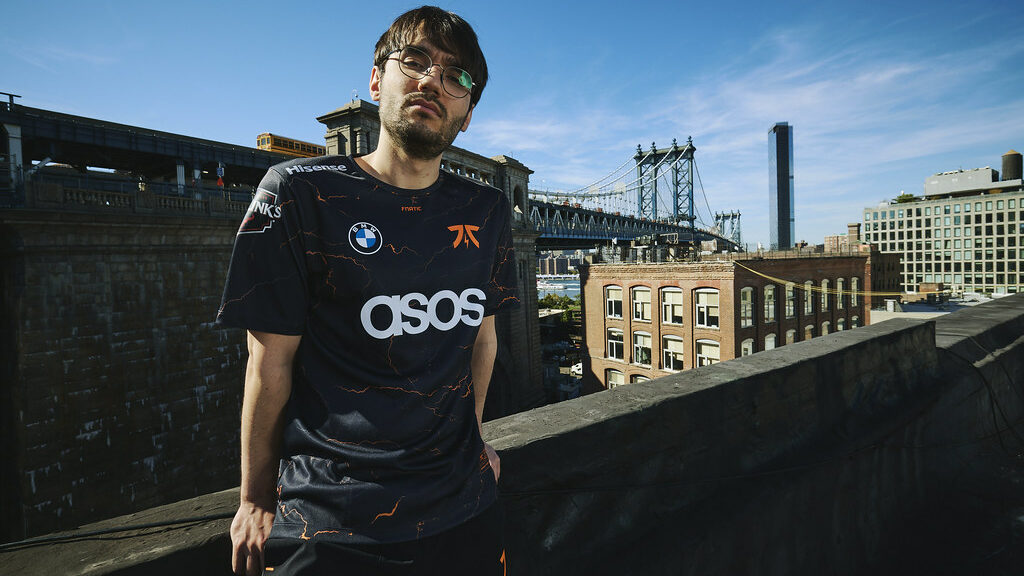 After spending nearly five years on Fnatic, a new challenge arises for Bulgarian support Zdravets “Hylissang” Iliev Galabov. Following a tough Worlds 2022 campaign, Fnatic has reportedly made changes to its roster, tackling the 2023 season without Hylissang and Elias “Upset” Lipp in tow.

Fortunately, the storied Bulgarian support found a new home in the LEC, MAD Lions. The trend points toward a long stay as this will be Hylissang’s third team of his soon-to-be 10-year career. Having stayed nearly four years on the Unicorns of Love and five on Fnatic, we might be in for a long journey.

In an exclusive interview, Jaxon had the opportunity to speak with Hylissang regarding his new adventure, the offseason, Worlds 2022, the new LEC format, and his future goals.

A new career chapter begins for Hylissang on MAD Lions

Jaxon: Congratulations on signing with MAD Lions, and welcome back to the LEC. Tell me, how does it feel to be on a different team after almost five years on Fnatic?

Hylissang: First of all, I am extremely grateful to MAD Lions for giving me the opportunity to play for a team like theirs, since I didn’t have many options. The options that I had were from bottom-tier teams, but then, MAD Lions approached me and I was extremely excited and happy to see that.

I didn’t expect that I [would] have to leave Fnatic, but it did happen and again, I am extremely grateful for the opportunity that MAD Lions are giving me. I feel like we have a very strong roster and a good team. I’m very happy with the players that are in there, and I’m looking forward to seeing what we can do together.

I am grateful for the time I’ve spent with Fnatic and all the things that they have done for me.

Jaxon: It’s also your only third team in your career. Based on your previous experience, you usually commit for a long time with your teams: almost five years on Fnatic and close to four years on UoL. Do you see yourself staying on MAD Lions for a long time as well?

Hylissang: For sure. I am a player [who] likes to improve in his current team. I don’t like change in general; I like to be loyal to the people that are around me and work with them for as long as possible. As long as MAD Lions want me, I definitely see myself on the team, I guess (laughs).

Jaxon: What actually made you sign with MAD Lions? You mentioned that you had different offers but mostly from bottom-tier teams. I assume, you still had some options left. So, why MAD Lions?

Hylissang: It was pretty easy to go with them since, I think, the pieces in the roster are great, and they will fit together. Also, there are a lot of good individuals. For me, it was an easy decision. The offer that they gave me was also pretty decent, so I was very happy to say “yes” to them.

Jaxon: You will be playing with some new faces now and especially on bot lane, with Carzzy. Both of you are notorious for your aggression and people do think that you will be fun to watch. How do you envision this bot lane partnership?

Hylissang: Carzzy has always been a guy [who] I liked playing against, and I imagined myself playing alongside him as well. I feel like he is the type of player that I would enjoy playing with, and I believe it will be quite fun indeed—playing together in the bottom lane. I can’t wait to start practicing with him and start improving.

We will match very well as personalities; I am sure of this. Because of that, we will also empower each other’s abilities in-game as well. Even though people think that we won’t be a good duo on paper, I think we will match. I am sure we will be great.

Jaxon: Would you say you are the same person but in different roles? Gameplay-wise, of course.

Hylissang: I think he is crazier than me (laughs). I would say that we are very similar, but he is wilder.

On the LEC format changes heading into 2023

Jaxon: Talking about the LEC, a new format was introduced recently which will feature three splits. What were your initial thoughts on that when you first heard about the changes?

Hylissang: Whenever it comes to format and change, I trust that the people behind gave a lot of thought to it. I will follow and try to do my best in whatever format I am playing. I don’t mind what it is.

Jaxon: And do you think the level of play will increase with the new format, especially with the bo3 being introduced?

Hylissang: Really hope so and I believe it will since there will be more accurate matches and more practice on stage as well. Scrims are not that efficient in Europe I would say. Surely, it will bring more quality games, or at least, I hope so.

Jaxon: What about the schedule? Do you think it will affect burnout in the long term?

Hylissang: It’s hard for me to say. I am not sure. I don’t think it will be that heavy on players but maybe toward Worlds, it might cause some effect for sure. However, I think during the split, players are more than capable of being fine, unless they are having very bad daily schedules.

Hylissang: Honestly, I didn’t get to play the game that much. I played a bit—no more than 10 games—so I am not very familiar with all the changes that are being introduced.

When I played [LoL], it didn’t seem that different. There are some jungle changes where every champion can full-clear, which felt a bit too much to me. Also, they removed counter-jungling a bit, so I am not sure about these changes. Maybe [they] will make it more noob-friendly.

What went wrong at Worlds 2022 for Fnatic?

Jaxon: I would like to talk a bit about Worlds 2022. It was obviously a tough tournament for you and Fnatic. Can you tell me what actually went wrong there? Judging by the first week of Groups, you were on a very good trajectory, European fans believed Fnatic would get out of the group, and you almost even went 3-0. Week 2, things fell apart, what happened there?

Hylissang: When it comes to Worlds and Fnatic, honestly, I think it was very unprepared. When I say unprepared, I mean not prepared at all. When I came to play, they also had Rhuckz as a substitute. The team was performing with a support that didn’t have a single game together with the team.

But we didn’t prepare any strategy or any draft or anything at all. Everything was just: “pick me that champion and I hope we do [well].”

The comms were not as good since almost everyone was sick. Having coughs, it was difficult to communicate. For example, I wasn’t practicing much as I was sick, and I was trying to recover. I was also flying one day before I played, and I didn’t have any solo queue preparation. It was very unprepared and very hard to play versus good teams.

During the Play-ins, we could play and do decently against the other teams. But when it comes to good teams, we tried to play the things that we would play during the LEC playoffs. We tried something that has worked in the past. It was quite hard against the new strategies that the better teams have practiced in scrims.

Hylissang: No, we didn’t have any practice. We played maybe 1-2 scrims, and they were with Razork being barely able to play jungle because his PC had a very low FPS [rate]. The most practice I’ve got during Worlds was from playing 2v2 with Upset versus other bot laners. Everything else was just solo queue that was not very productive and then stage games.

Jaxon: So, this also happened even Before the Group stage? You would say that you played 1-2 scrimms throughout the entirety of Worlds?

Hylissang: Yes. Throughout Worlds, we had maybe 5 scrims in total.

Hylissang: Yes, it was very hard to be confident on stage when you don’t play as a team, you know.

Jaxon: Based on those facts, you did a very good job. You won your Play-in group and made the big teams sweat. Of course, you wanted to qualify for the quarter-finals, but would you say it’s basically the most you could have gotten out of the situation?

Hylissang: If we got out of groups, it would [have been] the most we could have gotten out of [Worlds 2022]. Also, I think that the group we were in was not easy to advance from. And with the amount of practice we got, I think it was quite a miracle that we got that many wins.

Jaxon: I don’t want to go much deeper into this but, you are now out of Fnatic. Would you blame it more on Fnatic or more on the outside factors that happened to the team before and during Worlds?

Hylissang: Everything added up to Fnatic making the change that they did. It was also the community, the whole flying and playing on the next day situation. A lot of factors didn’t go as they should have gone.

Scrims not being productive, and not being able to play at all, makes it as Fnatic needs a change. They decided to change the bot lane rather than fix anything else. Change had to be done—I’ve been told so—and they decided that it had to be me and Elias. I am not sure why, but yeah.

Jaxon: After you were knocked out of Worlds, did you anticipate that there would be a roster change that would include you?

Hylissang: You can always anticipate, but I never thought that I would be replaced, especially with Elias (Upset). We have been doing very well throughout the years on Fnatic, but a change had to be done. I didn’t anticipate it at all, but I probably should have.

I always believed that what the team sees and thinks [is the] most important. But it comes to: what the fans and other people say matters a lot to the team organization and [to] the team members that are making the decisions. It makes you think a bit more about how you look outside the game rather than what your teammates think.

Jaxon: Still, it’s a new chapter and a new opportunity for you. New beginnings are always nice.

Hylissang: I’m extremely happy where I am, honestly. I’m very grateful to MAD Lions and I hope we can do well. This seems like an organization that will fit me and I really hope that we do [well] so we can keep playing together, stay as a group, and enjoy our time.

I feel like this is the key that has been missing for a while in my previous teams. It’s just enjoying what you are doing together and having fun.

Jaxon: To finish off, what’s the next goal of Hylissang in his career and what should we expect from him in 2023?

Hylissang: My goal, right now, is to win as many games as I can for MAD Lions, and make sure that they made the right decision by picking me up. I want to make them proud, and I really hope that we can win Europe and make it far as a team.