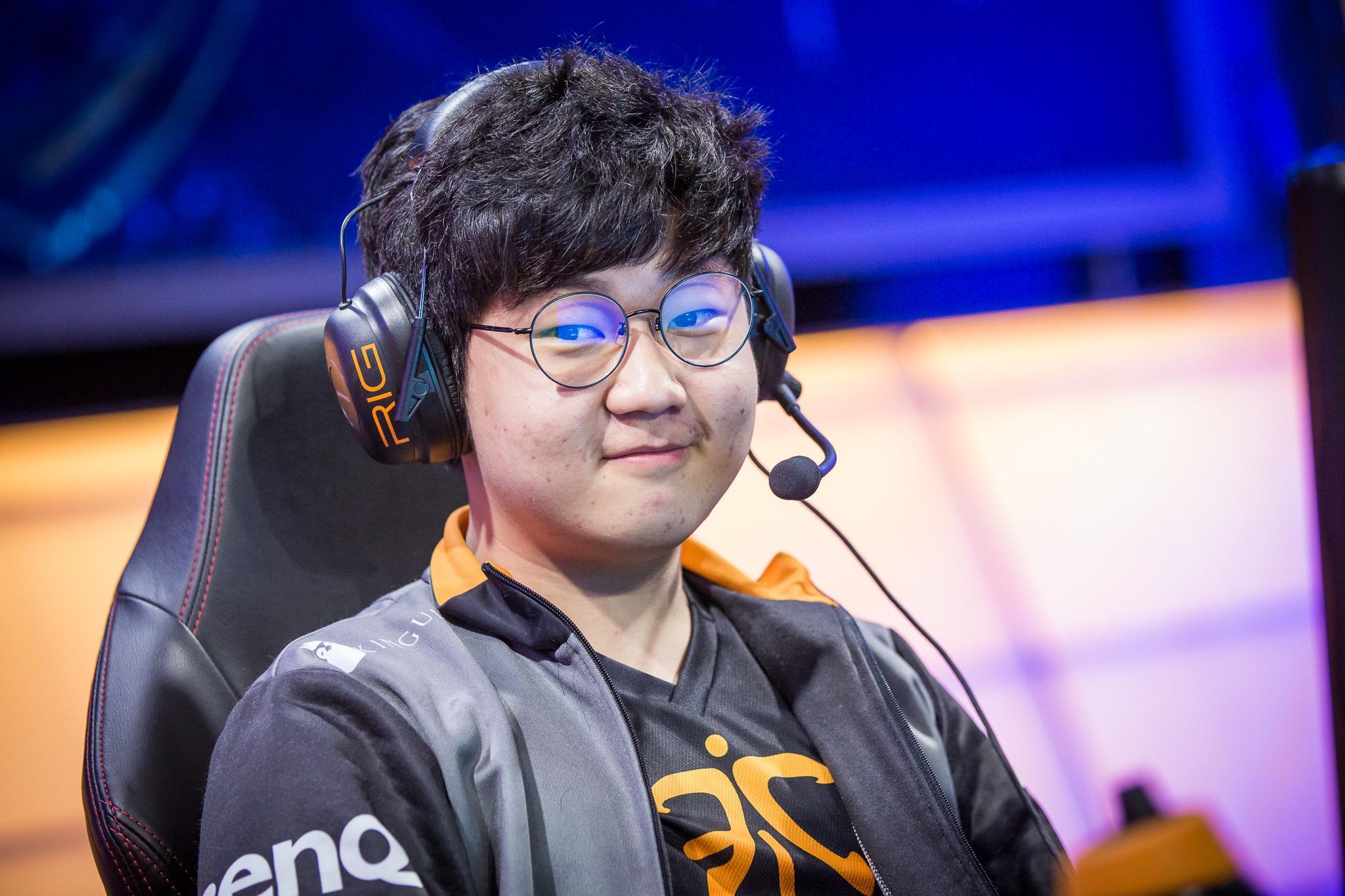 Huni already stepped down from his position as a starting top laner for TSM owing to injury issues with his wrist. Eventually, as he struggled to deal with his recurring injury, he called it a career.

In seven and a half years, the 24-year-old top laner won two EU LCS titles, including the perfect 18-0 split with Fnatic. He is also an LCK Champion, World Championship finalist, and a Mid Season Invitational Champion.

Crazy story of Huni joining Fnatic to kick off his career

In 2014, then-16 year old, Huni was a player on Samsung’s development team. In a crazy turn of events, he met Fnatic’s manager at the time, Oliver “Izpah” Steer, as the latter was visiting Korean gaming houses before 2014 Worlds in South Korea.

While waiting for Samsung’s coach, Huni and Steer had a 20-minute chat translated by Steer’s friend. A cocky Huni thought Fnatic would perform poorly at Worlds, then managed to arrange a scrim match versus Fnatic.

Huni gathered a team of young solo queue players, including Dignitas’ Noh “Gamsu” Yeong-jin, and they stomped Fnatic four games in a row, all within 20 minutes. Steer couldn’t believe his eyes, as Huni dominated their top laner Paul “sOAZ” Boyer.

Fast forward a couple of months, and Fnatic’s collapse at Worlds led to the legendary roster falling apart. Thanks to Steer and the only remaining player and team captain, Bora “YellOwStaR” Kim, Huni eventually received an offer from Fnatic.

From random to superstar

Huni led the new Fnatic roster full of young, unproven talent to glorious heights in 2015. After they won the Spring split, Martin “Rekkles” Larsson returned to the roster after his failed adventure with Elements.

From there, Fnatic completed a first-ever perfect 18-0 split in LoL esports history and crowned it with a back-to-back EU LCS title. The team reached the 2015 Worlds semifinals, with Huni shining as one of the team’s top performers throughout the tournament.

From a random training solo queue player in Samsung, Huni became a world class superstar in such a short time frame of less than a year.

In addition to his amazing and exciting performances on the Rift, Huni quickly became a fan favorite. His hilarious, positive, and turbo-energetic personality brought thousands of fans to closely follow him and his team.

Despite being just 17 and speaking broken English, Huni didn’t shy away from engaging with fans and giving interviews.

Fnatic’s voice comms and behind the scenes video were viral at the time, as watching Huni was pure entertainment for the fans. Clips such as “Holo Holo” became a staple of his brand and followed him till the end of his career.

Huni was very confident and quite cocky, but he proved it on the Rift more often than not. Huni cherished a unique playstyle that revolved around aggression and dominating the opponent.

Although very resource-heavy, Huni was at his best when playing aggressive and lane dominant Champions. He always wanted to carry, and his teams happily gave him all he needed. Sometimes though, he tried to carry a bit too much, which would often end pretty badly.

Huni pushed the boundaries of playing top lane in the West. He was a true carry top laner, featuring signature picks Lucian, Rumble, and Cassiopeia. Although he could play the odd Ornn and Gnar game as we witnessed in his time in SKT T1, he was most comfortable on ultra-aggressive and often off-meta picks.

After a very successful year in Fnatic, Huni decided it was time to move on. Alongside his jungler Kim “Reignover” Yeu-jin, he joined NA’s new organization, Immortals. After a perfect season in Fnatic, he almost got two more, as Immortals finished the 2016 NA LCS Summer split with 17-1 and Summer split with a 16-2 record.

Although having extraordinary regular seasons, Immortals failed to replicate the dominance in playoffs. They even failed to make Worlds, losing to Cloud 9 in the Regional final.

Time for Huni to return home

After a disappointing end to the 2016 season, Huni finally got the chance to fulfill his dream and play in the LCK. The reigning World champions, SK Telecom T1 were looking for a new top laner for the 2017 season. They decided to call up Huni, which surprised a lot of people.

We saw a completely different Huni in Korea. Once a goofy kid became much more serious in SKT. He understood the challenge and put all his focus on winning LCK and Worlds and making his dreams come true.

His maturity also showed on the Rift, as Huni accepted the fact that he is not the primary carry anymore. Alongside his signature Rumble, Huni played a lot of Maokai and tank Galio in 2017. He did his best to put his team in front of himself, not always on his back.

SKT T1 won the LCK Spring season and the Mid Season Invitational that year but fell short in the Summer final and Worlds final. So close but yet so far for Huni, as he decided to go back to NA after a year at home.

Only trophies Huni is missing are Worlds and NA LCS

Huni would go on and play in North America for four and a half more years before retiring. However, it remains the only mountain he couldn’t climb besides Worlds. He played in Echo Fox, Clutch Gaming, Dignitas, Evil Geniuses, and eventually TSM.

Despite not being nearly as successful, he did manage to go to the World Championship one more time in 2019 with Clutch. He also earned a lot of money. Like, A LOT of money. His brand was much more than just playing the game, and he earned big contracts despite not being in top form and being his own agent.

People still loved to watch Huni play simply because he was exciting. He pushed the boundaries and always tried to outplay the opponent. He popularized crazy picks such as Lucian top and played his own game no matter the meta. Huni always had his “carry pants” on, regardless of the matchup and what champion he was playing.

Although Huni’s performances weren’t world-class in recent years, partially due to his injury, he is a legend of the game. Maybe his lows were sometimes rough, but he was one of the best in the business at his peaks.

Huni’s legacy is undoubtedly “Hall of Fame worthy,” as his unique personality and playstyle on the Rift will always be remembered. It is still unknown if he will remain in esports in other ways, such as coaching. Whatever he decides to do, we wish him goodbye and best of luck! Holo Holo!