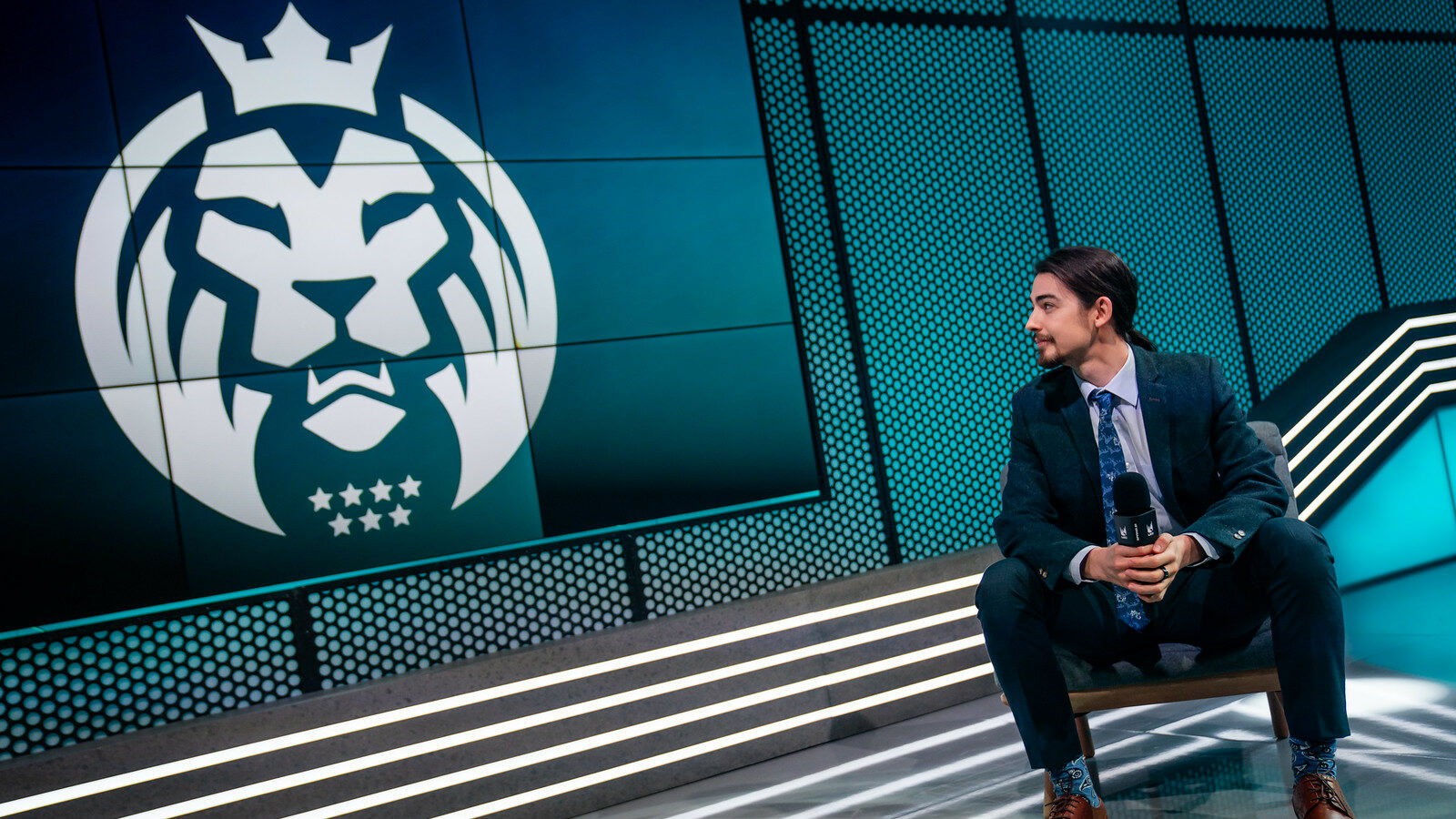 Jaxon interviews Mac: This went wrong for Mad Lions in 2022

By finishing second in the 2022 LEC summer split, MAD Lions and their head coach, James “Mac” MacCormack, have earned their spot back into the playoffs and secured their place at the 2022 League of Legends World Championship.

After a disastrous spring split, MAD Lions made a roster change by adding Yasin “Nisqy” Dinçer to the mid lane, hoping to bounce back. Despite a stellar regular split, MAD Lions failed to meet expectations during the 2022 LEC summer playoffs and were knocked out without a single Bo5 win. However, they still qualified for Worlds 2022 due to Championship points.

Qualifying as the 4th seed from Europe, MAD Lions will start their Worlds journey from the Play-in stage, where they will meet RNG and DRX in their group. A little over a week before the competition, MAD Lions’ head coach, Mac, joined Jaxon for an interview to give an overview of the whole year for the organization.

Yohan: Let’s first start with an overview of the year. What would you say went right and wrong for the MAD Lions this year?

Mac: Oh, good question. Our spring split was obviously a big disappointment. There were many causes of that. I don’t necessarily have so many regrets about putting the roster together that we did. I think it was a good shot in the sense that Reeker is not a similar player to Nisqy in terms of the niche they filled within the team.

It just happens to be the case that Nisqy fit much better with us in terms of what we needed communication and shot calling wise, general personality wise, and also experience.

So, I wouldn’t say that that was a huge failure. We were only one game off of qualifying for playoffs in spring. There were some close ones that we definitely should have won. I’d say the execution of spring is more what I regret rather than the actual putting of the roster together.

It was a big learning for me, and I regret that we had to bench a rookie player between spring and summer. We felt we wouldn’t have a strong chance at Worlds. That’s a huge regret for me: it’s something that I’ve never had to do before.

We’ve never made a roster change in the middle of a year. It’s something that I don’t want to have to do again. You can’t review our year, at least for me, without mentioning that.

For summer, I think that we made a pretty good comeback. Adding Nisqy helped us a lot, and I think we changed the way we did things internally in terms of what we put value on.

We valued team cohesion and ensuring that people were happy, having fun, and spending time together outside of the game during summer. We worked extremely hard in summer.

I think that all of the coaching staff here should be proud. I would say this is one of the most consistent and best levels we’ve had in terms of what we are bringing to the table all around, and I am really happy with that.

My role in MAD Lions has been quite different this year as well: I’m much more overseeing all of the individual coaches rather than being in the trenches so much. I’m spending a lot of time doing people management, which has been quite a nice journey for me. It’s always nice to pick up new skills and work on things that you haven’t worked on before.

So, I think that element of the year has been a success as well, and I think that those changes; how we dealt with the team, how we coached the team, and the overall atmosphere within the team, those things resulted in us having the best regular season finish that we’ve had for a long time.

Finishing second was pretty good, right? That’s the thing that allowed us to qualify for Worlds. Whether or not that was fair, it was the thing that ended up making the difference.

There’s no reason to say that Excel didn’t deserve to go to Worlds just as much as us, barring the fact that we had much better regular season performances and were much more consistent. That’s something that all of us were conscious of coming into the summer split, because we were aware that we didn’t have any Championship points. So, the regular season was really important in a way that it has never been for us.

Our scouting had to be perfect, our level ones had to be as good as possible. That’s something that I think we executed really well. The playoffs were a big disappointment (laughs).

Yohan: Speaking of the summer split, do you think there was a drop in performance due to the fact of you securing Worlds early on? It was still unknown, but everyone anticipated that G2 would defeat Misfits and both Rogue and MAD Lions would qualify.

Mac: There were a lot of different factors. I can’t so much speak for the players. I think that it’s hard to compare our round one and round two matches because I think Fnatic was a much harder opponent for us specifically.

They were in better shape when they played against us than Rogue was. I actually think Rogue improved a lot and were pretty different in each round of the playoffs. Fnatic brought good form and prepared well for us specifically.

So, that’s difficult to compare. Personally, I will say that my observation for the team is that losing to Rogue actually made us more motivated. We knew that we underperformed that day and our practice in the week and after the rogue series was really strong.

We actually committed really hard and put in a lot of energy. I personally put so much energy into the Rogue series, because I knew that the likelihood was that we would play Fnatic and I felt that Fnatic would be a stronger opponent.

That, combined with the fact that we’d had such a high-intensity regular season, I think meant that I struggled to bring the same amount of energy to the Fnatic series. I kind of dropped off in terms of preparation and intensity of picking up new stuff.

The Rogue series was in the first week of the patch, and so I put like an enormous amount of energy into figuring out the patch and learning how to draft certain duos together, learning what our optimal conditions for them are, learning how these champions work, how they’re being played in the LPL, stuff like that.

Then week two was a bit more about refining. I think we improved more before the first series than we did before the second, but I also think that we had figured out the meta a bit more by the end of the first series. Um, I think that the drop in performance was also a lot down to draft. I mishandled some of the drafts in the Fnatic’s series, and I think they read us well. So yeah, there were a lot of factors.

Yohan: You coached a lot of different rosters in your career. What does make this one different compared to the others?

Mac: If I compare it to last year, it’s like opposite ends of the spectrum in terms of what the players need from practice.

Last year’s players needed a lot of freedom, ability to adapt, have fun, and do wacky stuff. Last year we worked a lot on fundamentals rather than specifics. Whereas this year, I think this roster benefits a lot more from a different practice style, which is much more focused, much more specific, and with much more repetition because I think we have a more set identity than last year’s roster.

It’s really different in terms of how we want to practice, even how much we practice. Last year we had a lot of individuals who needed regular breaks, and our coaching staff was also early on in their careers. So, for us coaches, we have also learned to improve managing stress levels as we go on and managing stress levels, not just in us, but also in the players.

So last year, we took more breaks and had periods of lower intensity during the season, also because we attended MSI, which adds a big layer of burnout stress. Whereas this year it’s been very different because we took a big break in spring, so our intensity was kept very high and our repetitions were kept very high throughout the whole summer.

Yohan: Which player’s improvement from your team would you say you were most happy with? Who are you most impressed with in your roster, if there is one above the rest?

That’s really hard.  I would like to mention Armut, because I think he got so little credit for our success this split compared to everyone else. I was personally quite surprised that Unforgiven got the first team ad carry.

Not that I didn’t think he deserved it, but I was surprised that everyone else valued him that highly as well, especially when you have players like Upset and Patrik in the league, who are performing so well. For a rookie player, it’s a fantastic achievement. He did a wonderful job.

He’s certainly someone that’s improved a lot. The fact that you, as a rookie player, can draw that many Draven and Kalista bans during your first-ever playoffs is wonderful. Full credit to him for that, I think he’s improved a lot.

But I want to mention Armut because I think he was the unsung hero of our roster. If you compare his consistency, his meta read and his champion pool in this split to the previous splits, he’s an entirely different player.

He was so much better this split in terms of his consistency, his champion pool, and his laning. Even stepping up inside the team and taking on more of a shot-calling role, taking on more ownership, really committing to making the team atmosphere good. I’ve been really happy with Armut this split, and I think he deserves a lot of credit for that.

If you look at the stats, Armut actually has some of the best laning stats in the league for the regular season. Probably not for playoffs, I haven’t checked the playoff stats yet.

In the regular season, Armut was really good, and he was a huge part of how we played the game. Many of our early snowballing and most dramatic games were snowballed through top, and then Armut doing well in teamfights.

He was a big part of that because he was good at generating pressure and picking early game matchups to help Elyoya play the game in his way. We couldn’t be the team that we are without him.