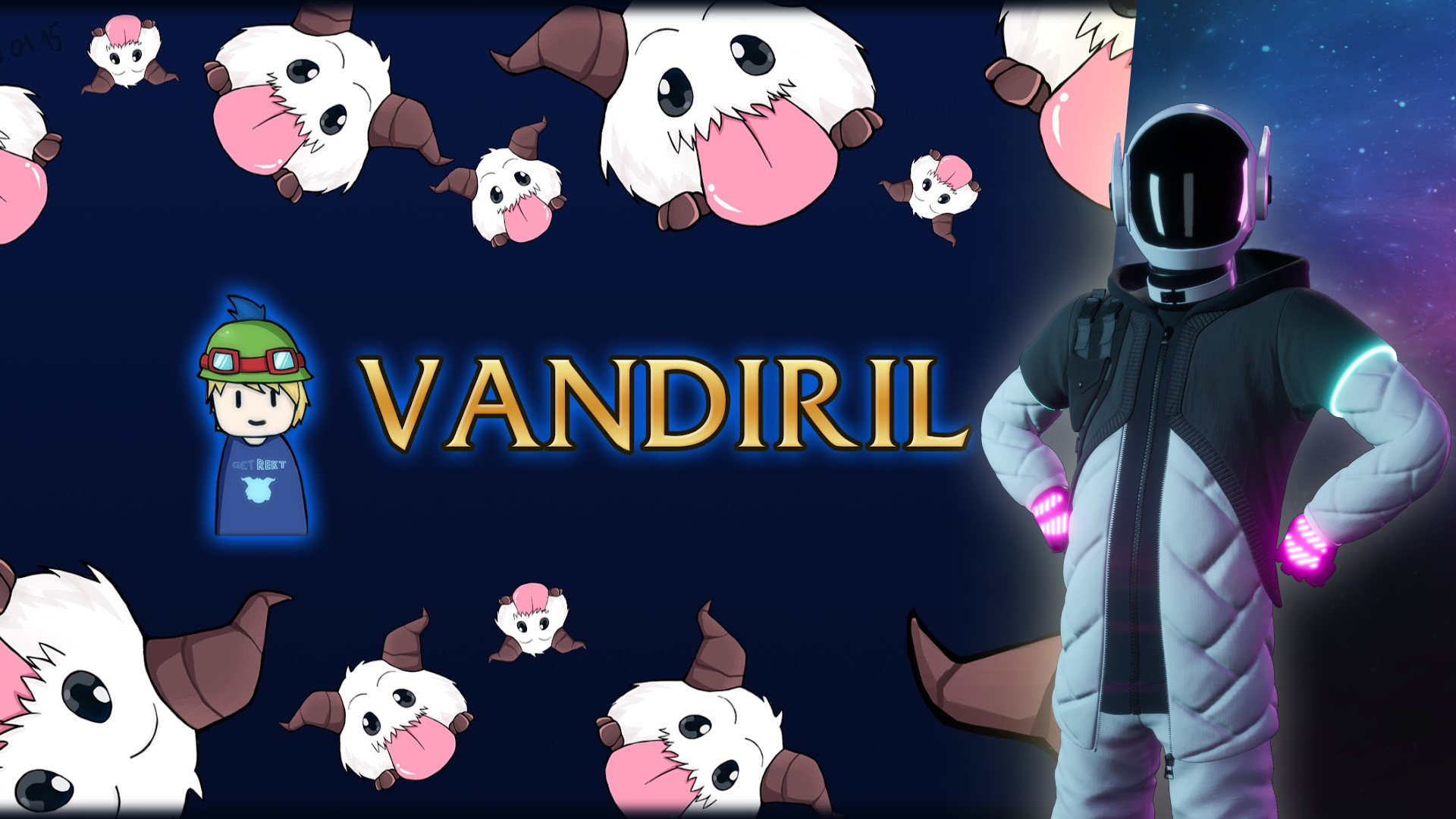 Interview with Vandiril, LoL’s biggest bug catcher: “I always like to break games”

In case you live under a rock, Vandiril is a Polish League of Legends YouTuber. He is a master at pushing the game to it’s limits and unveiling the secrets of LoL’s spaghetti code. Over the years, Vandiril has been responsible for discovering many game-breaking bugs and exploits in the game.

Most recently, Vandiril brought attention to a couple of serious bugs that even impacted pro play, such as the turret damage bug on Patch 12.14.

Videos on his YouTube channel are getting hundreds of thousands of views. It’s not only due to bugs themselves but also due to clever video presentations, great editing, and simply being funny and entertaining to watch.

Just as he was about to hit 1 million YouTube subscribers, I had a chance to sit down for an interview with the man himself.

Zoran: How was the idea of the Vandiril YouTube channel born?

Vandiril: Before Vandiril, I had a channel named Axilz. I did some videos there, but I had one copyright strike for some reason, and I wanted to start it clean. Originally I wanted to do Minecraft content on this channel, so I did. However, over time, it became a League of Legends channel. Vandiril is a name I got from cutting the elvish name “Yavandirila.” I was looking for a new channel name, so I just cut the front and back, so it sounds like a male name.

Zoran: What got you into filming LoL content and especially “catching bugs”?

Vandiril: My friend got me into League in June 2010. I met him outside and asked if he knew any new games, and he told me about League. So that’s how it started back then.

As for filming, I always did like making videos. The first videos I ever did were some screenshots combined in windows movie maker from the old school game Tibia, which was really popular here in Poland.

As for bugs, I don’t know. I always like to break the games. I always want to check the limits of the game, try to set up some records, and do something crazy. As a result, I often accidentally bug the game.

Zoran: Is YouTube still a hobby for you, or a full time job? Tell us a bit about yourself.

Vandiril: I am 29 years old, and YouTube has been my main occupation for the past 6+ years. However, I was still finishing my university degree when it started being my main occupation. I have a master’s degree in International Economic Relations, with a speciality in foreign trade. So if you consider that doing YouTube is selling services, you could say I work in my field. I started doing my first videos purely for fun somewhere in my late high school time.

University was basically five more years to figure out my life and not do a typical 9 to 5 job, haha. Since my health isn’t perfect, reducing stress is very important, and my current job for me is pretty stress-free.

Zoran: How did LoL and doing YouTube help you with your condition?

Vandiril: Around seven years ago, I was diagnosed with Ulcerative Colitis. I’ve been in remission for the past few years, so I’m doing fine. In fact, probably even better than before I was diagnosed (I always had some ‘tummy’ issues). Avoiding stress and taking care of myself is important to make it possible and stay fairly well.

All in all, getting diagnosed probably changed my life for the better, so there is no need to worry. Doing League content for a living and not having a “normal job” prevents me from having other people that are my bosses. I rely purely on myself and I have a fully flexible schedule.

I do what I want when I want, without anyone watching over me. And someone watching over me would be stressful. In my case, any stress tends to cause me tummy issues, so it is best to avoid them unless you like spending a lot of time in the bathroom. So I’d mostly say it’s about the freedom this game provides me. Although I do believe if it wasn’t League of Legends, I would still be doing this – just from a different game.

Vandiril: Great! I can’t wait to reach it and dedicate more time to other content.

I’ve done League of Legends for almost ten years, and it’s time to spend more time doing new things. However, I wanted to reach that milestone first before I did. So getting 1 million subs would be pretty cool, I thought, especially considering I never asked people to sub and didn’t use personality either.

Zoran: Do you still enjoy playing League of Legends, or do you prefer other games?

Vandiril: I don’t really love or particularly enjoy League of Legends these days. Personally, I believe Riot’s approach to focus fully on people grinding ranked is wrong. I miss cool game modes – and modes like Odyssey or even Dark Star Singularity were the ones that gave me the most fun in the game itself. I do love making videos regardless, so even if my love for League of Legends is long gone, I still really enjoy making videos. Guess that not playing League of Legends pretty much at all helps prevent burnout.

Elder Scrolls Online is one of the games I like a lot, as I enjoy entire Elder Scrolls worlds. I am also waiting for Elder Scrolls 6, so I can do some bug content, haha. But I don’t play it too regularly. I do like some games that require me to move though, like Ring Fit Adventures or Just Dance. Usually, I like to be active as much as possible and spend time outside (cycling is one of my biggest hobbies), but traveling or just walking around is something I greatly enjoy too. I am just trying to stay active this way or another!

Zoran: What goes into finding and testing a new bug? Does your community help you?

Vandiril: I think having the game knowledge is essential here. I don’t know almost anything from the programming side of things, but simply by intuition (oh, this champion works like X, and I remember other abilities that also worked similarly, so let’s try to do this and that, and we might find something interesting). You can find some patterns that bugs often share in League of Legends.

I do get A MASSIVE amount of bug submissions every day. Sometimes 25 emails per day, sometimes over 100 emails per day. I filter those, and often, you can find a new “pearl.”

Ever since Riot removed boards where you could report bugs, I started getting more and more submissions from people. Many people just want to see a bug fixed for their favorite champion, and they know reporting directly to Riot won’t do anything. But If my video gets 200 or 500k views, the chance for the fix increases drastically.

Zoran: How did the bug research change over the years? How did you do it back in the day?

Vandiril: Back in the day, bugs weren’t my primary form of content. I would mostly do videos from game modes (like crazy URF or OFA videos) and do some fun montages or try to beat certain records.

There were some bugs there, but way less than these days, when I think you could say that bugs are the major part of my content.

More viewers and more subscribers = more bug submissions. The more I grew, the more I could produce, pretty much.

Zoran: What is the craziest bug that you discovered?

Vandiril: That’s a VERY difficult question. I often forget the videos I did just a few months ago. I’ll go with the most memorable one – Banner of Command one on PBE. It was a bug that allowed you to Banner of Command every monster, turret, or even enemies.

If you used BOC on the enemy, and they killed you, you would get the kill and gold – not them. So I would use Banners on everyone and just get all their CS kill gold and so on. Extremely hilarious, as you can tell by the videos. It was so much fun to see gigantic turrets or Baron too.

As for live servers, probably something like the global Poppy Q exploit.

It was a pretty crazy and absolutely hilarious few minutes on the live servers. How often do you get to pentakill everyone from your base?

The cherry on top was that people who got hit by that Poppy even got banned for inting.

Zoran: What do you think about the amount of highly impactful bugs(especially for pro play) going under the radar recently?

Vandiril: I think that Riot does a pretty poor job at preventing them, but I am aware that having a 13+ years old game engine (sure modified by now but still) and a bunch of old tech isn’t really helpful.

You touch one thing, you break five others. It’s like a Hydra. But I do think Riot should definitely put more resources into preventing those things.

A lot of the time we see bugs on PBE, they are reported, but they still get shipped to live servers. Like, come on, WE REPORTED THAT on a TEST SERVER, and you still didn’t fix it?!

Zoran: Do you have any relationship with Riot? Have you ever been approached by them about a bug? Have they ever offered you a job and tried to use you as a resource?

Vandiril: I was recently approached by the person in charge of making bug lists for competitive play. He was super nice, and we plan on being in touch to potentially prevent big bugs from reaching competitive. Before that, not really. I had occasional talks with Riot August when he was doing a new champion or reworking one if I found any issues so he could fix them.

And a bit to my surprise, I thought it’d be reasonable for Riot to keep in touch with me, all things considered. Yet it never seemed like something that would be important to them, but that’s fair.

Zoran: I personally believe they are crazy not knocking on your door begging you to help.

Vandiril: I’d never want to join Riot for numerous reasons, but I do believe it could be helpful for them to be in touch. Although the bug community isn’t just me, we do have a pretty large discord group. If any issue is really important, there are some Rioters that we can potentially notify.

But it was pretty much Caenen’s initiative doing all of that, rather than any Riot officials starting it.

Also, I wouldn’t want to move to LA.

But no, they could offer me 100k a month, and I wouldn’t accept it (even though that obviously greatly exceeds what I earn). I like doing my own stuff, as long as I have enough to pay the rent, food, and doctors, I’m happy with my position.

Doing what I like is better than working in a corporation.

Zoran: Is there anything you would like to add?

Vandiril: I think following what you like is extremely important. I’d instead do my current job if it just allows me to survive, rather than work in a corporation for big, big $$$.

I know there are a lot of people who don’t like their jobs. I’d suggest them to try to change it. Don’t drop your current work (if you need it to survive) but rather try to grow the other one in your free time. I think doing the job that you enjoy is vital for your life. I can’t imagine doing the work I hate for 30 or 40 years of my life. It’s worth a shot. You may fail – sure, but at least you tried to change it.