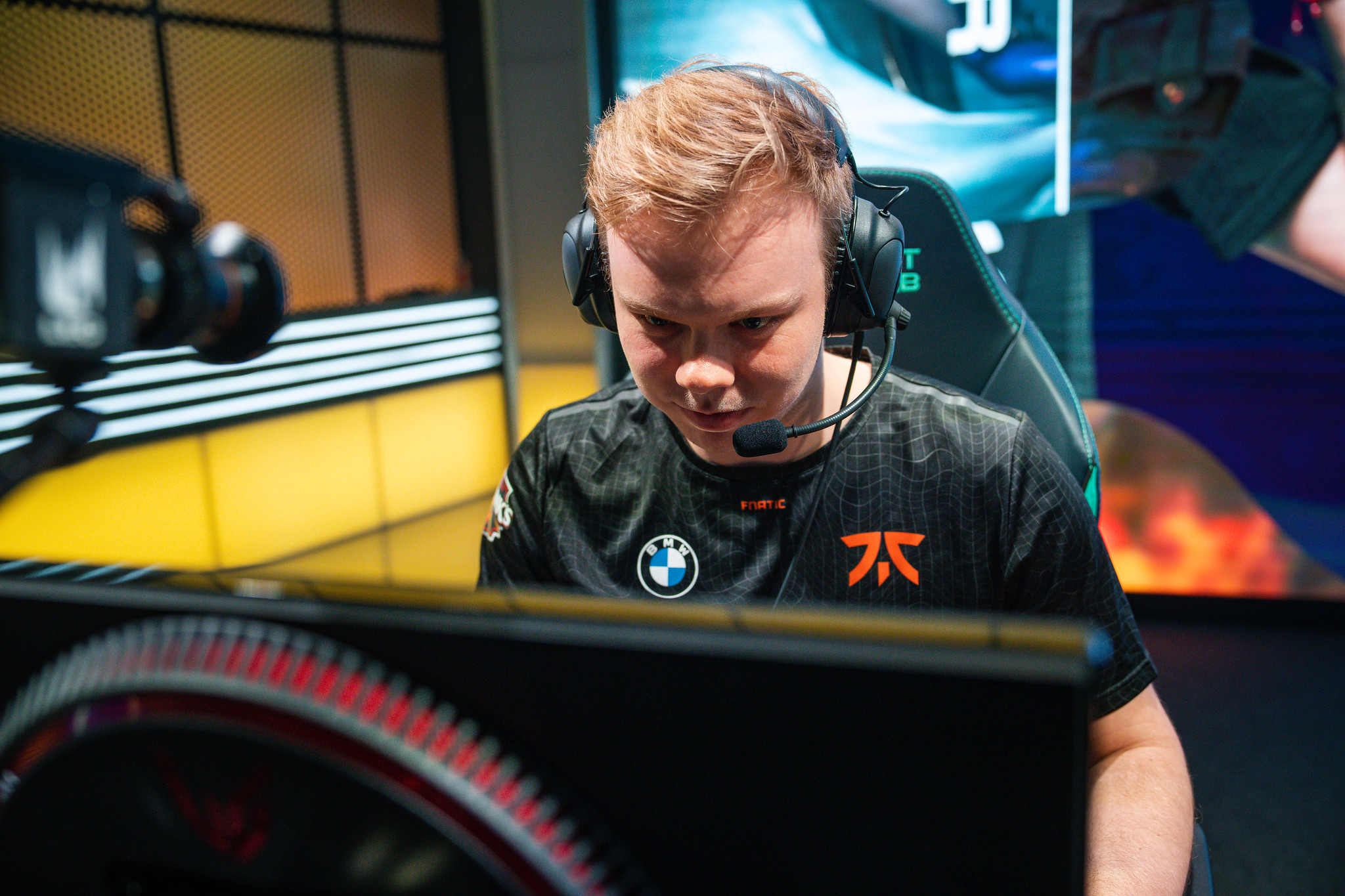 After Fnatic’s narrow 3-2 reverse-sweep victory against Excel Esports in the 2022 LEC summer playoffs, top laner Martin “Wunder” Hansen remained focused on what is to come. In an interview with Jaxon’s Adel Chouadria, he reflected on how the season went, and on how the team could turn it around.

The interview transcript has been slightly edited for clarity and is presented as is:

Adel: It felt really bizarre watching the series: I don’t know if it was a 3-0 or 3-2 given it was a reverse-sweep. On your end, how did this series actually feel to play?

But in general, they have been pretty good in practice at least, and also when we played against them on stage. So, for sure, I don’t think any game is a game that you can just roll over or think it’s a free win. Except if you’re G2 playing against Misfits. But even that series was kind of competitive for the most part.

So yeah, I mean, going into it, knowing that it can be hard game, it could be a 3-0 either side, or a competitive series. We didn’t play against them in practice because we are playing against them on stage. But yeah, they played really good.

I heard the rumors that they were really good as well, but we felt like we had probably the best two weeks that we had in a long time, at least results-wise. Against any team, we felt like we could win, and if Excel is doing good in scrims and we’re doing good in scrims, it doesn’t really matter in the end: we’re playing on stage. In the 2-0 start, they played really well.

I would say they had good drafts, but we also played something that we weren’t comfortable with, to the point where there was not much we could change. We just had to run it back with like small adjustments there. It worked out in the end.

Every game was, in a sense, winnable and lose-able. A lot of the games we won, we could have lost. And it was like a lot of small nuances that kind of brought it together, and some clutch plays or some ints from them or from us, or something like this, you know?

So, I mean, in theory, were generally was just a very competitive series.

Adel: I think like game three kind of sums up the series Pretty nicely, and it was like: “they’re winning! but then they’re losing, but then, they’re winning again! And then you’re winning!” It was wild seeing the last few minutes of that game.

Wunder: It was a crazy series. I’d say when I watch Rogue against MAD, there was a lot of late-game bangers; and then I watched Misfits against G2, and just like early-game stomps for the most part. And again us: at least a lot of the games felt like it went 40 minutes plus, with Elder and multiple Nashors. It’s always very exhausting to play.

We played five games in five hours, so maybe it was not as extreme, but a lot of the games were really late. Playing these long games, a lot of adrenaline and tiredness and all this kind of plays [into it.]

I don’t know if that’s the reason [Excel] got reverse-swept. I don’t think they got too cocky. They should be in theory, very hungry to win. And even if they’re 2-0, they should feel like they need to give it their all, because winning against not just Fnatic—but also some of the players on our team—is really big for most of them to prove a point.

I mean, I don’t think they got too overconfident, but maybe they were too tired, or we figured something out. I mean, it was still really competitive games, but it can go into your mind when you start getting reverse-swept, and you don’t really know how to handle it, I suppose.

Adel: To be fair, one of the places where I felt like they might have gotten into Fnatic’s mind was with the Nilah pick, but Game 4 was a nice adjustment when you ran it back with better execution.

Wunder: Yeah, I mean, for sure. Going into a series and, in theory, having a lot of locked bans because we did ban a lot of the same champs over and over, I guess we added Nilah to it after some of the games. So yeah, we had three locked bans. So the draft will look very similar in terms of what they [pick], they can always choose the same champs if they want to. We are not really denying anything from them for the most part, but we changed our priorities multiple times. So that’s why we ended up playing different champs as well.

In general, I wouldn’t say adaptation won us the series as much because they had very playable drafts, and it was very competitive coming out of champ select, and they could have won a lot of these games as well. But, probably, mentality, or clutch, brought us the reverse-sweep this time around.

Adel: Now, let’s focus more on yourself: you went from missing Worlds in 2021 on the final game, against the very team that you’re playing for. Then you got into Fnatic, and there were a few splits where you and everyone else were trying to find their footing. And now we’re here. How has this experience been for you—adapting to a new team and to a new environment?

Wunder: First split, we had a very good regular split in terms of the games. The scrims we had were really bad, and then we went on stage we had enough focus to play out the games pretty cleanly for the most part. I mean, for a lot of the teams in spring, it’s kind of bad as well, but we played some good games on stage.

And then, the whole thing where we got reverse swept and then got 3-0’d by G2 after, happened. All in all, we probably don’t deserve to: first of all, maybe getting third place in spring; and even making the playoffs [this split]. When it comes to how we have played as a team and done team things.

But a lot of these games have probably been carried by us being a lot more clutch or having good players. There’s for sure a factor where, I think, most teams in playoffs probably have figured out things better as a team than we have, which is for sure not a good sign.

The last two weeks have been better, and if we can ride the momentum, I don’t see why we shouldn’t be able to beat Misfits. Especially now, there’s four places at Worlds, and we are playing against Misfits who, in theory, don’t have any players that have been to Worlds before. Also, if anyone were to put these five players randomly at the beginning of the year, they would not predict them to make Worlds either.

We have a lot of things in our favor when it comes to this: it’s a bo5, and we are no longer playing bo1s to decide our lives. Making worlds is our first priority. We take it game by game, and the next game [against Misfits] is going to decide if we make it.

We would want to watch the Rogue-MAD series. I believe that we can beat both of those teams. And I think G2 is not looking as strong as they did in Spring. We did beat them one time, but then they came back and looked way stronger. So unless they get to that level again—maybe they are already getting there—but at least, for right now, I don’t think we are that much worse than G2.

Adel: And how are you finding this experience as a person, compared to old G2?

Wunder: As I said before, we don’t really deserve being where we are. We’re not in a good place or anything, but we don’t deserve to be even here. So, personally, I’m not satisfied with how this year has gone so far. Of course, we can turn it around. We might as well have gotten 3-0’d and the year would be over, and I would obviously not be satisfied. But even that it has gone to this point, where this was a possibility, I’m already not satisfied with how it has gone so far.

Of course, that is not a good feeling. But I mean, if we turn it around and make it to Worlds, and have a good showing, that’s what matters in the end, for that pretty much defines your whole year. So yeah, I still believe, until it’s not possible, that it’s possible to do so. Until we lose our last game of the year, I still believe that we can turn it around.

We would like to thank Wunder for taking the time to share his thoughts in his interview with Jaxon. As for Fnatic, they will play with a Worlds ticket on the line against Misfits Gaming on Friday, Sep. 2 starting 18:00 CET / 9 a.m. PST / 12 p.m. EST.