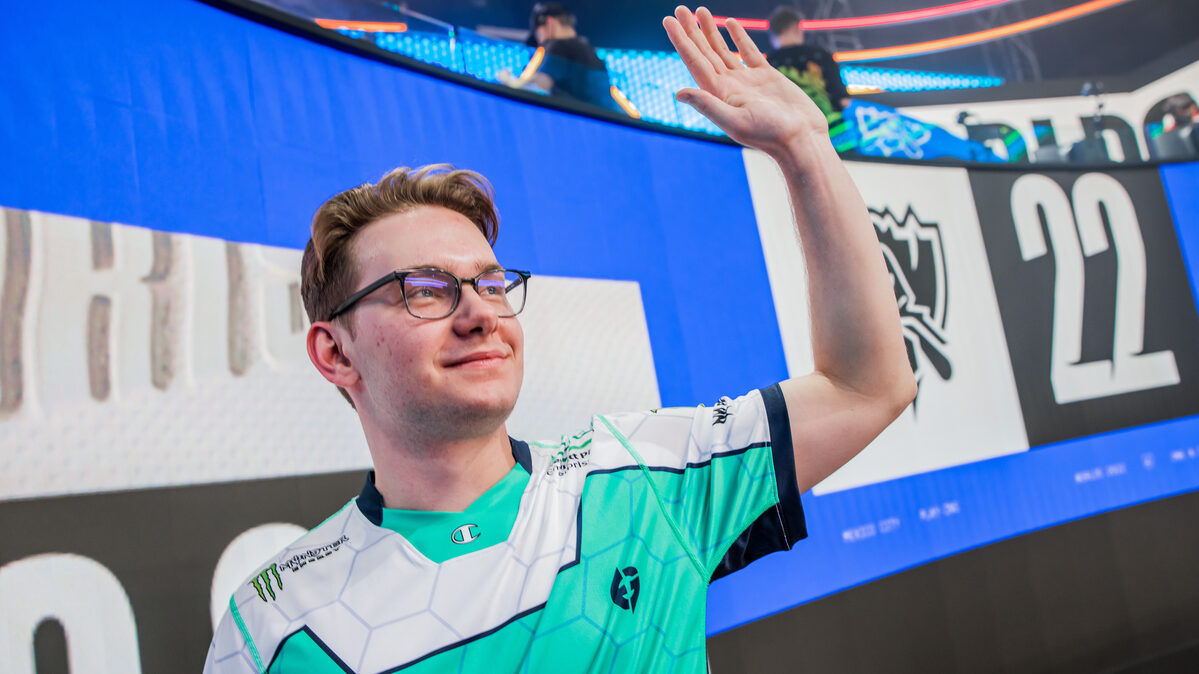 Evil Geniuses and their jungler, Kacper “Inspired” Słoma, had a setback early in the 2022 League of Legends World Championship after losing to Fnatic, but he was all smiling in our interview with him after a smoother Worlds Day 2 showing.

EG still has a shot at a direct qualification in specific circumstances if Fnatic stumbles, as a tie against them could compromise those chances. In our interview, we discussed the team’s chances at qualifying, the schedule of the tournament, and the hot topic of Champions Queue.

EG, Inspired show up on Day 2 after Day 1 stumble

Yohan: Congratulations on both victories today! Definitely better showing from you guys and picking up two wins. What do you think changed today?

EG Inspired: Everyone who doesn’t really know the game thinks we played very badly, but I think we played okay versus Fnatic. We made some good decisions, but we misplayed mechanically and that’s why we lost the game. That’s why it looked kind of one-sided.

Today, we still had good plans but didn’t misplay and were more aware of what was going on everywhere on the map. I think the mistakes from yesterday were done because it was the first game for us in a while. Maybe we were not completely ready and there were a lot of problems with the fact that we had to play from the hotel.

Everything was very chaotic, but I don’t think there were any big improvements compared to yesterday.

Yohan: You’ve played at Worlds before. Do you think the previous experience is helping you perform even better this time around?

EG Inspired: Yes, definitely. With the last Worlds and MSI this year, I don’t feel the nerves anymore. I don’t care if I lose because I know that if I perform to my level I can win any game.

There is no fear anymore, compared to my first Worlds experience. I know that you can win even if you are playing against a better team because the games could be very even and everyone can make mistakes.

Yohan: What is your opinion on the fast-paced format of Worlds? Would you change something if you could, because it also feels a bit chaotic?

EG Inspired: I agree with that. The Play-ins format is not that good in my opinion. For example, our game against Fnatic was basically who makes it out of play-ins instantly, right? If we beat them, we are getting out and vice versa. The other team would have to play a bo5.

I think it’s weird, because even if we have the same score, they are ahead of us, which shouldn’t be a thing because we both lost one game. They can still go undefeated but I’m just assuming, of course.

I would rather have two bo1’s in the groups because then we can also play both blue and red side. I do think that blue side is quite stronger right now.

It’s a bit unfair that we had to play from red side against them, but I see why Riot didn’t do it. It would take a lot of time and they probably don’t want to waste much on the Play-ins. If it was up to me, I would for sure play two bo1’s against every team.

Yohan: What about the circumstances? There were a lot of technical issues, as well as problems with the COVID tests. Do you think that impacted you and the team?

EG Inspired: I mean, it could have impacted us on the first day of the tournament, but it could’ve also impacted every other team. Like Fnatic for example, they all played from the hotel, but it was different for them because they all played together from the same room.

For us, our coach was in a separate room, and the same goes for Vulcan. We were as four on stage and I think it was way worse for us than for them. But I guess that’s life. Right now, we have to focus on our next games and hopefully win our bo5 and make it to the main stage.

Yohan: Going back to the high-intensity schedule, burnout has been a big topic in the scene. You also participated in every possible tournament so far with MSI, Worlds and the LCS. Do you think MSI had any burnout effect on the team, not having enough time to rest?

EG Inspired: I don’t think it had any effect on me. I don’t know about my teammates, but I had a two-week break after MSI and before going for the next split. However, I feel like during the regular season in NA I’m not really tryharding much. The meta is always so different when compared to Worlds.

So, I always take it very easy during the regular season and I lowkey play for fun. Then when the playoffs come, I try to figure out what’s good to play and I start trying harder to win. I think it’s a bad approach to be in full focus to win through the whole year, because then you can maybe cause burnout.

Yohan: We’ve got a small view of the meta so far and we’ve seen you play three different champions at Worlds 2022. Is there any champion on your radar that we can see debuting in the jungle?

EG Inspired: It’s usually Chinese and Korean teams that make the meta, because they beat you in scrims and you think that anything that they play is actually good. But it might be just a player gap, so I think people play what they are comfortable with. There was Graves and a lot of early-game junglers.

I feel like this might be the strongest way to play. Hecarim might be an outstanding champion because he is very good as compared to all the melee champions that are played in the jungle. He also outfarms them, so if the game is not too chaotic in the early game, Hecarim can have a lot of value.

I can see a room for Fiddlesticks, he can be picked in certain situations. Other than that, I think it’s way more comfortable for the whole team when you are playing an early game champion. That’s why there is a lot of Graves and a lot of power early. Lee sin as well and also I’ve played a bit of Viego. Maokai is strong for teamfights, that’s why people pick him, and he is also a good champion.

Up next for Evil Geniuses in the play-ins:

Yohan: For your next games, you will be facing Chiefs and DetonatioN FocusMe. What should we expect from those games and which team have you been most impressed with so far from your group?

EG Inspired: I’m not really impressed with any team honestly. People will feel like I’m just coping here but I don’t think Fnatic was very impressive. I think we played okay every game, and the same goes for them.

The only one that impressed me so far was DRX. I played against them in scrims and I saw that they are really good. Even though RNG lost a game to them, I think they will win all of the other games. So in my opinion, RNG and DRX are the best teams.

Coming into the next two games with DFM and Chiefs, I actually think DFM is not that bad of a team. Their jungle and mid are the two best players on the team. It might be a tough game to play, for me and Jojo. I mean, they didn’t look too hot in their two games, but sometimes mistakes happen in a bo1 and then the game gets out of control. So, I still need to not disrespect them and take the game seriously.

For the other game, I think they are the worst team in the group. As long as we play to our normal level and we don’t make any crazy mistakes, we should be able to take them.

Yohan: And who would be your ideal opponent from the other group? You already mentioned that you will most likely play a bo5, so who would you rather face?

EG Inspired: It will be a disaster if we have to face either DRX or RNG, because both are very tough opponents. If we place second, I guess we will play either against Saigon Buffalo or Mad Lions.

I think both teams are on a similar level. MAD is more coordinated but Siagon are very aggressive and they can surprise you with random plays. I don’t know which of these teams will win the bo5 and I don’t know which I would prefer to play. Maybe MAD Lions, because I know their playstyle and I know the players.

Yohan: There was a lot of talk on Champions Queue recently. People are saying that it’s filled with lower-rank players and one-trick, which makes the practice inefficient. You’ve played Champions Queue before and I suppose you are playing it now as well. How would you comment on that?

EG Inspired: No offense to North American players, but I think they usually suck. When you play with NA amateur and most of the academy players, a few are good but the rest are kind of bad. It’s annoying to play with them, especially when the enemy gets good players. Then you have to play through it and most likely you will not win, because the enemy team has comms and they will not int the game for fun.

When the Worlds players came, I think it became fun to play because the games are close and actually exciting to play. The biggest problem is that in NA, there are not enough good players. That’s why I think that if Champions Queue was a thing in Europe, it would be very fun to play.