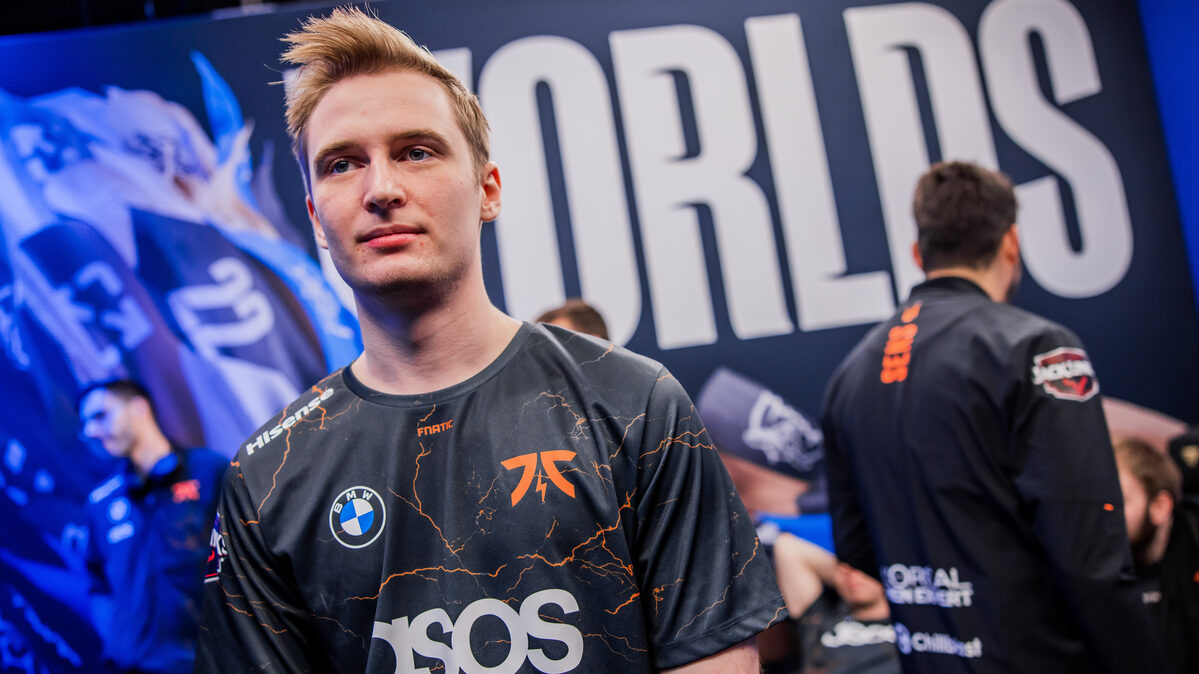 "We can for sure win it all"

Fnatic and Marek “Humanoid” Brázda lost their first encounter against the 2021 World Champion, EDward Gaming, at Worlds 2022. Despite the early game setback, the European team made the game entertaining for the spectators and fought until the very end. Unfortunately for Fnatic, they did lose in the end, but that type of performance carries a lot of faith for the future.

With the loss, Fnatic has formed a triangle on top of Group A alongside T1 and EDG, with all three teams at 2-1 in the standings. Cloud9 remains last in the group with a 0-3 record.

The early game was an issue, but Fnatic fought back

Despite the chaotic early game, which put Fnatic in a major deficit, the team was able to shrink the gap in the teamfights. There were moments during the game that made fans believe in the comeback, and Fnatic almost made it happen. Following the loss, Humanoid spoke to members of the media on various topics, including Fnatic’s chances at Worlds 2022, the game against EDG and the Fnatic Week 2 buff.

“I feel that we played better than them [EDG] the entire game,” Humanoid said. “The only reason why we lost is because of the Level 1. I was surprised that it took them so long to finish. Their composition wasn’t that great as well. I guess that’s why the game was a bit more even.”

Fnatic made European fans believe once again with their recent performances. The loss to EDG feels more like a learning process rather than defeat, and even Humanoid is surprised by how well Fnatic is playing so far at Worlds 2022. Whether the team has a chance of winning the whole competition, the mid laner said the following:

The “Fnatic Week 2 buff” is historical throughout Worlds history. The organization defied expectations many times and proved that nothing is impossible when the stakes are high. The most notorious cases of “the buff” are The 2017 World Championship, where Fnatic qualified for the quarterfinals despite the 0-4 start to the Group stage, and the 2019 World Championship when Fnatic was 1-2 down and eliminated Royal Never Give Up in the last match of that year’s Group stage.

During Worlds 2020, Fnatic found itself in a similar spot in this year’s Worlds edition: they had a 2-1 start and eventually made it out of groups. Humanoid shared his thoughts on the possibility of another great Week 2 performance for the organization:

“Hopefully, it’s going to be a 3-0. Honestly, I would say we are the favorite against any team in our group with how we are playing. But, we can also run it down, you never know. I can’t really promise that much.”

Fnatic had a tough time prior to Worlds 2022. Due to the COVID situation within the team, the players couldn’t get much scrim time and Play-ins looked like the perfect opportunity for practice. Fnatic was able to “warm up” for the main stage of the tournament, and the learning experience from the Play-ins seems to be in their favor.

The Play-in stage helped Fnatic improve at Worlds 2022, and Humanoid added the following:

“If you don’t play in the Play-ins, you go from LEC finals to playing in the Group stage. Then you play on stage after one month of not playing, which can be shaky for the first [few] days. It’s pretty good that you can get some games on stage before the main event begins.”