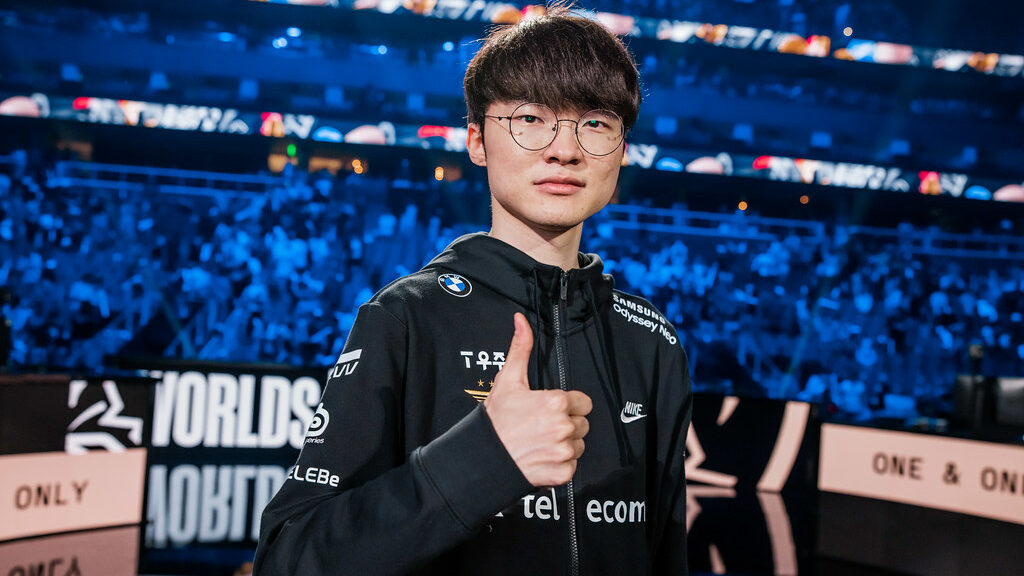 The long wait is over

He’s back: Faker will be playing his first Worlds final since 2017

It’s been five years since Lee “Faker” Sang-hyeok has played at a Worlds final. However, the long wait is over and the legendary mid laner is heading to the Worlds 2022 final. After a decisive 3-1 victory against JD Gaming Intel Club, T1 once again earned their place on the biggest stage.

“I’m extremely happy right now, I had a good feeling this year and I’m just one step away from it. It feels really great and this time around, I will hold onto this opportunity for my fans”, Faker said during the post-game broadcast interview with Daniel Drakos.

Last time around, in 2017, Faker experienced the taste of defeat as SK Telecom T1 lost 0-3 in the finals against Samsung Galaxy (Gen.G now). That moment has been haunting Faker to this day, and many have questioned whether T1 will ever make it back to the top.

After his unique performance in the semifinal against JD Gaming, Faker proved that he wants to earn his “World Champion” status back. His Azir ults threw the Chinese Champion straight out of the competition and Faker will be playing his 5th Worlds final.

It gets even more personal. On the other side of the bracket, Gen.G are a potential finalist if they overcome DRX. There would be nothing more entertaining than seeing Faker face off against the team that last defeated him in a Worlds final.

Moreover, Park “Ruler” Jae-hyuk was part of that Samsung Galaxy roster and he is still the AD carry of the team. On November 6, the “Demon King” will be looking forward to his revenge and an opportunity for redemption.

T1’s era is one to remember. Winning three out of four possible World Championships between the period of 2013-2017 is an astonishing achievement. However, it took a while for the organization to make its way back to the top.

Since the 2017 final, T1 have been to Worlds only twice. During 2018 and 2020, the organization didn’t even make it to the competition. As to 2019 and 2021, both were successful but T1 were only a step away from achieving a final as they got eliminated twice in the semifinals. Recently, the team also lost in the 2022 MSI finals against Royal Never Give Up.

However, now they have finally broken the curse and will be marching toward the 5th final in the organization’s history.

“It’s been a very long time since I’ve been to Worlds finals, so it motivates me more. It makes me win the championship even more”, Faker said to the media during T1’s post-game press conference.