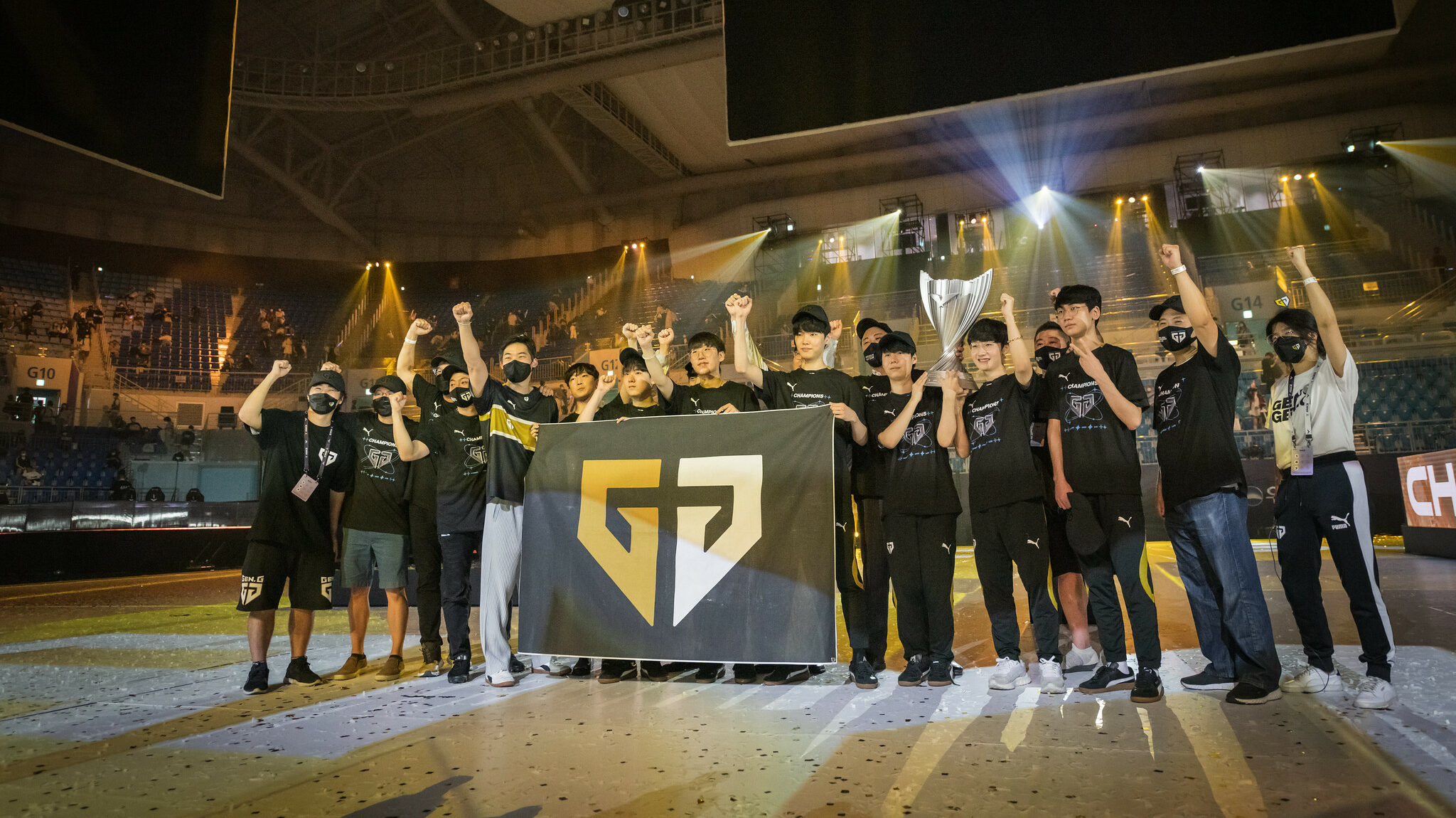 The 2022 World Championship’s Pick’ems came with a surprisingly expanded Crystal Ball section, one where making an informed prediction is tricky. Even within Jaxon, it’s a head-scratching exercise for our panel.

So, instead of holding a unified prediction, Jaxon’s panel has decided to have each vote visible, as there are various viewpoints informing each individual decision. Our panelists are as follows:

Those looking for the provisional results (rather than predictions) can click here to find them.

Champion votes in the Crystal Ball highlight some variance

Our panel has somehow managed to tilt Nick “LS” De Cesare with the Renekton shoutout as Most Picked champion, tilted everyone with Yuumi, almost fully agreed about Seraphine’s versatility, and agreed that a frontline champion will die the most at Worlds.

In the current meta, Renata Glasc and Soraka are among the most lethal supports available to players. Although Soraka has shown her prowess in the LEC finals, Renata Glasc remains a powerhouse in teamfights.

Furthermore, as Yuumi vanishes from play (or should, at any rate), Renata will be a solid pick into other supports in lane and during teamfights (where her Ultimate—Hostile Takeover is a free win button when used right). That Ultimate alone is a game changer, especially in the teamfight-heavy gameplay nowadays.

After gaining popularity late in the Summer split, Soraka is ready to fill the spot that nerfs to supports like Lulu and Yuumi has left vacant. Factor in her positional versatility (she’s been played everywhere except jungle at least once in 2022), and you have a champion that many teams will look into banning.

However, if she does manage to survive the ban phase, expect that versatility, as well as her incredibly potent kit, to be a major difference maker on the Rift.

Picking Yuumi as the most-banned champion at Worlds is indeed a risk, especially after Riot gutted her on Patch 12.16. With that said, I’m taking my chances and predicting that Yuumi will still be a pick that no one wants to see on the professional stage.

Riot has nerfed Yuumi before where it was enough to shut her down in solo queue, but not enough to get rid of her in professional play. If Hecarim is a strong meta pick at Worlds, do you really want to risk it?

Renekton and Maokai will rise throughout the meta ranks during Worlds 2022. The top regions already introduced Renekton over the playoffs, and knowing how high the LPL teams value him, he will be of the utmost importance to them. Also, let’s not forget: Renekton is a simple champion, and every professional top laner played him in the past.

As for Maokai, the buffs that he received are too much. His Q now deals bonus damage to monsters, and we can potentially see him in the jungle. Judging by the top players’ solo queue accounts, he is also played in top lane and as a support, eventually making him the most flexible champion during Worlds 2022.

Unfortunately, there is no Doinb to pick him in mid lane, but plenty of teams would be willing to experiment, and that is the perfect opportunity.

The role likely to see the biggest meta shift is support, as we move on from enchanters to engage champions. Speaking of which, Thresh received, a small buff on Patch 12.18 and could be a strong pick at Worlds. As drafts shift away from bot lane focus, they will leave plenty of room for Thresh to emerge. A lot of games = a lot of engages = a lot of deaths.

That's a lot of GALAs in our Player selections

That's a lot of GALAs in here, but we have to pay respects to the one fool who decided to place his faith in EDward Gaming's hands by selecting Viper as the player with the most kills in a single game.

Although GALA would be the obvious pick considering his presence in the play-ins, and considering Royal Never Give Up's competition there, Viper is the likeliest to go on an absolute tear—even as EDward Gaming (hopefully) reach the playoffs and advance to Best-of-five (bo5) games.

Viper's positioning and sense of initiative haven't changed since 2021, and that's enough to earn him my vote, with expectations for him to stand out in lengthier games.

Chovy is finally at an international tournament where he doesn't have to play every match as a 1v9. Going from Hanwha Life Esports to Gen.G has been a great career move and, at last, allows him to excel without having to carry every match on his back. Expect Chovy to take this touranment and run with it as an example of just how good he is.

Ruler is a beast. We all know it, and we have all seen it during the 2022 LCK Summer Split. Not only is he a beast, but he is also a consistent beast. He is the type of player that can carry his team while staying out of trouble. He proved this during the summer, when he rocked the highest KDA in the LCK at 7.6. There will be a lot of pressure on him and his team to perform in this Worlds, but Ruler is the type who can withstand it.

Ruler could also be the one to get at least a pentakill in the tournament. If he is playing a hyper carry, it’s always pentakill territory. Bot laners are often the ones pulling off the incredible team fights and the best in this tournament happens to be called Ruler.

With a total of 23 unique champions picked, Keria has proven that he can play absolutely everything this year. Not only does he have a champion "ocean," he also makes it entertaining. Both T1 and Gen.G are teams that love experimenting, and it works. If you are wondering who would pick Lee Sin or Camille support, your best bet for this category would be Keria.

JDG was the most consistent team of 2022 in the LPL, and all of their players are Top 5 in the world in their roles. They had a spectacular playoff run, so they have every right to feel extremely confident heading into the tournament. They will roll a lot of 9s (not just their top laner).

As for our Team-related Pick'em selections in the Crystal Ball...

Other than stray moments of individuality, our panel mostly agrees on most of these categories. However, the top team in the play-ins Group A is a source of contention.

You can click on the following snippets to explore what motivated some of these choices (others are covered in previous snippets):

Group A has one obvious winner, and it is not from a major region: DetonatioN FocusMe. While Fnatic and Evil Geniuses are struggling to plug substitutes on their lineups, DFM's roster is set to punish macro and micro mistakes at every turn, especially in the bot lane with the legendary Yutapon holding the reins.

Furthermore, DFM's competition isn't in this group, but in the group stage, where they can figure out if their offseason moves allowed them to upgrade their roster in 2022. Thus, anything less than first place would be an upset.

Fnatic had a very turbulent season and, in the end of the day, are happy to be at Worlds. To make things worse, they are having issues with traveling and scrims. However, the Fnatic Worlds buff is real, and the sheer amount of skill and experience on that roster will get them on top of a very open Group A of play-ins.

Evil Geniuses will win group B because of one simple reason: preparation. The team had more time to prepare compared to Fnatic, and also will feature a single sub. Don't forget that Kaori already has a couple of weeks with EG, whereas Fnatic's subs are last-minute call-ups. They didn't even scrim yet, and the tournament starts in a couple of days. Of course, it's hard to trust NA on this one, but the level of the top regions is still miles ahead of the minor ones.

All four LPL representatives are title contenders in 2022, so anything but RNG getting the top spot in play-ins would be a surprise. Despite their late season struggles, the MSI champions are the best team in group B (sorry, DRX). Get ready for some GALA Kai’Sa Pentakills.

Gen.G went all in on building a roster that could win Worlds this year. After falling to the unstoppable force that was Spring T1, Gen.G cruised to the LCK Summer title. From their generational talent midlaner to seasoned veterans in the bot lane, this team has conquered Korea and is more than capable of going the distance at Worlds.

In all seriousness, a preference for CTBC Flying Oyster over the panel's GAM Esports consensus is only about 80% due to CTBC Flying Oyster being the best team name at Worlds. This is a PCS team that only joined the league this year, with a roster that didn't have much history of success, and went on to record top-two finishes in both splits.

But beyond that, Gen.G/100 Thieves is something of an easier group than Top Esports/Rogue (sorry but not sorry NA). With the PCS also being the giant-killer region at Worlds, that's why my eggs are in the Flying Oyster basket.

And in comes the coin-flip on tournament events

Predicting correctly in this category is equal to tapping into obscure knowledge of the future—to which no one on planet Earth is privy. At least, we like to think so. That said, our takes reflect our Worlds 2022 expectations.

One would think that I am expecting terrible gameplay, but it's the other way around. Let me explain:

Because of this, I expect a bloodbath, one to be remembered for future seasons.

It’s probably a conservative pick and more Pentakills would be absolutely awesome, but a Pentakill on the Worlds stage is such a rare thing. The pressure is on, and only very few players have the guts to go all-in and hunt these Pentakills. It would be a shame if there was going to be none, so let’s hope for one great Penta.

It’s always hard to predict game length, as you never really know when someone stalls a game for over an hour with Azir and Sivir. With that said, 45 to 50 minutes should be the spot where the very late game gets decided. At this point, there will be enough power and Elder Drakes to close out a game.

In conclusion: when there are many viable options, follow your gut

The wealth of options available can lead to difficult decisions. However, making a decision is better than making none, and Pick'Em Crystal Balls are one display among many where this stands.

Ultimately, as nobody can read the future, there is no set right or wrong. So, let's have fun and act as if we knew everything that would happen all along—err, celebrate when we get one right.