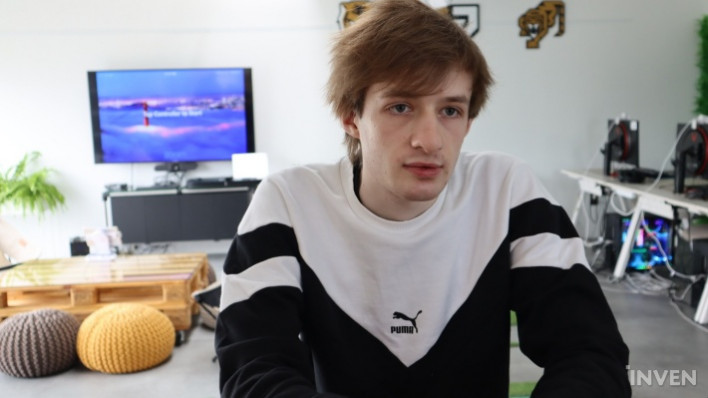 Gen.G Nemesis: I don’t want to go back to pro play if it means I’m going to join a bottom-tier team

INVENGlobal recently secured an interview with ex-fnatic midlaner Nemesis, who has been bootcamping in Korea while he doesn't have a team. Though his first year on fnatic showcased that the Slovene can hang with the best of them, he saw some criticism for his performance in his final year. However, he's keen to prove he can still be a key piece of a top team.

Hello Nemesis! Welcome to Korea! How has your time been since you arrived in Korea?

So far, I like it here. I visited a lot of restaurants, some amusement park that was near IKEA that LS and I went to, went to go watch a movie at the cinema… Basically, lots of good food; steak, Korean barbeque, waffles, and frappes. Oh, and Subway, of course; it’s much better here than Germany. Korea’s too “broken”. [laughs]

"I think that there are really good amateur players in the scene that I’d love to get a chance to play with."

Is this your first time in Korea? How long are you planning to stay here?

For now, I have a visa that allows me to stay here for 13 months. My plan is to stay here at least until the end of the year. Right now, there is nothing for me to do; I can’t go back to pro play at this point in time, and I have to wait until the season is over. Reasons such as KR solo queue, content with LS, among many other things, as opposed to staying at home and doing nothing; the answer was obvious.

Can you please share some of your fondest memories during your time as the mid laner for Fnatic?

The memories that stuck with me from my Fnatic days have to all be when we won games. All the games that we won, especially those that had a lot on the line, are the ones that stuck with me. Outside of game days, the most fun memories were with Pete, the camera guy on Fnatic, and Shaves, the strategic coach from last year. As a team, I remember having a lot of fun tree climbing.

I remember watching your reaction to the LEC segment that talked about underrated players, and Rekkles mentioned you.

When I watched it, I thought it was a little bit funny, because obviously, I have a lot more information about my previous teammates. I had a lot of one-on-one discussions with Rekkles back in Fnatic, so I know a lot more about how he thinks. Since last year, there’s been a lot of negativity surrounding my name, so when he mentioned me publicly like that, I was ecstatic.

I think a lot of people can relate to the sentiment that you’d have no problem continuing your career as a pro player. Can the fans expect you to be back in the competitive scene next season?

Right now, I’m focusing on being a great streamer/content creator. Going back to professional play is undecided at the moment because I have to see what kind of offers I’m going to get by the end of the year. For it to be worth it, it would mean that I would have to be offered a much bigger salary, because right now, I’m practically earning the same, if not more as a content creator for Gen.G.

I don’t want to go back to pro play if it means I’m going to join a bottom-tier team. I’ve experienced too many issues in such teams, and I’d only like to play with specific players of my choosing. I think that there are really good amateur players in the scene that I’d love to get a chance to play with. We’ll see how the future unfolds.

What made you decide to work with Gen.G after you took time off pro play? Given your status, I’d assume that you would’ve had many offers on the table.

LS was the one that got me in contact with Gen.G, due to his friendship with the COO, Arnold Hur. Crownshot and I talked with him, and because neither of us had good enough offers on the table, we felt that this was the best opportunity for us. Crownshot, however, moved on to join Vitality, and for myself, this was the best opportunity in Korea I could get. Arnold offered me a great contract with great conditions, so I said, “Why not?”

"I think that pro players will like Viego, but I don't think he's very good."

The Korean teams are slowly opening up to foreign talent, and there are talks of LCK teams starting to contemplate importing Vietnamese players. If the opportunity to join an LCK team presented itself to you, would you take it?

MSI 2021 is coming up. Most regions played on patch 11.6, and the MSI patch is 11.9. How has the competitive meta changed over three patches?

While there have been a lot of patches since the playoffs patch, they didn’t make any significant changes. Usually, such changes aren’t enough to outright stop pro players from picking champions that they want to play or are comfortable with; it’s not enough to bring them out of their comfort zone.

I’m not saying that the meta is going to be the same. There are going to be new champions that are going to rise in tier, while some are going to fall off. For example, with the nerfs that Hecarim has been receiving over time, and with the most recent changes on patch 11.9, I think that he’s not going to be picked as much as before.

Champions like Vladimir and Rumble will most likely see some competitive play because of their buffs. I’m 100% sure that we’re going to see Lee Sin being picked, mostly in solo lanes; I feel he’s going to be highly contested, if not banned. For the junglers, I don’t know if we’ll see Diana be picked, but I predict Morgana will be highly contested. Some champions, like Jinx, will still remain strong in the meta.

All of this will also depend on scrim results as well. How it usually works is, the strongest/scariest teams will play their own game in scrims, win most of them, and everyone else goes, “Oh, this team played this champion, so we have to play them as well”. All those that just copy others will just end up losing in the end.

You played a lot of Tryndamere on your recent stream: Are there any solo queue exclusive champions that have the potential/you’d like to see picked at MSI?

I think that over the years, Tryndamere has been one of the most under-researched champions in the game; he’s an old champion, and I think most players don’t like him because he gets kited easily, and the fact that he doesn’t run Teleport is weird. I’ve always been a Tryndamere fan; I think he’s been competitively viable for years now as a solo laner [top/mid].

He’s obviously strong in solo queue, and he just has to fall under the right conditions to be picked in competitive play. The reason why he’s gotten so much attention from me lately is because I’m close with a Challenger Tryndamere one-trick named RANGERZX in EUW, and I talked to him a lot about the champion and how he plays it.

People say that champions like Katarina are strong, but I don’t think she’s strong at all. The obvious one that comes to mind is Lee Sin. I’m confident that he’s going to be picked. Other than that, Gangplank should be higher on the competitive tier list, due to the Trinity Force buffs. I also think champions like Fiora are strong, but she’ll just be a niche pick. You need to be insanely good at the champion; that’s why only one-tricks can make her work.

Viego and Gwen will remain disabled during MSI. If they weren’t, where would you rate them inside the meta?

I think pro players will like Viego, but I don’t think he’s very good. He’s too conditional, and I think he has a bad kit; his kit is heavily relied on getting ult resets or getting his passive off. He’s one of the newer champion releases that I highly dislike. The champion doesn’t actually bring much; he can’t stay alive in teamfights and gets killed really easily because he’s squishy. He would work as a counterpick to a melee champion. He’s really oppressive against melee champions because of constant poke, AA range, and higher base stats.

Gwen however, I think is much better. I really like her. She was a bit weak when she was first released, but she got some hotfix buffs, so she’s much better. She’s one of those champions that’s going to constantly get better because right now, players are still learning and experimenting with her. If she was enabled during MSI, I’d say she’d get picked. She’s very simplistic but has a lot of skill expression, so I think she’s good for the game.

If I compare myself to a typical solo queue player, I personally have higher tolerance to toxicity and intentional griefing. When comparing EUW to KR solo queue, I don’t think one’s better than the other, but I do think there are differences. Korean players are much better mechanically; I can feel that the overall mechanical level is much higher.

However, I think that EUW players play out the mid-late game much better; the players are less prone to tilt, and flame way less compared to Korea. Korea has a different meta, where it’s more focused in the early game. The games are decided really fast, which also brings more skill expression because there’s more fights, which leads to more outplay potential.

For a while, people have been saying that getting high on the ladder, or getting rank 1, doesn’t matter. From your perspective, why is that so?

I think getting rank 1 hasn’t mattered for years now. It’s not just a recent sentiment. Players like Dopa, and even LS talked about the topic in recent days, but it hasn’t mattered for a while. Players can be complete garbage at the game, yet they’re still high Elo; this is because people figured out ways to abuse the system, one of which is dodging. I’m not going to call out any names, but in the past year, there have been many players that were rank 1, but were not good at the game.

Goals for 2021 and beyond? What are some of the things you want to achieve?

Lastly, are there any special shoutouts that you’d like to make to friends, family, and your fans?

Thank you to all the fans for supporting me. I’m getting a tremendous amount of support from fans nowadays, and I’m forever grateful. A special shoutout to LS for helping me out in Korea, and everything else he does for me, as well as Gen.G for welcoming me into Korea and taking care of me!