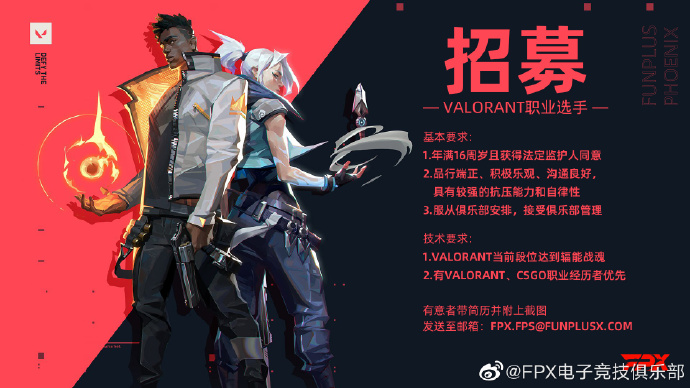 FunPlus Pheonix is actively searching for Chinese Valorant talent, at least according to a post on their Weibo account.

The post says that players must be at least 16 years old, have hit Radiant, and preferably have professional experience in a game like CS:GO.

.@FPX_Esports have published on their Weibo account that they are recruiting Chinese players for a VALORANT roster.

Players must be at least 16, have reached Radiant rank, and preferably already have experience in either VALORANT or Counter-Strike.

Although FPX is based in China, they have a Valorant team comprised of EU players.

Their current roster is succesful as well. They'll be competing in the VCT Stage 3 EMEA Playoffs later this month.

If FPX fills out a roster with Chinese players, we expect them to keep their EU roster as long as they're performing.

They could even compete in multiple regions, similar to orgs with all-female teams like Cloud9.