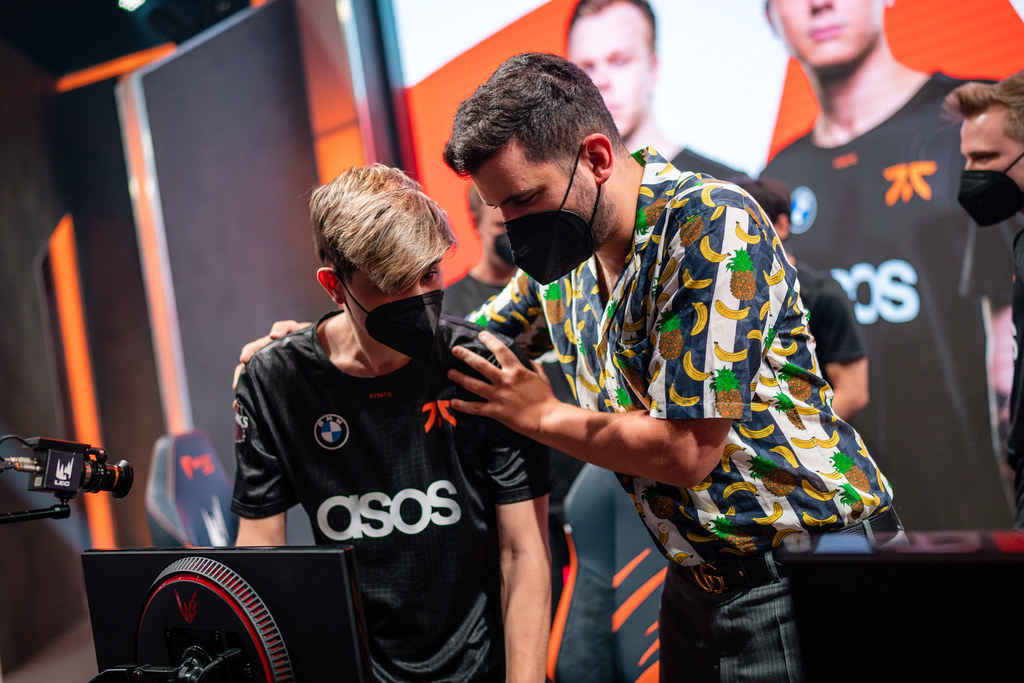 Winning is the only option

FNC YamatoCannon: Anything but ending on top would be a failure

After setting high expectations at the start of the year, Fnatic failed their quest to capture the LEC trophy in Spring 2022. The team was unable to break through the wall that was hit, following the reverse sweep from Rogue in the playoffs, and this time they are looking to redeem themselves on the rift.

The first week of the 2022 LEC Summer split was somewhat of a success for Fnatic, and a lot of learnings were taken after going 2-1. They did showcase good gameplay, but there is a lot more to be desired from them, so a challenge towards the title can be fabricated.

Following Fnatic’s loss against Excel Esports, in the second gameday from the opening week, the coach of the team – Jakob “YamatoCannon” Mebdi joined Jaxon for a post-game interview.

Happy to have you back for another split! How do you feel after the first two games of Fnatic?

YamatoCannon: In terms of quality, from our end, both games were rather similar. I think the level of opposition was vastly different.

I think Excel looks like the sharpest team in the league currently. We opened ourselves for potential mistakes in the Rogue game too, but I also think Rogue didn’t play so well.

Currently, we have a lot to work on and that’s fine. It’s just the first superweek and it’s a question of what the culture is and what the mindset is in terms of attacking some of the macro ideas we have, and some of the mistakes we make.

Win or lose, the level of play remains the same. For me, it’s just to see what we have to build on and this weekend was about trying to perform as well as we can. Then, find holes in our play that we can build on, of course.

What can you say about blind picking LeBlanc in the game against Excel? Was Humanoid just confident to play the champion or was it something you have had prepared?

YamatoCannon: LeBlanc is a Humanoid classic. The enemy team had some champs where LeBlanc can find some good damage. They had some squishy targets on the enemy team and that’s it.

It isn’t much more complicated than that. Anything that is tanky will be killed by Gwen and Xin Zhao if the game goes right, and it didn’t work out this time.

I saw your podcast for the LEC. You talked about how the practice was not optimal in the last split. Can you tell me if you see any differences in this split regarding the preparation?

YamatoCannon:  I’m working with very experienced professionals. I think after a split of gathering information, we can tune our expectations and efforts in the right manner.

I think in Spring, we didn’t succeed because we didn’t try. We just didn’t try in the same direction and in a manner that brings us together. This is a big focus of ours with the adjustments we’ve done to the staff.

I had to also find myself again. I didn’t feel like I was personally that effective in Spring. Coming into summer, it was a question of reflecting and making sure that we utilize the information that was granted to us.

Talking about relationships, how was the offseason for you? Did you have a nice break and also why did you guys decide to stay in Europe, unlike other teams that went to Korea for a bootcamp?

YamatoCannon: We stayed in Europe. On our end, I think a lot of the things that we needed to tackle were things that can be resolved in Berlin. We have a good facility and we needed to take extra time to make sure that we start on the right rhythms coming into the Summer split.

I think it would be good to try and figure out the patch in Korea, but at the same time the patch changes, the durability changes, and all of a sudden you need to rehash yourself.

For some teams, it makes a lot of sense to go to Korea. Like XL, they went to Korea and it makes sense.

For example, in Spring split, they changed a player mid-split. They brought in Mikyx and another coach. They didn’t have the result that they wanted and I think there was still that sentiment of growth in that team.

A team of players that didn’t have exposure to Korea can be very notorious and healthy for them. In that context that makes sense from what I know from the outside.

On our end, it made sense to stay on the ground and focus on the day-to-day issues.

Talking about the new facility, it was also mentioned that it has more of a traditional sports environment there. How would you say the players are finding it?

YamatoCannon: My views are in a very simple way, I think where you work is a question of access and during the summer also air conditioning.

The offices are a bit too dark for my taste, but that’s all right. It looks cool on camera, I guess.

We have everything that we need, we have a fully equipped kitchen, we have a gym and a lot of leisure areas. Everything that I need in terms of access is right there, and that’s the only thing I care about.

In the previous office, there was no AC, we paid a lot of money too.

I don’t know which wizard convinced all of the teams to move in Charlottenburg, to pay so much money for these offices, but whoever did it – This is the wolf of Berlin. He made some insane deals.

“In the end it’s in our hands to make it work. Anything but ending on top of the league would be a failure on my side. I will do everything in my power to make sure that we win.”

Talking about the other teams, do you think there will be a set Top 4 in the league or it might be closer than we expect?

YamatoCannon: Considering the chaos that comes with the patch, I think it would take a couple of weeks to settle. I think naturally, some teams will have an edge.

XL is coming in with a lot of momentum and they are definitely a team to look out for.

In terms of the context of last split, I think Rogue and Misfits are going to place lower.

MAD Lions as well, if they get a good start and build confidence again, they have potential.

Looking at the players I have, I feel the same as I did in the last split. In the end it’s in our hands to make it work. Anything but ending on top of the league would be a failure on my side. I will do everything in my power to make sure that we win.

We have some good opposition. G2 and XL are really strong teams and those two teams are the ones to really look out for. When it comes to Vitality, I think it’s a question of how their jungle situation is going to develop and whether that is good enough to modernize the way they play because I feel in Spring was very outdated.

What is your personal goal as a coach of this split? What would you like to achieve with your players?

YamatoCannon: I would be very happy if we walk away with good pleasant memories and relationships that last longer than the span of a professional relationship.

That’s usually a sign of cultural success in a team. I want to walk away knowing that everyone did their best and everyone committed to the same idea, identity, and team values.