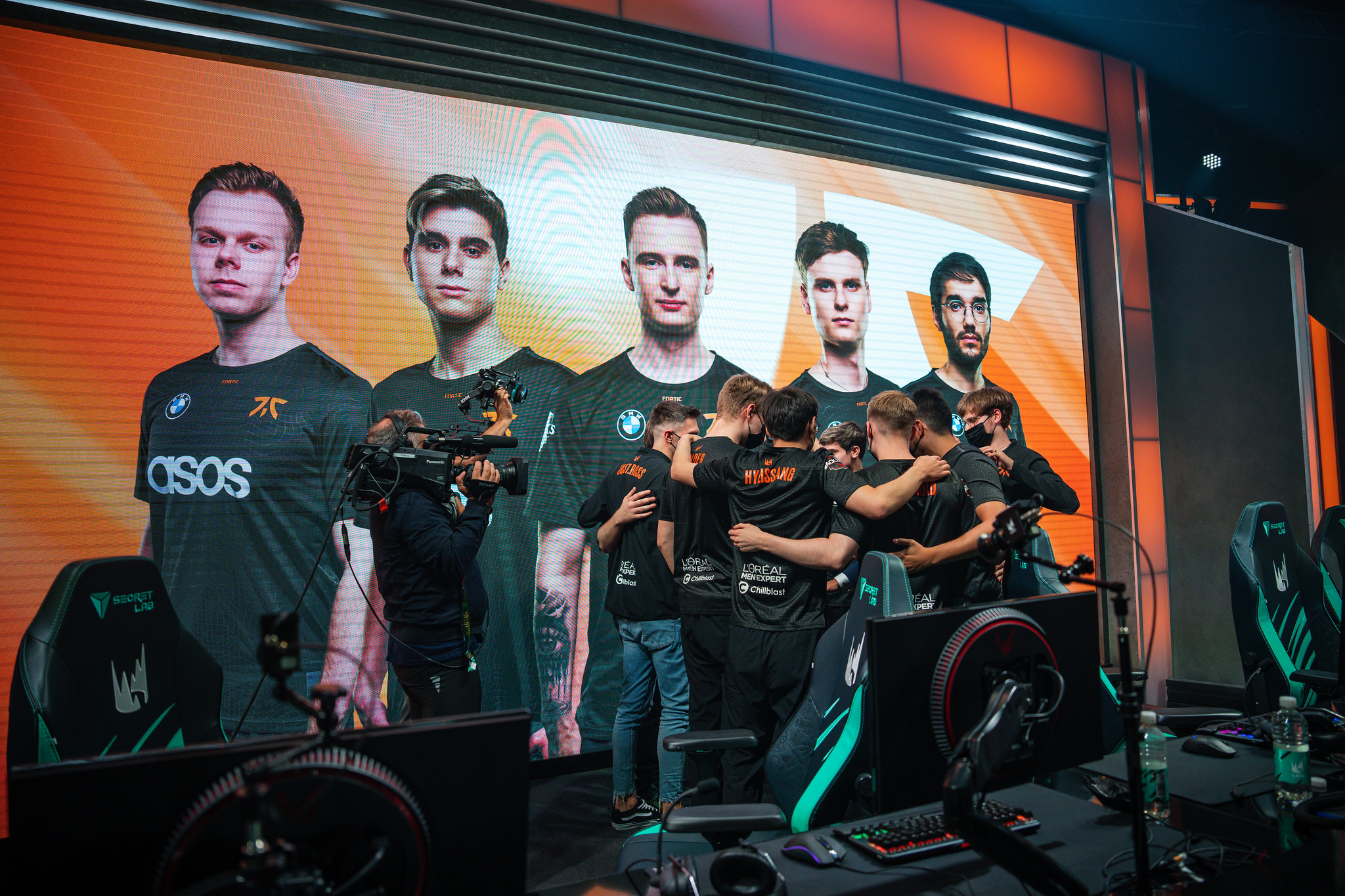 Fnatic defeated Excel 3-2 in a banger lower bracket first-round match of the 2022 LEC Summer split playoffs. While Excel’s Worlds dream came to an end, Fnatic will face off against Misfits next weekend for the fourth and final Worlds spot.

Even though Excel won the two initial games of the best of five, Fnatic managed to crawl back and complete a reverse sweep. The series was marked by various “INTeresting” draft decisions, especially from Fnatic.

As many people would’ve predicted, this series was very much centered around bot lane. Both teams throughout the series heavily prioritized ADC and support champions. Fnatic banned Draven and Kalista every game, while Excel stuck to Zeri and Azir bans.

Since Excel banned Sivir in game 1 as well, Fnatic decided to opt into the Lucian-Nami combo. Excel responded with Nilah and Yuumi, who never got punished and eventually completely took over the game.

In Game 2, Fnatic chose the blue side again, and instead of banning Yuumi, they banned Nilah. To everyone’s surprise, Fnatic didn’t even first pick it and opted into another Lucian-Nami game. Excel gladly picked “the cat” again, but this time with Sivir, who rolled over the game.

Finally in game three, Fnatic first picked Yuumi to pair up with Twitch. It was their only choice since all other meta options were banned, and Excel took Sivir-Lulu in their first rotation.

Despite dying level one, Sivir got massively ahead, and Excel was on the verge of knocking Fnatic. They were 7.5 thousand gold ahead at 30 minutes with a Baron buff in their back pocket.

However, heroics from Iván “Razork” Martín Díaz and Marek “Humanoid” Brázda somehow brought the game back in Fnatic’s favor. Although Elias “Upset” Lipp almost threw everything out the window by getting caught in the mid lane, Excel couldn’t finish the game in time, and Fnatic survived game 3.

The fine line between genius and insanity

You would think Fnatic would have learned their lesson and banned Yuumi, right? Nope, they left it open again.

They also brought back Lucian and Nami, which clearly didn’t work out in the first two games. Completely crazy, isn’t it?

Yes, it is, but it worked out this time around. Fnatic had the momentum, and Excel started playing a bit more sloppy.

Humanoid finally stepped up and played a very good back end of the series on Sylas, while Razork earned himself a series MVP with his Poppy and Trundle performances.

Despite logic and community outrage on Twitter and Reddit, Fnatic stuck to their strategy even though it didn’t work twice.

They managed to pull off the reverse sweep and deserve all the credit, but it raises the question of their drafts going forward.

With this victory, Fnatic’s turmoil year continues, with only Misfits standing between them and Worlds 2022. Despite stealing today’s series vs. Excel by the skin of their teeth, Fnatic goes into the Misfits matchup as clear favorites, as many agree that Excel was the team to beat.

Can they deliver? It remains to be seen.

Although they failed to reach the ultimate goal of making Worlds, Excel can be happy and proud with their 2022 LEC campaign.

From a team that couldn’t reach the playoffs to a solid and respectable opponent to everybody in the league.

They are heading in the right direction, and if they can keep improving, they might be a serious challenger in 2023.

The project centered around their young jungler Mark “Markoon” van Woensel is slowly but surely paying off, and we’re excited to see what the future brings for Excel.

Can “the battle bunnies” leave LEC with a bang and go to Worlds in their last dance, or will Fnatic’s struggling superteam live to see another day?

The ultimate “plot armor” match for the final Worlds spot is scheduled for Friday, September 2nd, and you don’t want to miss it.