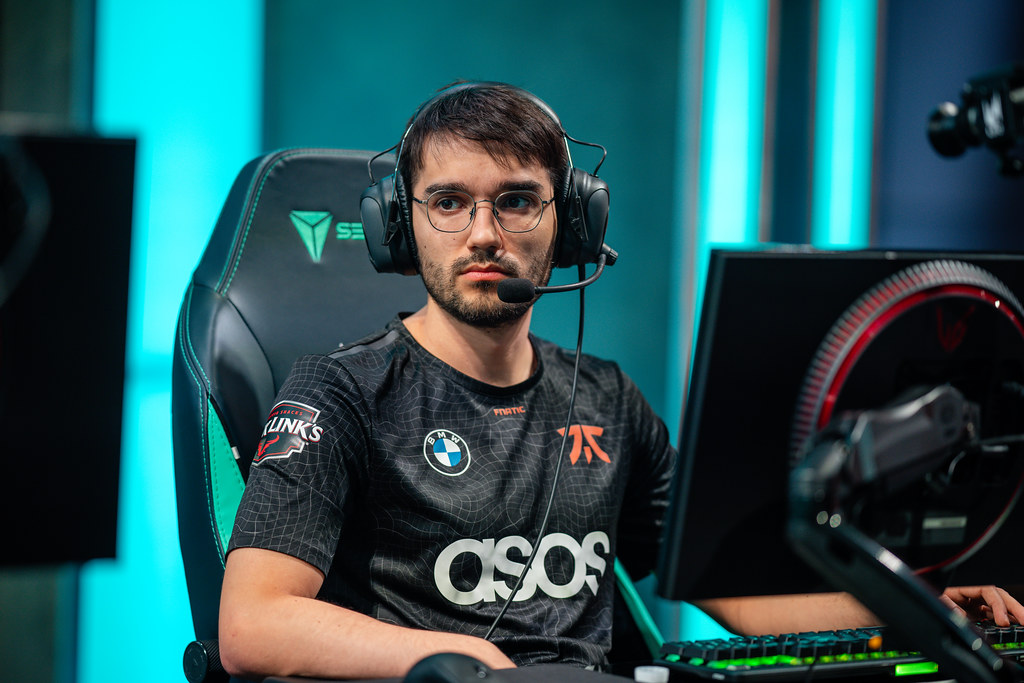 Playoffs no longer a miracle for Fnatic

Despite struggling in the 2022 LEC Summer Split, Fnatic made an important step towards securing their playoffs spot. Both Astralis and Fnatic had an even record (7-8) and faced off in the super week, where the winner’s percentage of qualifying would sky-rocket.

Fnatic is yet to secure their place in the playoffs, but their chances have increased from 30.5% prior to the super week to 67.19% after the first game.

Following their victory against Astralis, the support of the team – Zdravets “Hylissang” Iliev Galabov joined Jaxon for a post-game interview, to discuss the team’s struggles during the split and more.

Yohan: First of all, congratulations on the win! You guys had a really nice performance and your chances of making the playoffs have increased by a lot. How are you feeling after beating Astralis, who are actually a direct opponent for the playoffs spot?

Yohan: Today’s game also had a lot of stakes on it. How was the mood before the game, knowing it could be your last chance of making the playoffs?

Hylissang: Honestly, the mood wasn’t any different than usual. I felt like we were not really stressed. We were still making jokes and didn’t really feel much different than the other day.

Yohan: And during the game? Did you feel any pressure? It was even in the beginning, but then you took off and snowballed the game. Razork also gave a great performance.

Hylissang: There was pressure for sure since I was playing Nami and this champion can die if you close your eyes at the wrong time. I felt a bit stressed, not because of the stakes, but because we were playing Lucian Nami and my champion relies a lot on other people to do the job and have good positioning.

I was trying not to int my positioning too much and help my teammates to disengage when needed. I think the lane went well. We based on good items, we took dragons.

Some team fights were not the best, but as you said, Razork played well. He blocked the Rakan a lot and had good ultimates, which helped us big time.

Yohan: This is definitely not the split that we all expected from Fnatic. What would you say were your biggest struggles, which put you in the position that you are in now?

Hylissang: I can agree that the split hasn’t been what everyone expected, not even us. The biggest trouble is that we are not on the same page. We often don’t see the game from the same angle and we are in different places than we should be.

The differing opinions of how the game should be played is what cost us the wins. We are just not on the same page and it really slows down the game and causes us to lose focus.

We are working on it and I think this game was something that was way better than other games. You could see that we are always fighting together, doing the same thing. Even if we’re cross-mapping or like our top-laner always plays with the mindset that he’s alone on an island and he’s not trading too much.

It’s the same when the jungle is ganking top, for example, we play accordingly and our mid is in the right spot, always. It feels much better if we are on the same page.

Yohan: And do you think the practice has been getting way better in the past week?

Hylissang: The practice has always been a bit shaky in our team since most of us are stage players rather than scrim players, but we have been trying our best to work on these things and I think we’ve been progressing as well.

Yohan: What would you say about the meta read then? For example, Gragas is a champion that fell in the meta, but Fnatic did stick to it. Do you think you have ignored the meta and went for comfort picks most of the time, which cost you some games?

Hylissang: I wouldn’t say that Gragas top is unplayable or anything. If Wunder says that this could be a good Gragas game and he thinks it, we believe him. This is our meta, it doesn’t matter who’s meta it is. For us, Gragas is a meta and other champions as well.

We don’t really care too much about the meta. If we believe that this champion is strong and the player thinks the same as well then, we’ll just pick it. It doesn’t really hurt us, it’s good for us.

Meta is also opinionated, you know. I can blind pike and I feel good about it. So, this is my meta but other people don’t feel comfortable about this, you know?

Yohan: Let’s say you make it to the playoffs. Should we expect a different Fnatic there? Do you think you would be way better in the bo5’s compared to the bo1’s?

Hylissang: Hard question. I am not sure, honestly. I think bo1’s are very flippy and for bo5’s you need to have a strong mental fortitude. You need to be adaptive to a big champion pool and to be very positive, even when things are not going your way.

Hylissang: For sure. I do like bo5’s more but I don’t know how it’s going to be. I feel comfortable about it if we make it to the playoffs, but first, we need to get there and that’s the hard part.

Yohan: As someone with a lot of experience, I imagine it’s really hard for you to feel the pressure. However, do you think it could have somehow gotten to you this split due to the super team status? Did that affect you in any way?

Hylissang: I don’t think so. At least for me, I don’t really care about pressure from outside the team. I don’t care if they think I’m bad, but what’s more important is what my teammates think and how we treat each other.

If we feel good about ourselves, we play well and if everything is going well, then I feel very comfortable. If we’re not really talking to each other and not playing very well, then of course I feel worse. Other than that, I don’t really get pressured by what people think. Whether we’re a super team or not, I never really cared too much about it.

Yohan: What would you say is the biggest difference between Fnatic in Spring and Fnatic in Summer split?

Yohan: If you could reflect on something and change it from the beginning of the split, what would that be and why? It could be anything.

Hylissang: Maybe being less focused on bad things because I feel we got into this phase that we focus too much on what we’re doing wrong, that we forget a lot of the good things which we’re doing. When somebody makes a mistake, we go over it all the time and we bash the person or the player that we should not do that.

I would like to try to focus more on what we’re doing right. Mistakes will always happen. We just need to treat them differently. It’s there, we are working on it, but we shouldn’t be tunnelling on it.

It’s ok to make mistakes, we shouldn’t dig into it and try to feel bad or make somebody else feel bad about it. Whatever happens, just keep playing and try to win.

If you focus on some things, you see only them and ignore everything else. I think it’s a trap that many players fall into. It’s a very common mistake.