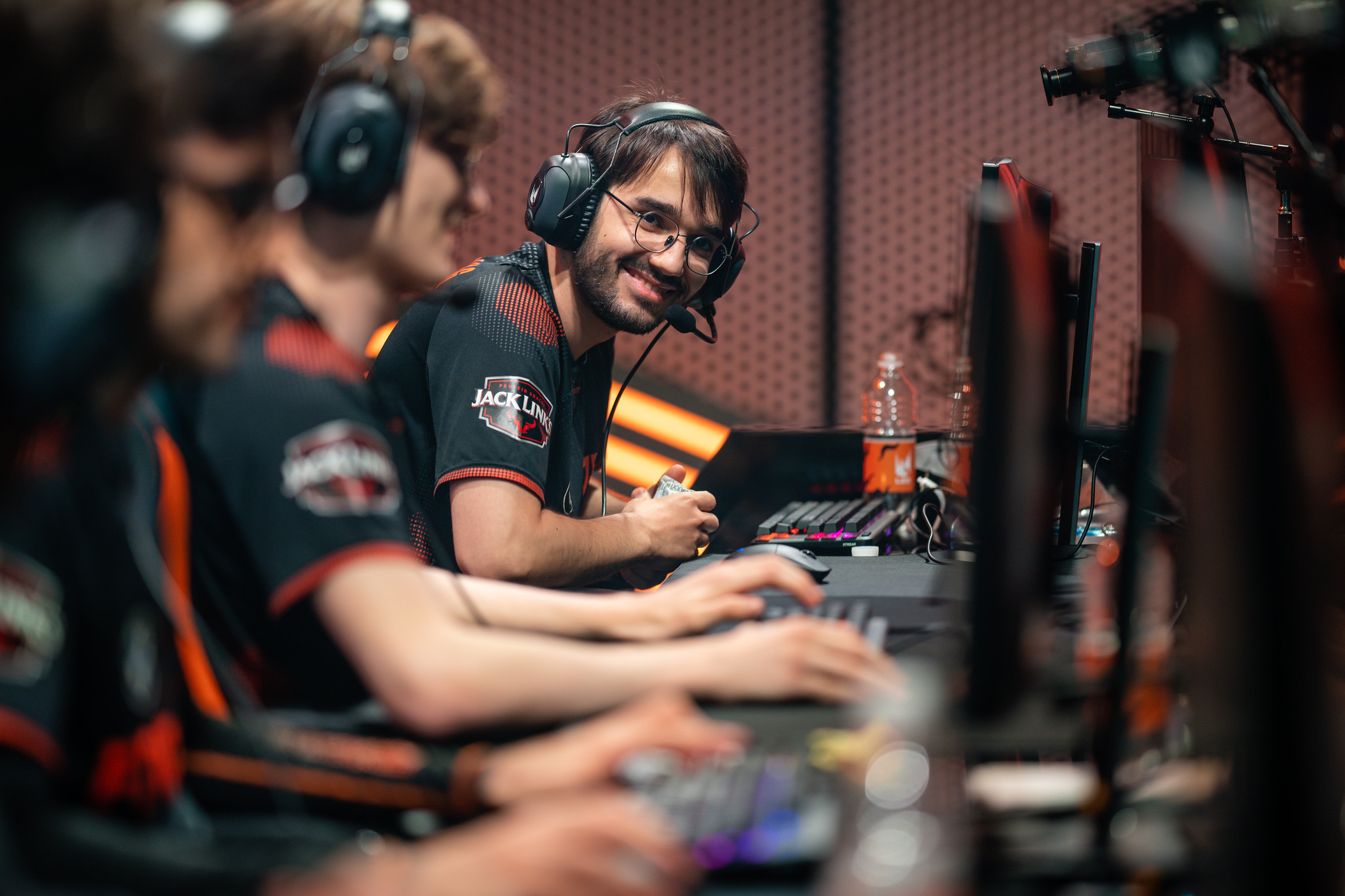 Fnatic Hylissang on his bond with Bwipo: “I always understand him […] and he sees the game very similarly.”

Fnatic defeated Misfits in a closely contested 3-2 and secured their spot in a do-or-die matchup against G2 Esports. The winner will advance to the World Championship, and the loser will watch from home.

Ahead of the matchup, Yohan “Esports_Person” Markov spoke to Fnatic’s support, Zdravets “Hylissang” Iliev Galabov, about what went on against Misfits, the bond he shares with jungler Gabriël “Bwipo” Rau, how G2 changed since 2020, and more.

Below is a transcription of their conversation slightly edited for clarity.

Could you please share with me what was the atmosphere of the team before the last game in such a high-pressure moment?

The atmosphere in the team was quite good, I think. At least from my point of view, I was a bit frustrated because I could have helped by stopping the Gnar a bit better, and I think Bwipo could have done a bit better in this situation and maybe we could have won.

That's why [I was] a bit frustrated after the game, but I was very proud of my team because we were having such a rough game that we bounced back multiple times and we almost won the game when it was kind of unwinnable, from draft and from what happened throughout the series.

Except this, I think we kept our cool and we performed and stayed calm and cool for the next game.

As a veteran, how do you feel about those high-pressure moment, as you have experienced a lot of those moments, for example against G2 and TES. What is your preparation before those moments?

I am usually very confident, and I have been in this situation multiple times as you said. And experience is just making me more confident when it comes to this Game 5 situations.

In the other games, you guys were drafting more heavy skirmish compositions, but in this game, you opted to more scaling, what was the reason to change the whole draft in that Game 5?

It's the side that we chose, obviously red side is more counter-pickable. They picked Thresh first pick, so we wanted to counter it and then we have the 3rd pick + two bans. That's why we went with this draft and yeah not much else to say.

I think they had this ban so we had to answer with our strategy that we used to practice in scrims and we liked. That's why I think we played it out this way.

And happily, the Morgana finally worked...

Jokes aside, I think, Nisqy just played phenomenally. Honestly everyone played pretty good for the situation we were in.

We got very outtraded in level 1 bot lane trades, and they invaded our blue buff, and the games was rough for bot and jungle. But finally, our mid and top carried really hard, and I was very happily surprised. Only good things to say.

There were a lot of pauses during Game 4, right? Usually pauses affect teams in different ways, so considering your experience with it, how did it affect your focus, what steps do you usually take to recover focus?

Honestly, we were kind of memeing in the game but, of course, pauses affect both teams and maybe we have a small edge *laughs.* Because bugs happen to us, and we are willing to pause in the game, and discuss them with referees and see if it's a bug or not. In this scenario, it was.

I mean, in my opinion it was a bug, but in their opinion it wasn't. We couldn't do anything about it, and we just played it, then it happened again. And then I learned something about Ryze that is actually very crucial. It's a very small thing but I don't know if its replicable or it was bug.

So the game lets me stay in the place where I am, instead of teleporting, even though I am in the Ryze ult, which doesn't make any sense. But that's why I paused, because it was crucial if I am not in front of my team with Braum and Locket. It's much different than if I am behind my team, but I think it affects both teams in the same way.

I was actually very frustrated, because it happened again, and this time maybe we lose the game on the spot, if I was not where I wanted to be.

Other than that, we stay focused, because we have a clear communication, and whoever has better awareness of what was happening before the pause, and has better memory, obviously will have a better opening in the game.

Maybe we even got some picks up of the pause, but I wouldn't say it was like anything that they couldn't think about, or they wouldn't think if there was no pause.

There were some discussions on twitter that it kills the momentum for them but on this high level I suppose it's different. I think you as professionals are concentrated and it actually doesn't matter that much.

Yeah, it kills momentum. The momentum is killed because of the pause, but [if] you can continue with your momentum, the game is at the same spot that it left. It was not a chrono break, that it would kill momentum I would say, but it was just for both teams the same cut of the game and the same start of the game.

If they are calmer after the pause and they are not saying as much, it's on them, it's not on the pause.

I don't know if you remember all the games, but I want to go to Game 2, which was a bit unfortunate for you guys. You had a lot of early lead, but eventually you lost the game. Can you tell what you think were the mistakes that led to that? Honestly, I thought it was over at the beginning.

First of all, we agreed to play the same draft. But in reality, I think after watching and playing the game, maybe the draft is quite favorable for them. I think that's the first mistake, that we believed that we have the good draft.

But in reality, I think we didn't, and there is nothing to say to Yamato or anything. It's just that we all believed, we drafted these champs, and we believed in them. But after playing the second, kind of a redraft of the same things, it felt like it was quite hard to play the game.

That was the first mistake and that's why we made follow-up mistakes because we were ahead in the lead, but we had hard time snowballing. We fought 2v2 bot I believe, and we got some summoners, but then, we overcommitted, and we died. I moved to mid, and we killed them, but their bot lane was able to play the game, even though they had no summoners and that was also abusable.

But I think we just picked bad fights, bad time, and circumstances were not great. They just got back in the game, and when they get back in the game with this draft, against ours when we don't have much engage, it's quite hard to find the pick

Did this loss actually activate you in game 3? Because you guys just stomped then, and it wasn't even close.

I mean, honestly, I felt like whenever I got Rakan, there was a mistake already in draft again, so I felt quite comfortable on this pick, and I had a lot of control in the game because of how Rakan works.

I was very happy, but we need to be better as a team when our champs are getting banned. When bot lane is getting target banned, we need to have value somewhere else. Like in Game 5 where we had a TF that was a power pick, and it worked out for us, we can do for sure a better job.

You and Bwipo are one BO5 away from Worlds, and this is with him playing on a different position now. Could you tell me how the partnership between you guys began and how it evolved?

From the beginning? From when he was a substitute? Honestly *laughs* ok...

He was this shy guy back then, when he came to Fnatic and he was playing just solo queue in the corner of the room we had. He was just playing his solo queue we were playing our scrims.

Then, eventually something happened, and he had to take over the top lane spot or play a few games, because sOAZ wanted him to see how it is to play on stage. He just wanted to give him a chance, and I liked him a lot as a person, so I was just talking to him, and we had a bond from the beginning.

Later, when he actually started playing for Fnatic, it was just enjoyable because the way he sees the game is so nice and so similar to me—everything that he does makes sense to me. I always understand him, and I can always share my opinion toward him, and he sees the game very similarly.

We just have a very easy time working together, also spending time outside of the game as well. We are good friends, and it’s very nice. He is quite passionate and has a good sense of humor.

It's hard to not have a bond with Bwipo because of the person he is. He is also a great player. And now, the fact that he is playing jungle makes it so much easier for me. We also played bot lane for 1 split together, so I have very easy time working with him.

Now talking about Worlds, you are one BO5 away and you will face G2. We won’t get a FNC vs G2 final this time, and I wanted to ask you if you feel the same way playing against G2 as before when you guys were meeting all the times in the finals.

Question is interesting, but I can answer it very simply. The G2 that is right now, is way different that the G2 was with Perkz for example. Caps and Perkz were a very strong duo, and they are this type of player that are always hungry and always want to fight back. And no matter how far you are ahead, you know that you can still lose the game.

G2 right now is a bit [calmer] and tries to play by the book and not take risks. Obviously, Rekkles joined, and it's part of his playstyle that he is bringing to G2, and I think its way different. It’s just completely different playstyle that they are having.