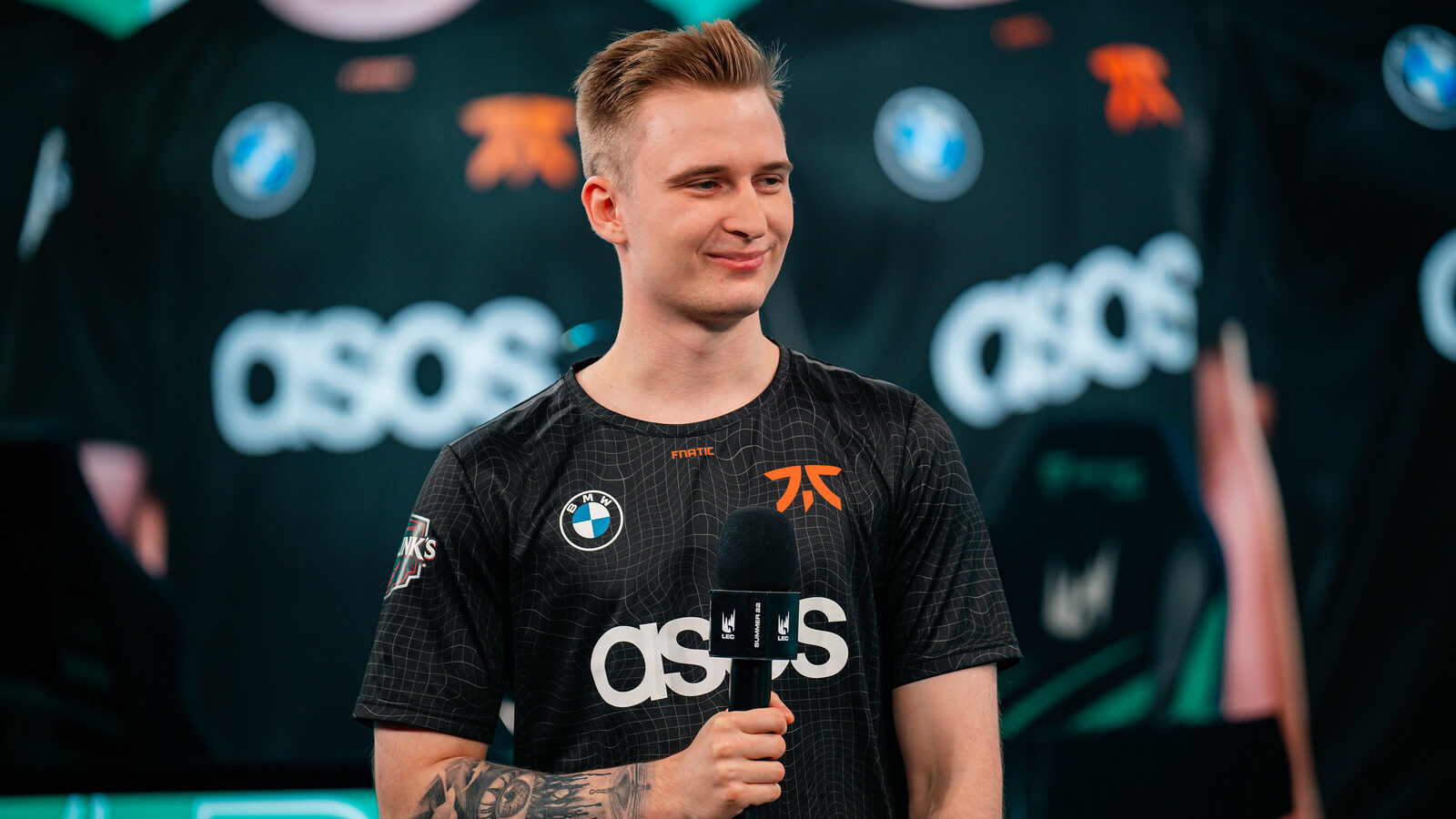 Fnatic and Marek “Humanoid” Brázda continue their lower bracket domination after eliminating MAD Lions from the 2022 LEC summer playoffs. Despite missing out on the top 4 in the regular split, and starting from the lower bracket in the playoffs, the team secured their place in the 2022 LEC summer finals in Malmö, and already eliminated three teams from the playoffs: Excel Esports, Misfits Gaming, and MAD Lions.

In a recent interview with Jaxon, Wunder shared his thoughts on Fnatic’s goals and how Worlds remains a main focus for the organization. Now that the team has already qualified for the competition, they will have their eyes set on the prize in the LEC. Also, a win against Rogue would secure Fnatic a place in the Worlds 2022 Groups stage.

Yohan: Congratulations on the win against your former team (MAD Lions). First of all, how are you feeling after the series?

Humanoid: On one hand, it feels really good to win against my old team, but it also feels bad that I had to knock them out, which means I won’t be able to see them in the finals.

Yohan: You were looking for this clash for a long time, right?

Humanoid: For sure, it’s a lot of fun to play against my former teammates.

Yohan: Many people were expecting a much closer series, but you had an insane start with a 20-minute victory. Why do you think MAD Lions started slow in the series? Were they not prepared, or what happened?

Humanoid: I think in the first game, they had a really unlucky early game start. The game was over at five-six minutes, and there was not much for them to do after that. Same in the second game, but on the opposite side. It was them stomping us. Then the next two games were kind of even.

I don’t think they had a slow start, it was just a lack of luck. If you have an unlucky early game, where you die three times, it’s just over and there is nothing you can do.

Yohan: I would imagine you guys prepared more for Misfits, as the game was more important regarding Worlds. How was the preparation for MAD Lions?

Humanoid: I think we prepared the starts things for both teams. I don’t think the two teams (Misfits & MAD Lions) played the game that differently. We stuck to playing what we know and we prepared for both teams equally.

Yohan: What do you think was the difference maker in the series against MAD? What made you win?

Humanoid: I think we were very good at diving bot lane. They didn’t really have much of an answer to that. We dove them every single game, level three. That’s probably the main difference from today.

Yohan: After starting 5-2 in the LEC, you had a rough mid-split. You were losing a lot of games and it came down to the last game whether you will make the playoffs. Why do you think there were struggles in the regular season? Why was there a drop in form?

Humanoid: I am not sure. I think we played really badly in the middle of the split. I have no idea why. It took us a while to get back, but after the 4-5 games losing streak, we started playing better than we ever were. Even compared to the start of the split. It was probably a good thing that we started losing.

Yohan: And what about you? You did have struggles throughout the split but in the playoffs, you are a different player. How would you reflect on your personal performances so far?

Humanoid: I think I didn’t play that well in the regular split. But towards the end, I started playing really well and I am much more confident now. It’s better to play well towards playoffs rather than at the start of the split.

Some players play well in the regular season and then int in the playoffs. I’m happy that I’m not one of them.

Yohan: This week you have played really well. It also looks way better compared to your games against XL. How can a team improve so much in just a week? Do you think it was because of your opponents or you finally have the winning recipe?

Humanoid: I don’t think we were playing much better than against XL. I think they (XL) played really well against us and they were close to actually beating us. But also, a lot of the games are really close. Even today, it could have easily been 3-2, which would be comparable to the series against XL.

I wouldn’t say that there was too much of a difference between this and the previous week’s gameplay.

Yohan: Now there are five days until Malmo. Do you think anything can change in that time?

Humanoid: Usually, I don’t think in five games you would completely improve on everything and just be millions of times better than you were last week. It’s probably going to stay around a similar level.

Yohan: As we mentioned, you already qualified for the LEC finals in Malmo. How do you feel to play in front of thousands of people again after three years?

Yohan: Does it also make you more hyped to perform?

Humanoid: For sure, I love playing in big arenas and I am really excited.

Yohan: Next you will be taking on Rogue in Malmo for a spot in the finals. Can you give me a small prediction and what should we expect from those series?

Humanoid: Rogue isn’t looking that great right now, we should be able to beat them. Maybe 3-1, 3-0 or maybe even 3-2. Who knows about the result, but we are going to win. That’s my prediction.

Humanoid: We are looking to play G2 for sure. It will be a clean 3-0, no chance for them.

We would like to thank Humanoid for taking the time to share his opinion in an interview with Jaxon. As for Fnatic, they will be taking upon Rogue in Malmö on Saturday Sept 9 starting 17:00 CET / 8 a.m. PST / 11 a.m. EST. The winner of the clash will face G2 Esports in the 2022 LEC summer finals on LoL Esports.