Professional Fortnite remains one of the more toxic environments in all of gaming – partially because of the low barrier to entry that it has.

Unlike most other games, pretty much anyone can be a Fortnite pro if they have the skill. You don’t need to be noticed by an organization – you can enter and win a tournament if you’re good enough.

Recently, Twitter user @CatGamerOP released a Google Doc that appeared to show an Epic Games admin-connected user getting players banned so that popular pros could qualify.

They, reportedly, did this for money. According to the screenshots in the document, they also unbanned players for money. 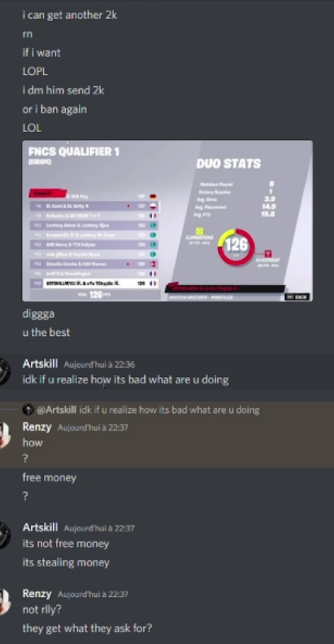 The 63-page Google Doc shows Renzy – the person initiating the bans/unbans – discussing such transactions with Fortnite pros large and small. Names like Rexon, Chapix, Malibuca, and more are all implicated in the scheme.

For their part, Epic Games have flatly denied the allegations – citing an internal investigation.

The response came as a surprise to a lot of the Fortnite community. BallaTW, a former Fortnite caster, posed the question: “Why is the official comp account responding to a random Twitlonger?”

CatGamerOP continues to tweet screenshots from the Google doc, along with DMs he’s received from some of the pros shown in said doc.

The messages are pretty damning, but Epic Games took a hard stance – suggesting that they know the allegations are false.

...I have no idea what to make of this. It seems sketchy, but why would Epic Games issue a response? Idk. Professional Fortnite is a dumpster fire that just keeps on burning.