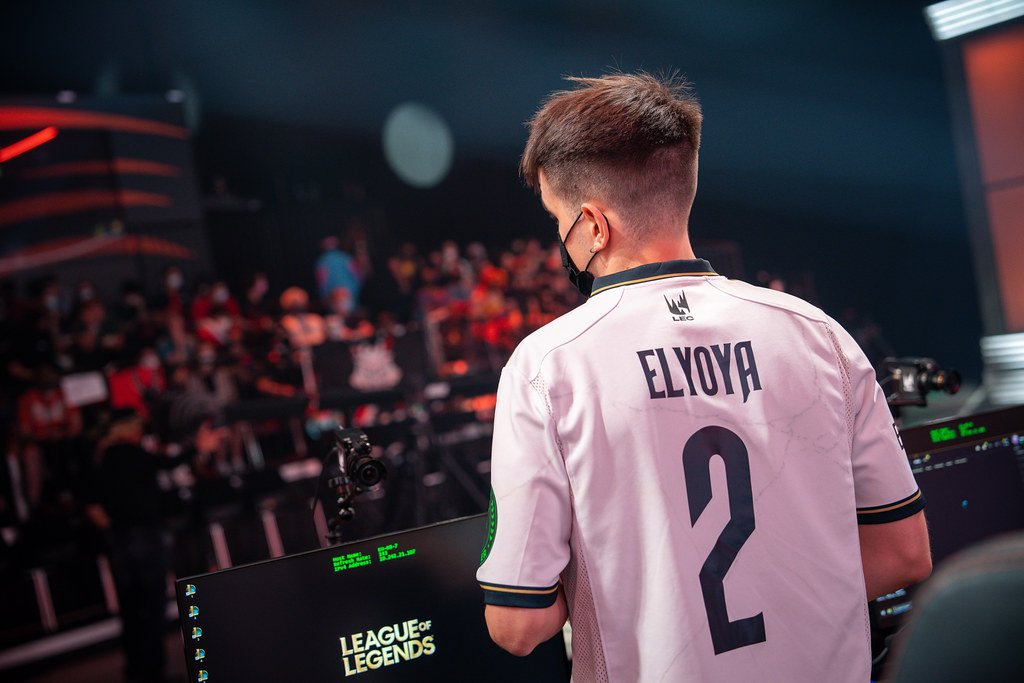 After a disastrous Spring split, Elyoya and MAD Lions are back at the top of the LEC, qualifying for the playoffs and the upper bracket.

In one of the most competitive splits up-to-date, the team managed to crawl their way back to the top, snatching a 2-1 record in the last “super week” of the competition.

The addition of Yasin “Nisqy” Dinçer to the team proved vital, as it transformed them from a non-playoff team to a title contender. With a 12-6 record in the 2022 LEC summer split, MAD Lions finished second overall and will be facing Rogue in the first round of the playoffs.

Following their last win of the regular split against Team BDS, Javier “Elyoya” Prades Batalla joined Jaxon for a post-game interview to talk about his personal challenges this split, as well as MAD Lions’ 180 degrees turn.

Yohan: It’s been a long split! Congratulations on locking top 2 and qualifying for the upper bracket in the playoffs. How are you feeling now that the regular split is over?

Elyoya: I’m feeling good since we made top two in regular season and we also locked top four in playoffs after a pretty disaster spring split. I also feel a bit sour because I think the games that we had the past few weeks were not as good as we wanted.

So, it’s a bit of a mixture. I’m happy because we secured the top two, but at the same time, I’m not happy with the final performance we showed this weekend compared to previous ones.

Yohan: We all noticed there was a drop in performance, why do you think it happened?

Elyoya: I think we didn’t adapt well to this patch and it took us some time to actually figure out what we wanted to play. I would say that mostly the adaptation of the patch was not good. It caused a lot of indecisiveness in us which hurt our gameplay.

Yohan: Do you think this drop in form could somehow affect your chances in the playoffs? And was it better to happen now, so you can learn from it?

Elyoya: Yeah, I think it’s way better for it to happen now and hopefully the situation can change. The patch is for sure going to change, so we can adapt better to the next one. We have a lot of time and yes, I am happy that it happened now and I’m also hopeful that it will not happen in the playoffs.

Yohan: It has been quite the difference between the spring and summer split. You missed the playoffs, now you are back in the top 2. Was the spring split down-to-earth experience that made you hungrier to compete for the title again?

Elyoya:  Yes, 100%. Losing in the spring split and not even making the playoffs felt bad. I felt disappointed in myself and wanted to prove again that we are capable of being at the top of the LEC. I was hungry to win again.

Yohan: You were actually two out of two. Two playoffs – two titles. In spring you didn’t make it, but now it’s your third appearance in the playoffs. Is it going to be three out of three?

Elyoya: Of course (laughs). I didn’t lose a single bo5 in the LEC. I am still undefeated and that’s going to remain.

Yohan: You are also in the talks for the MVP of the split. How would you rate your personal performance this split?

Elyoya: I don’t think I should get awarded the MVP of the split even if I’m a candidate. At the beginning, I was much better but in the past few weeks my performance wasn’t as strong as intended.

Nisqy has played better these past few weeks and he is the one that should get it. I would be happy if he gets it because that would mean I am doing something right.

Yohan: Peopole are also talking about you as a duo, not only Nisqy. Do you think your synergy brought MAD Lions back to the top?

Elyoya: I believe so. The duo of me and Nisqy is one of the best in the league, if not the best right now. We fit each other well and we are both happy to be playing together.

Yohan: What would you say is your biggest individual learning from the split?

Elyoya: I would say that I’m still learning to deal with the emotions. That’s one of the hardest parts of being a pro player. It’s not a solo game and you need to play with a team that involves four more players.

Sometimes it gets hard dealing with more people and I would say I am learning how to deal with each of them individually since everyone is different.

Yohan: I remember you said in the past that you watch a lot of the other leagues such as LPL and LCK. Is it still a thing for you?

Elyoya: Yeah, it’s still happening. Every day I watch the daily games of LPL or a hype game of LCK. I pretty much have every Korean or Chinese jungler’s op.gg (account tracker website) tracked. I like to see what other people are doing or playing.

Yohan: What can we expect from MAD Lions in the playoffs?

Elyoya: Until now, MAD Lions have remained undefeated in the playoffs since last year, so we can expect that streak to continue until next year. That’s what I can say.