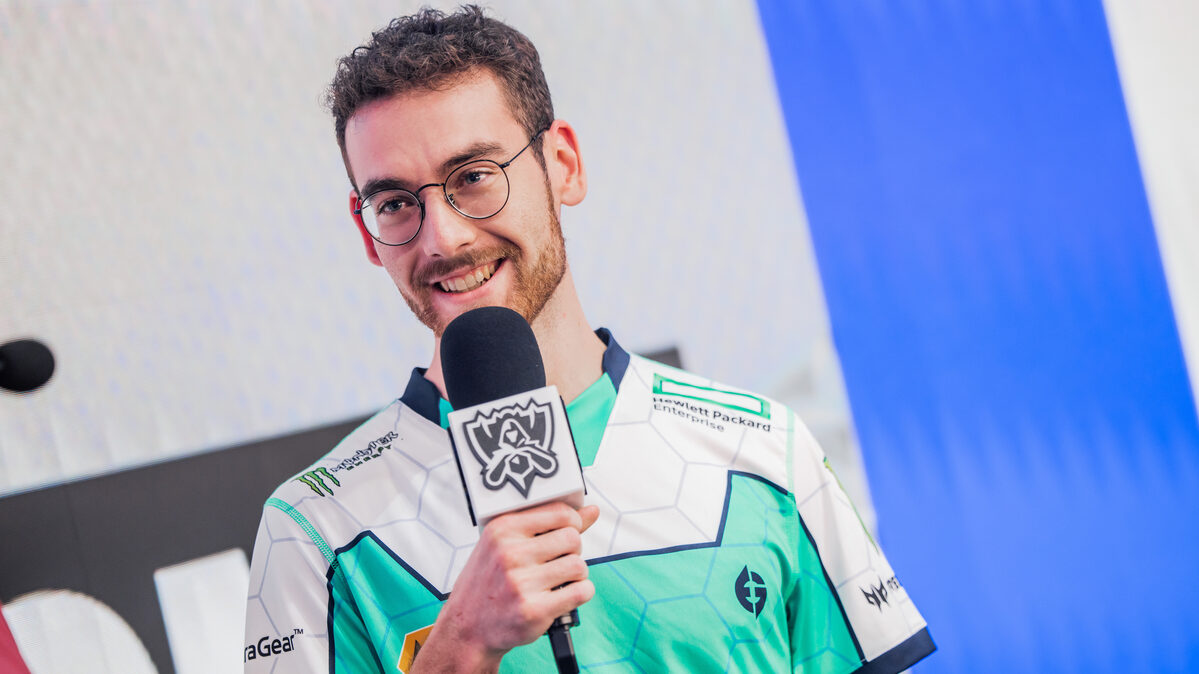 EG Vulcan: “We had low fps, but I am not sure if it’s the client being poorly optimized.”

Evil Geniuses and their support Philippe “Vulcan” Laflamme had a tough start to their Worlds 2022 Group stage participation. The teams lost their opening two games of Group B, and the chances of qualifying have taken a hit.

However, Vulcan remains optimistic about his team’s success and believes that the task is doable. Following EG’s loss to G2 Esports, the support of the team joined Jaxon for an interview, discussing the team’s chances at getting out of groups, the fps issues at Worlds 2022, and more.

A tough start for Evil Geniuses at Worlds 2022

Jaxon: It’s been a tough start for EG at Worlds 2022. What do you think went wrong in the first two games of the competition?

Vulcan: Both games were different. In the first game, we were in a favorable spot, and then we kind of became very chaotic in comms, and we didn’t do the proper steps to stabilize the game after the ace. We did a poor job of understanding what we needed to do so we could regain control.

It was pretty hectic, and we didn’t adapt to the situation. Then we started contesting mid, and the game got out of control.

Jaxon: There were still positives to take away, and against JDG, you were really close. How did the team feel after you missed out on the win?

Vulcan: We were all very mad. At ourselves, at each other, and at the game. We spend at least 3-4 hours talking about [the game] in the backroom at the venue. On our way back to the hotel, we were talking about it, and also, in the hotel room, we were still talking about the game.

There were a lot of learning points from that game. We were upset because it’s much harder when you feel that you should have won, especially against a strong team like JDG.

Jaxon: In 2021, you were in an even tougher spot at Worlds. You started 0-3 in groups and still made it to the quarters. How can you help your team turn it around based on that experience?

Vulcan: It’s definitely doable. We only have to win a few games and hope that some results go our way. We know what we should have done better and how we want to play in the next few games. Hopefully, we find a solid [basis] that we want to stick to and play that way throughout the remaining games.

Going to the next game, it depends on how you show up on the day, how your practice went and how much you were able to take out from the losses. Either we have a crazy miracle run, or we suck and we lose, and we were never going to win the tournament anyway.

A lot of game-related issues at Worlds 2022

Jaxon: In the game against JDG, Kanavi’s screen showed that he was playing the team fights with 90 FPS. Did you also have any issues throughout this game?

Vulcan: We had low fps [I assume], but I am not sure if it’s the client being poorly optimized. I’ve heard some people talk about that. It’s the same in the practice rooms, even at the EG facilities, with the PCs that we have. Sometimes, there will be terrible frames during team fights. I’m not sure what specifically the esports side of Riot can do about it because, to me, it feels like a consistent problem across the game.
I think the biggest issue is the headset quality. They said it was fixed, but I could still hear the crowd through my teammate’s microphone, and that shouldn’t be the case.

The microphone quality also feels off. When I’m on the LCS, the microphones sound much smoother and cleaner when my teammates are talking. There’s playback on the microphone as well, and when I say something, I can hear myself back. It sounds like it’s low quality.

The new partnership with Kaori

Jaxon: Danny was your bot lane partner for the whole year. Now, due to difficult circumstances, Kaori had to sub-in for the team. What can you tell me about your partnership with him so far and what type of a player he is?

Vulcan: He is a different player [compared to Danny]. He’ll be much more adamant in reviews and conversations about what he wants. Whereas Danny was going with the flow and trusting us that we would put him in a good spot.

Also, I think he is a stronger laner than Danny. But then, he [Danny] was a more reliable and consistent team fighter. That’s the kind of tradeoff that we got. Kaori is a good player, and he deserves a lot of props for jumping into this new environment, especially after the rough year that he’s had in the academy.

Jaxon: Reflecting on 2022, you had to play a lot of games. There was MSI, LCS, and now Worlds. Was there a moment when you could feel the burnout catching up to you?

Vulcan: Maybe now (laughs). During MSI as well, because we had to play the LCS finals in Houston. Then, we were supposed to fly back the day after finals, but our flights got delayed due to thunderstorms. I managed to get a flight late at night and arrive the day after.

The following day was off, and then we had to fly to Korea. That whole thing was crazy. We didn’t get any rest at all, and we had to travel all the time. I hope the schedule allows more rest in the future for the LCS winners.

After that, we got a fine number of breaks, but it wasn’t optimal. We got one week after MSI, one week before Worlds, and one week during LCS. We had some breaks, which was fine, but I’m feeling the strain of having such a long year.

Also, last year on C9, we went down the exact same path. MSI into summer playoffs and then Worlds Play-ins. Two very long years back-to-back, but I am doing good, all things considered.

Jaxon: How do you feel about your personal development throughout 2022 on your new team, and what have you learned this year that helped you improve as a player?

Vulcan: Mostly getting to work with different people. I was in a different environment, not only with my teammates but with the whole organization. Regarding my personal level, I am happy to be able to do my thing. Wherever I am, I try to bring as much as I can to my team.

It kind of sucks with the whole player change this late into the year. It’s harder to have personal development because I need to work on understanding Kaori and vice versa. It sucks that we don’t have a basis of matchups that we’ve played so many times and communication where we would understand each other if we said something.