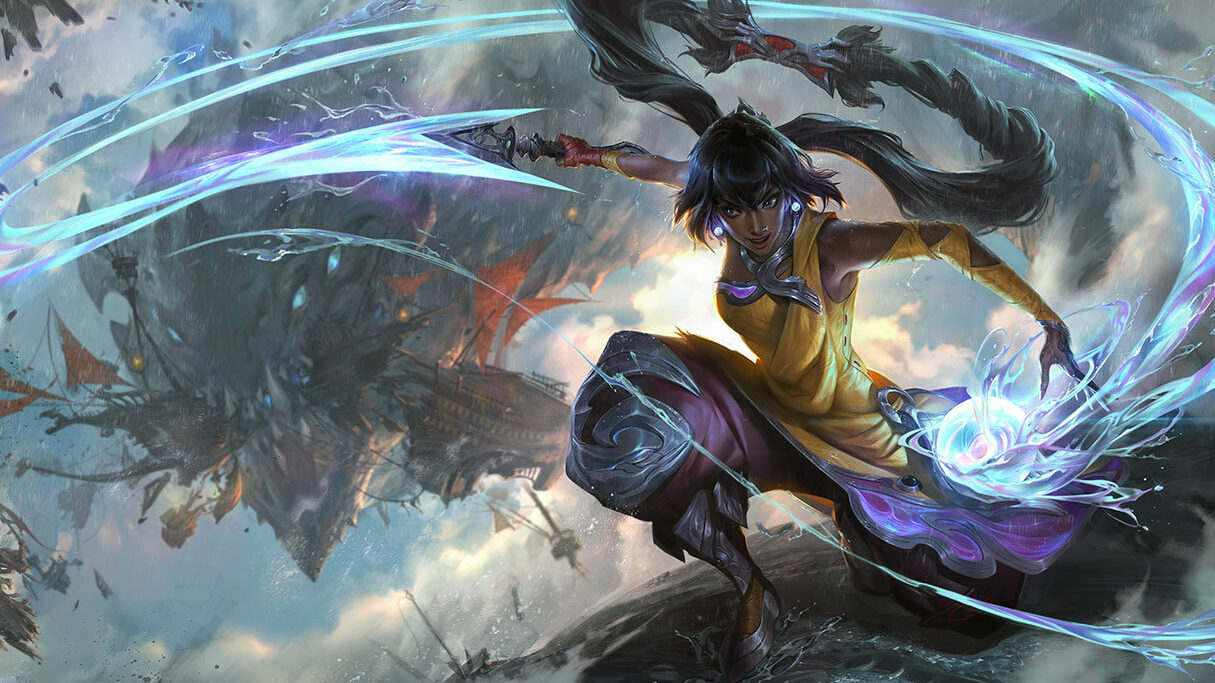 Bringing joy to the bot lane: The complete Nilah League of Legends guide

Nilah is the newest champion in League of Legends as per this guide’s release date and is a noteworthy take on innovative bot lane champion designs.

Although she isn’t a marksman, Nilah is built for the bot lane and synergizes best when she has a support on her side with whom she shares experience and utility.

Nilah is similar to Samira in terms of how she wants to go all in and hit a big combo. Meanwhile, she can be an excellent split pusher in the late game and isn’t a champion you want to take on 1v1 if she gets going.

There’s a lot to learn if you want to dive into playing Nilah, so let’s get right to it.

The ideal runes for Nilah in League of Legends

The Conqueror keystone is the way to go for Nilah, and most solo queue players and pros run it to great effect.

Going deeper into the Precision rune tree, Triumph will often be the best choice to gain a little extra sustain and gold in close battles. As Nilah wants to jump into the thick of the action, Triumph can be a lifesaver in close fights. The rest of the tree will depend on matchups, but a safe choice will be Legend: Alacrity for more attack speed, and then Last Stand to gain extra damage when at low health.

Although Nilah is still a new champion, and new build paths are emerging, players usually agree that Immortal Shieldbow is the Mythic item of choice. It has the stats that Nilah needs, and a life-saving passive that can come in handy when she engages in fights.

Others have taken a more aggressive route with either Eclipse or Galeforce, but that would only be for the most confident Nilah players. As for the secondary item, go for Phantom Dancer to get some nice attack speed and further protection. The optimal third item is usually Infinity Edge to hit that big power spike, but if you want a faster spike, then The Collector is also an option.

To round out the build, Guardian Angel and Bloodthirster can provide extra survivability in the late game, as she needs it, especially when she goes deep onto the enemy backline. Then again, Excel’s bot laner Partik “Patrik” Jírů recently went the Death’s Dance route for extra late-game sustain.

Which abilities do I max?

For the abilities, there’s only really one way to go. Max Q first, then E, W, and R every time possible.

The primary damage source comes from Nilah’s Formless Blade (Q). This is the ability that gives her range and buffs her auto attacks. Without this ability active, Nilah isn’t a thread. This is why you want to max Q first at any time.

Follow it up by maxing her dash, Slipstream (E), as it gives the necessary mobility and can be combined for a sleek little combo with her Q. At last, you want to max Jubilant Veil (W) and, of course, her ultimate Apotheosis at levels 6, 11, and 16.

How to play the Joy Unbound from start to finish

Playing Nilah can be tricky, mainly because she works differently from most other carries in the bot lane. If paired with a strong support, she can wreak havoc from the early game and snowball a lead. Otherwise, she often wants to take it slow and try to scale. She can make or break fights with her combo if she hits the late game in a good state.

Starting in lane, Nilah will look to farm up while trying to poke the enemies with her Q. Nilah works well with utility supports, as the support can help her out with poke and sustain. Since Nilah has a short range, expect to take some hits, and play some sequences carefully.

As Nilah farms up, she will likely gain an experience advantage because of her passive. As her abilities level up, she can potentially hit Level 6 before the opponents. If this happens, she can look for an all-in at Level 6 to gain a kill.

If that doesn’t happen, don’t worry; Nilah will have plenty of opportunities to impact the game later. By dashing through a target with E and pressing Q during the duration, Nilah can make quick combos and get out safely with the help of W when she gets an item or two.

This is when Nilah starts to be a menace and a scary champion to take on in a skirmish. With an early kill or two, she can snowball a lead home.

For the late game, Nilah is all about landing the perfect combo in fights. She isn’t the champion to go full ARAM with the team as she won’t provide much poke; in fact, she is vulnerable to poke. Try to spend time in the side lanes to create some pressure and join the team for big fights and objectives.

When a fight appears, it’s all about dashing in at the right moment to pull off a good ultimate. The AOE damage and crowd control from that spell can be enough to win a fight. If you manage to land that combo, there’s nothing left to say than “GG” in all chat.