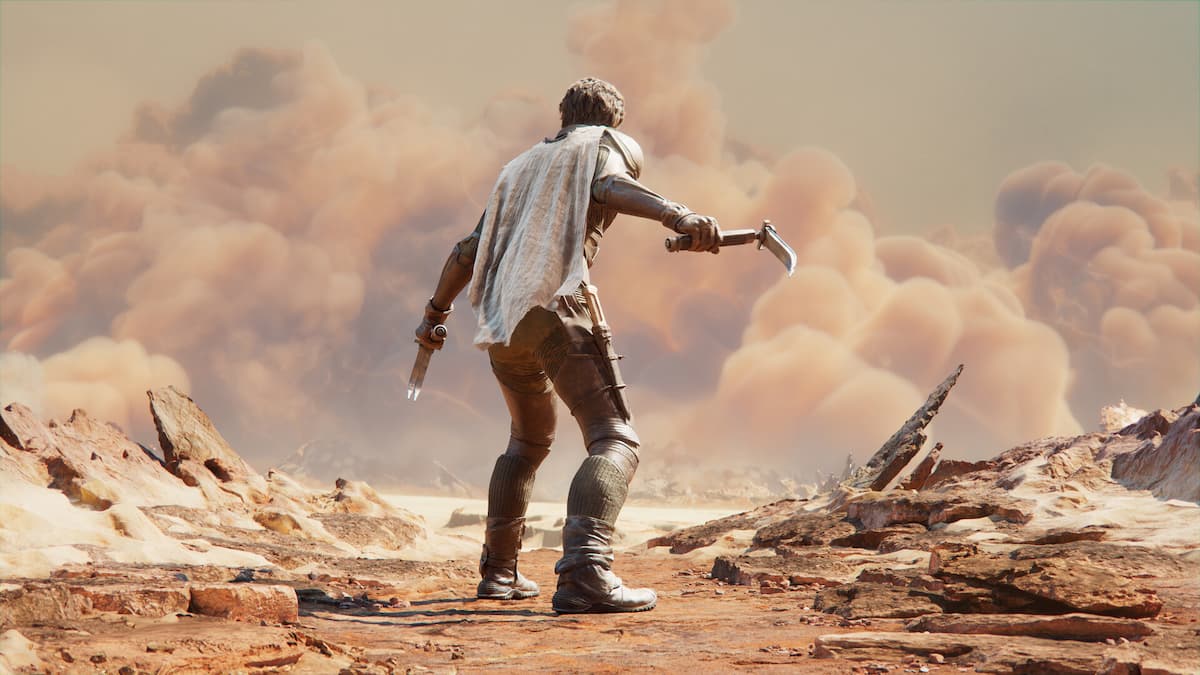 Gamescom 2022 has finally begun. There are a whole bunch of games being premiered and updated, so let’s get into it.

Gamescom 2022’s opening night was kicked off with the world premiere of Everywhere. What Everywhere is exactly, we still can’t tell you.

“We want peoplee to have their cake and eat it. Everywhere is where that can happen.”

For a minute it looked like No Man’s Sky meets Hot Wheels with some gunplay thrown in. At the end of its trailer, it looked like Cyberpunk. Seriously, we’re clueless on this one.

All we know is that it’s made by a former GTA producer – so there’s still a lot of hope behind it.

Potentially the most hype reveal at Gamescom 2022 considering its IP, it looks like this will be very heavily based on Denis Villeneuve’s depiction of Frank Herbert’s classic.

It may have only been a cinematic trailer, but if that’s the level of graphical fidelity we can expect in cinematics, this game will be beautiful.

Dune Awakening will be an open-world survival MMO, which is potentially a little disappointing. It could be fantastic, but we’d much prefer to have the freedom to roam Arrakis on our own.

‘Fear is the mindkiller’ – so too is shoddy or rushed development, let’s hope this gets the love it deserves.

The Callisto Protocol was the first of many horror survival games shown off during Gamescom 2022’s Opening Night.

In the game, the player takes control of a prisoner named Jacob Lee, held at Black Iron prison. Jacob finds himself in the midst of an alien invasion that appears to have been engineered by the prison’s warden.

It’s a fun setup for a horror survival game for sure. The gameplay also displayed a gun that seems to allow you to use the Force on your enemies, so our interest is piqued.

Violent and bloody, this game has all the makings of being a classic. We even got to see Jacob sawn in half at the end of the trailer. Brutal.

Lords of the Fallen

Like The Callisto Protocol, Lords of the Fallen was fortunate to be the first game of its genre displayed at Gamescom 2022.

It may have only been a cinematic trailer, but quite frankly, this game looks awesome. A cool, new Fantasy setting that seems teeming with lore and discoveries to be made.

Are we the only ones left feeling a little underwhelmed by Hogwarts Legacy’s Gamescom 2022 showing?

The first trailer was great. It showed us a look at a Hogwarts we haven’t yet seen and promised to put it in our hands and let us explore it to our heart’s content. This trailer? Well, this trailer felt like it maybe showed off a single level.

Okay, maybe we’re being a bit harsh. It did at least lay down a darker tone for the story and letting the characters use the Dark Arts is a bold step.

Harry Potter needs a win after Fantastic Beasts and JK Rowling’s fall from grace, we hope this is it.

You can zipline across cities, shoot yourself out of cannons, or even take part in some relaxing yoga if you so, please.

Considering the start of the trailer opened up with the goats breaking out of their farm, you really feel George Orwell would be happy with how this one is shaping up.

If you weren’t sick of Rick and Morty before Gamescom 2022, you sure will be now. We’re already sick of this game too.

Created by the series’ creator, Justin Roiland, all this game decided to display was a rather tedious seeming boss fight littered with unfunny jokes.

It may not look like Rick and Morty, but it sure sounds like it with some blatantly lazy voice-acting similarities.

Team Fortress 2 did talking guns better than this game does anyway. Sort of.

Gotham Knights is set in a Gotham without Batman, but don’t worry the Bat Family is here to save it. Well, at least Nightwing, Batgirl, and Robin are. There’s no way we’re allowing that Russian version of Arnie to be our boy Jason Todd.

The villains are designed fantastic, they look like they’ll be the highlight of this game by far. The gameplay looks very fun too, with each playable character having a unique fighting style.

It might not be the most faithful-looking adaptation, but maybe it doesn’t need to be to still be good.

Oh look, another Horror game set in a loony bin in which the player gets experimented on… yay.

In all seriousness, this game does look quite good, it will probably be a strong entry into the horror game genre.

But still, does anyone feel like all these horror games are the same nowadays? You’re either in the loony bin, or you’re up in space. Let’s get something new for a change.

Dead Island 2 was the big reveal at the end of Gamescom 2022 opening night.

The trailer was cool, it had good music and it was edited nicely.

However, We’d like to reiterate our previous point: are these games all just getting a bit samey now?

Other highlights of Gamescom 2022

Probably shouldn't have stared the night with all the good stuff, Gamescom