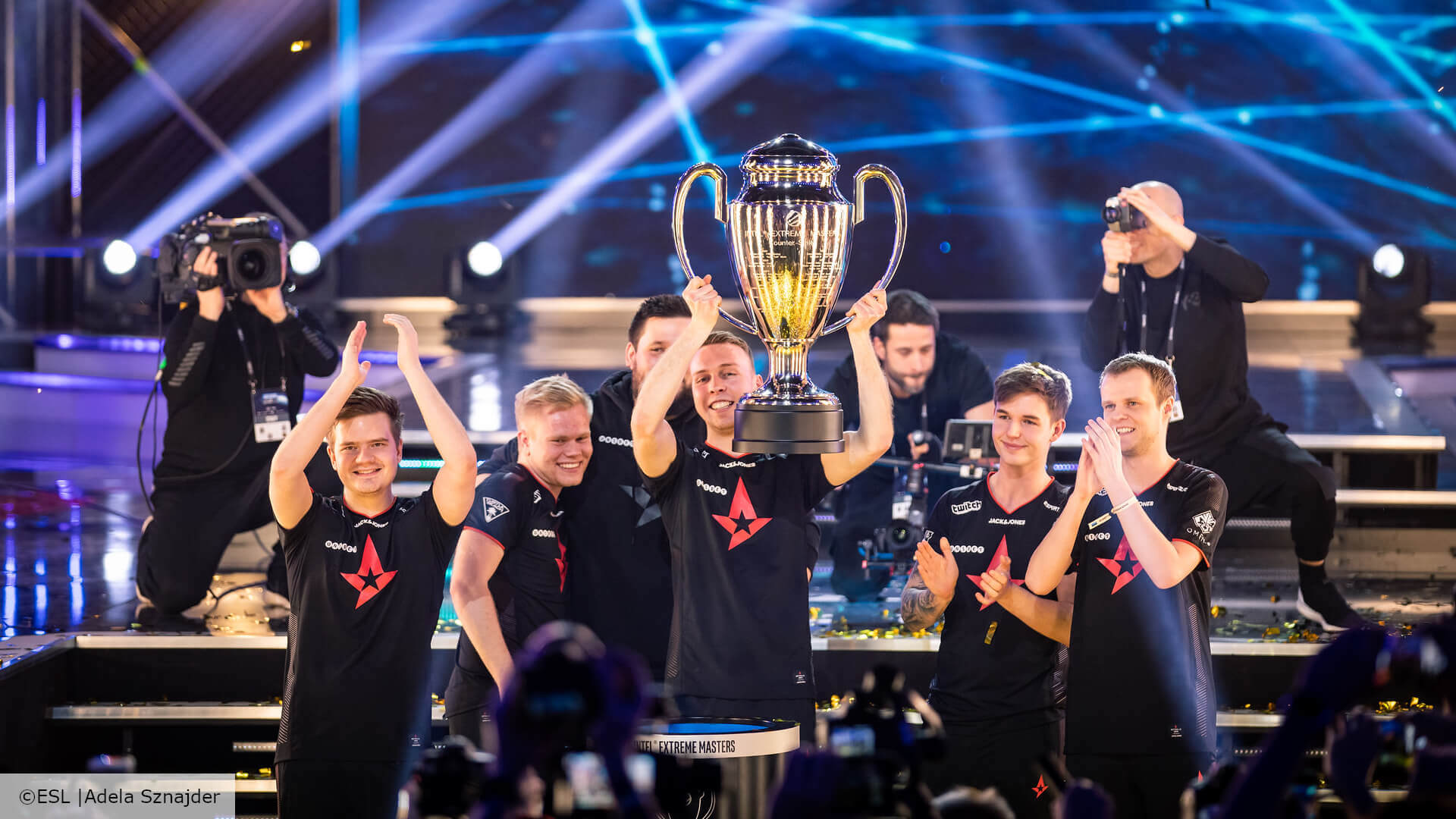 A major rebuild is needed – The Astralis Conundrum

Astralis may be the organization with the most Major wins in history, but that hasn’t mattered much in 2022. After failing to make the Champions Stage at PGL Antwerp, they won’t even be in Rio de Janeiro for the second Major of 2022, IEM Rio.

A disappointing ESL Pro League Season 16 has been followed by an abysmal IEM Rio RMR performance has left this team with no hope and in need of a change. A semi-finals appearance at IEM Cologne 2022 may have garnered some appreciation, but a performance dip such as this can not be allowed to stand.

Nicolai “device” Reedtz might be on his way back to the organization he once called home, but he won’t be enough. A player of his caliber also doesn’t deserve anything close to the treatment he received when he joined his current team, NIP.

Astralis have a conundrum, and the only way to solve it is by getting the checkbook out. Let’s get into it.

Blow it all up

When Astralis signed Benjamin “blameF” Bremmer and Kristian “k0nfig” Wienecke there was deserved excitement over what this team could achieve. They may have still had Philip “Lucky” Ewald effectively performing as a $4750 decoy, but they also had Lukas “gla1ve” Rossander and Andreas “xyp9x” Holsjeth. The former is touted as the greatest IGL of all time, the latter the greatest Support player of all time.

K0nfig had also long received plaudits for his abilities as an Entry Fragger. He may not have won as many trophies as former Astralis man Peter “dupreeh” Rasmussen, but his do-or-die, hold-W playstyle makes him one of the most fun players to watch in Counter-Strike.

His former Complexity teammate blameF had very quickly gained a reputation as an exceptionally high fragging IGL during his time with the NA organization and Heroic before that. Expectations for him without the shackles of the IGL role were high. Little did we know he would still be shackled by the limitations of his own tedious playstyle.

With a host of lackluster performances under their belt, it became quickly clear that Lucky was not fit to be AWPing on a tier-one CSGO team. A replacement was found in the form of the former FunPlus Phoenix AWPer Asger “farlig” Jensen. Once highly rated within the CSGO scene and touted as a potential future star for an organization of Astralis’ quality, it was time for farlig to prove his worth to the Danish scene.

Now we have all the pieces on the board, who are the players that need to go for the team to become a contender once more?

It hurts to say it, but the most obvious answer is xyp9x. A shadow of his former self, the ‘clutch minister’ appears to have lost all of his Counter-Strike ability. In their prime, Astralis had xyp9x to thank for a lot of rounds they had no business winning. At their lowest, they have him to thank for them not being able to kill anyone.

Often found languishing at the bottom of the scoreboard, xyp9x is easily the most washed-up player in the top 30 teams. Truly stealing a living, the intelligence that once made him such an effective Anchor player is all but gone. Now, for the betterment of the team he has been a part of since 2016, he must go too.

The final player, and we’ll admit we’re a little sad about this one, is k0nfig. K0nfig hasn’t particularly done anything wrong within the server for Astralis. He may be a tad inconsistent, and he may have failed to bring the star-power he promised, but that’s sometimes the nature of the role he occupies. He’s far from the worst offender on this team.

Unfortunately for k0nfig, it’s his out-of-server actions that have put his head on the chopping block. Eye witness reports from Malta report that k0nfig effectively hunted down a man he had previously had an altercation with inside a club. We call that the Vito “kNgV-” Giuseppe.

An organization like Astralis simply can’t let an incident of this magnitude slide, especially when it resulted in a broken ankle that prevented k0nfig from playing in the RMR event and ultimately prevented them from qualifying for the Major itself.

So there are three players that need to leave, and according to our sources, we already know that device is incoming. Who will be the other two players to step up?

With the reacquisition of device, Astralis will have the one thing they’ve been truly lacking in 2022 thus far: a bonafide superstar on the AWP. He may have spent 9 months on the sidelines, but it’s hard to imagine he won’t still be one of the best players in the world upon his return.

That being said, he can’t save this team as it is. Neither could he do so if the replacements for the other pieces aren’t capable of cutting it in the big leagues either.

The blockbuster move would be for Heroic’s star Martin “stavn” Lund. Alongside blameF, stavn has been one of the best players in Denmark for a long time. Even more so with device leaving for NIP. Heroic wouldn’t want to let him go cheaply to a rival, however, especially their biggest in Astralis.

There’s also the case of Astralis preferring to spend less than they would have to on stavn, especially after also spending so much on device. In stavn, however, they would get another superstar to line up alongside blameF and device, completing a trio that would stand up alongside the FaZe and NAVI’s of the world.

A cheaper option would be Sprout’s Victor “Staehr” Staehr. While he doesn’t have the tier-one experience of a figure like stavn, Staehr is the biggest prospect in the Danish scene right now. Destined for the top and having just qualified for IEM Rio, it might be a leap for him right now, but he’s one that would grow into his place in the team.

In an ideal world, Astralis move for stavn in their current situation. The top teams in the world all have a trio of star players if not four. Stavn would elevate Astralis into that category, something they haven’t been all year as blameF has operated as a one-man-army on the opposite side of the map to the rest of his team.

Staehr might be the more realistic option, if not slightly underwhelming for fans of the team wishing for them to go straight back to the top. The road may be longer with the youngster, but with either player, it would be a stark improvement.

Sadly for Astralis, the most obvious answer for the xyp9x problem, as he has been for a long time, is Valdemar “valde” Bjorn Vangsa. Even when valde was still on North, fans were advocating for him to come into the team in favor of the Clutch Minister.

Valde is somewhat the ‘forgotten man’ of the Danish scene. One of the country’s most consistent performers, he ended up on an island on an OG team that has never quite hit the heights that were expected of them. Valde now finds himself on ENCE, one of two stars that were brought in to replace the outgoing Lotan “spinx” Giladi.

In 2022, ENCE has been far better than Astralis. When valde left OG to join the Finnish organization, it wasn’t a sideways move, it was an upgrade. In its current form, even with the return of device and the adoration of Astralis’ home fans in Denmark, leaving would be a downgrade.

There is another option within the current Sprout roster, former Copenhagen Flames player Rasmus “Zyphon” Nordfoss. A player with undeniable talent, Zyphon is soon due to embark on his third consecutive Major after seemingly being the most unfortunate member of that CPH team when joining Sprout.

A big issue with Zyphon, however, is his removal from Astralis Talent. Having already had a difficult period with the organization and as an extension Sporting Director, Kasper Hvidt, might just mean that a return to the organization for Zyphon is off the cards, as perfect as a xyp9x replacement he may be.

Back on Heroic, further emphasizing the strength of Denmark’s second team, is Rasmus “sjuush” Beck. Overshadowed by the exploits of stavn and the highlights of Rene “TeSeS” Madsen, sjuush has long been a stable third star for Heroic. Capable of being more aggressive than xyp9x when needed, he shouldn’t have some of the same role conflicts xyp9x has had with blameF.

Knowing Astralis, however, they’ll probably just keep going with Mikkel “MistR” Thomsen and device will have to deal with another roster not fit for duty.

Getting back to the top

Even if the strength of the Danish CSGO scene may have dwindled as the CIS region and international teams made their way to the top, it’s clear the talent is still there for Denmark to have a truly top team.

With device coming back, the only way to guarantee a quick return to the top for Astralis would be to bring in stavn and sjuush alongside him. Not only that, but it would severely weaken their closest rival in Heroic. We’re sure Casper “cadiaN” Moller would be thrilled if that were to happen. The only sticking point is Astralis’ unwillingness to spend money.

The more realistic option by far is Zyphon and Staehr. Sprout has long been a feeder team, and there’s no way they expect to hold onto talent such as theirs for too long, even if this would be sooner than they expected.

That being said, Astralis have made consistently odd decisions for a while now, they’ll probably just keep xyp9x and pick up Markus “kjaerbye” Kjaerbye to recapture some of their old magic. Wouldn’t that be fun?

The point of these conundrums isn’t to be the most realistic we can be, it’s to create the most competitively viable roster. For that reason, we’re saying the Astralis roster should be:

Astralis absolutely need to spend money to fix their issues, although I suspect the issue of blameF will go unaddressed still